In the third and final part of our Trail-Trilogy, it’s time for the experts. Naturally, there are some exciting downhill tracks and trails in the Home of Lässig. Downhill bikes are much heavier than freeride bikes and have more suspension travel – in front as well as the rear. To ride up a mountain is virtually impossible. So it’s excellent that the lifts in the Home of Lässig transport bikers up to the summit. Downhillers use a fully integrated helmet, and the protectors are also more robust than those of freeride fans. Those who would like to tackle the three trails must know how to handle their bike well. There are often metre high jumps along the route meaning there is no room for mistakes. Downhill Queen Angie Hohenwarter has chosen three trails for us, which are suitable for all pro-riders. The Bergstadltrail on the Westgipfel, the Pro-Line on the Reiterkogel and the X-Line, a trail that leads from the Schattberg summit down to the village of Saalbach.

We start with the X-Line. Just as with the Hackelbergtrail we take the Schattberg lift and the trail starts next to the top station. In winter, the pistes here are known as some of the most difficult in the Glemmtal, in summer the trails are just as demanding for bikers. The upper part of the trail is a little easier and therefore ideal terrain for warming up. The challenge starts at the middle station. Angie tackles the root passages and technical sections with great enthusiasm, I have to dismount a couple of times, but practice makes perfect! As we descend, the trail becomes a little easier. Those who do not want to jump the high drops can ride another section which although is also steep and technical, is not as technically demanding as the first option and takes us down to the parking area next to the Schattberg-Xpress, from where we head off in the direction of the Pro-Line in Hinterglemm. 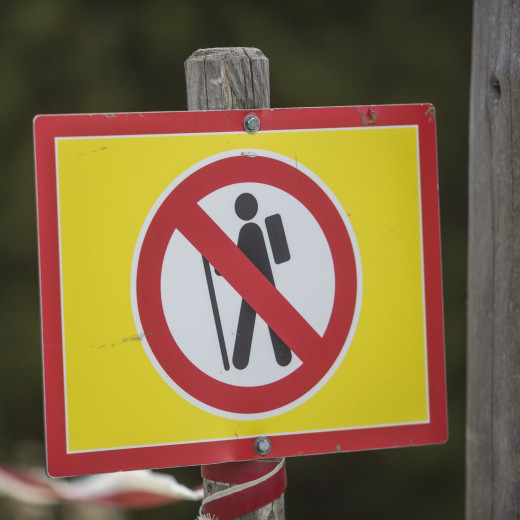 At the start of Pro-Line 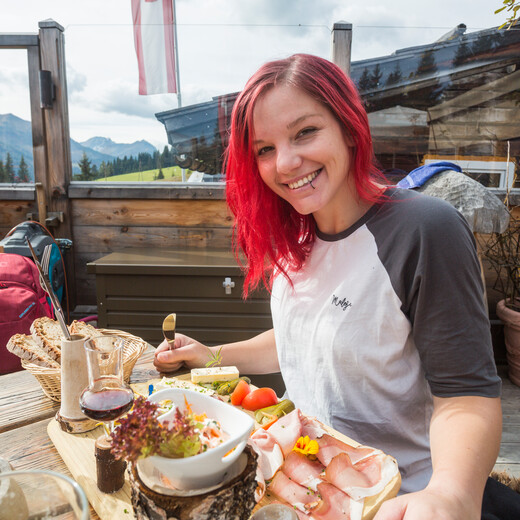 The Pro-Line is one of Angie’s favourite trails and leads from the Reiterkogel back down to the centre of Hinterglemm. We begin the trail at the wooden starting gate and make our descent on a narrow forest trail. On this section, it is imperative to have good control of the bike. One mistake normally results in the rider falling. The rocky parts require extra concentration. Angie guides me along the trail and sooner than expected we are in Hinterglemm where we enjoy a well-earned burger and a shandy.

The last trail takes us over the Schattberg up the Westgipfel. At this point, we don’t turn on to the Hacklbergtrail, but instead, take the Bergstadltrail which will take us to a mountain hut of the same name. This is a natural trail with a smattering of short key points. In between that are many flowing passages, which we are able to master without any problems. After riding a few passages over an open area, the trail takes us onto a forest path which provides shade and a chance to cool down. Once we have reached the Bergstadl, the most difficult passages have been tackled. From here we ride on the flowing Buchegg trail in the direction of Hinterglemm. We are euphoric that we managed the tricky Bergstadltrail.

The Bergstadltrail starts at the same point as the Hacklbergtrail, but the trail does not continue southward, but on the steep flanks of the Westgipfel down to the Bergstadl at the middle station of the Westgipfel lift. The mountain trail is riddled with key passages that even push the professionals to their borders. The trail is in places winding and there are often obstructions resulting in bikers having to carry/push their bikes sometimes more than what they planned for. From the Westgipfel middle station, the Buchegg Trail continues towards the direction of Hinterglemm. The trail’s characteristics are much different from that of the Bergstadltrail as it meanders through a landscape of meadows and pastures and from that perspective is much easier to negotiate than the somewhat higher Bergstadltrail.

The Pro-Line runs parallel to the Blue-Line from the middle station of the Reiterkogel lift down towards the village. At the beginning, the dominating factor is narrow woodland tracks. Further down, there are wide curves and speed passages. The Pro-Line is peppered with many gutsy technical sections, with root passages, tables, drops and many jumps. Making the Pro-Line one big playground for pro freeriders. If you simply haven’t had enough, take the turn to the passages of the Evil-Eye-Trails. Northshore elements and metre-high drops make the descent much more challenging.

5.7 km; 1,025 m; difficult
The marathon route of the trails in the Glemmtal. Over 1,000 vertical metres descent requires a lot of power. The start of the trail flows, but from the middle station becomes more difficult, with root passages and Northshore elements. On the bottom section, you can make a choice between root passages or a couple of drops. Summary: A diversified trail, or downhill track which demands a lot from riders.