Being an avid snowboarder, I used to think that I was at a disadvantage compared to skiers. My colleagues riding on two boards have the benefit of being able to go ski touring, while I have to trudge behind with my snowboard on my back. I’ve given ski touring a shot, but to a real snowboarding fanatic, there’s nothing more frustrating than standing before a perfect slope and having to ride it with “just” the skis. For #Storybase2018, I was given the chance to try out the newest alternative to both ski touring and snowshoes: splitboarding — in other words, ski touring with a vertically separable snowboard, which, with the help of bindings and ski skins, can be used to climb up snow-covered mountains as if you’re on touring skis.

Before Bettina and I embarked on an adventurous exploration of the Skicircus Saalbach Hinterglemm Leogang Fieberbrunn together with our guide Markus, a certified mountain and skiing guide, we receive a splitboarding crash course. We get our equipment — consisting of the splitboard, skins, poles and emergency gear (shovel, sonar, avalanche transceiver) — and receive useful information about snow profiles, how avalanches form and how to use the avalanche device. The most important rules of ski touring are: Never start without emergency gear and never hit the terrain alone! 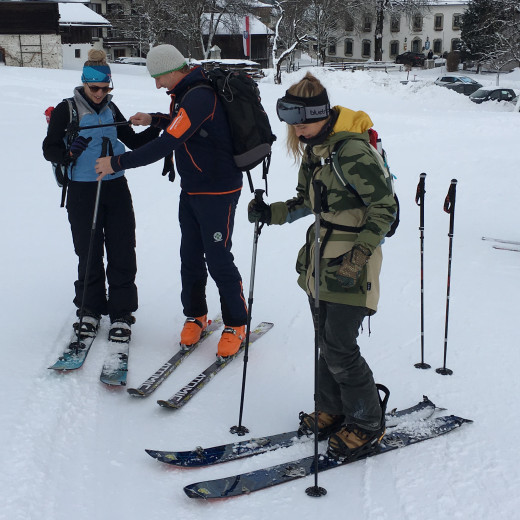 We put on the skins and start 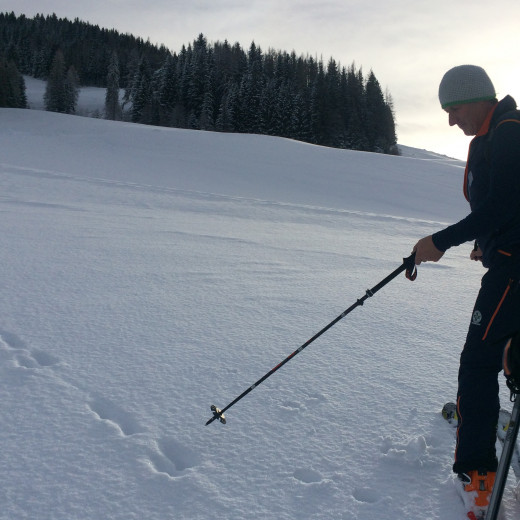 Hare tracks in the snow 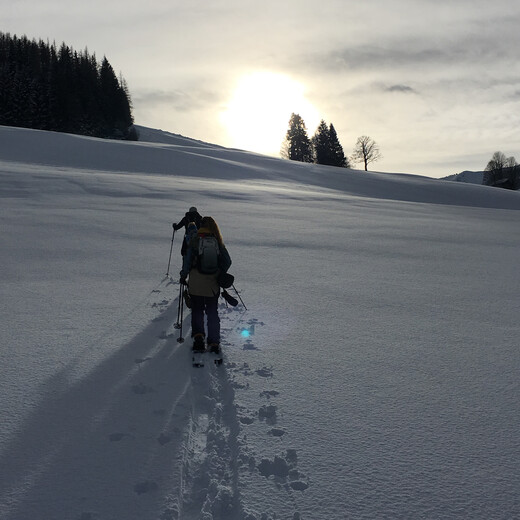 Attaching the skins works seamlessly. Markus gives us great advice by telling us not to raise the splitboard halves while walking but to push them forward instead. This quickly becomes a habit. Our tour first leads us along the ski slopes and after a few metres of climbing, we move on to the free terrain. One step forward, use the pole, breathe, one step forward, use the pole, breathe… on and on and on. In perfect synch with the person in front of me and surrounded by beautiful nature, I realise that ski touring has a somewhat meditative quality — despite the exertion. It’s crucial to save your strength, because, after all, we’ve got a two-hour-long climb ahead of us. All that effort for just one single run.

Markus keeps telling us: “Touring is for lazy people. We’re always looking for the easiest route!” During our climb, Markus tells us all kinds of things about the natural world, the weather and the animals here in the region. How can you tell which animal made its way through the snow based on its tracks? Rabbit tracks are easy to spot, as the tracks look like a face with eyes, nose and mouth. What I didn’t know was that the “eyes” are from the rabbit’s hind legs. Thus, if you want to determine its direction, you have to go by the eyes. The traces of snow on the spruces, on the other hand, help us determine the direction of the wind. Additionally, Markus shows us the snow profile here. Using his avalanche shovel, he digs a cross section through the snow, all the way down to the ground. Using our fingers, we test the consistency of the various snow layers as Markus explains that the different degrees of hardness can potentially trigger avalanches. Having arrived on top, I rest for a moment and look at the tracks that we have left behind in the deep snow. 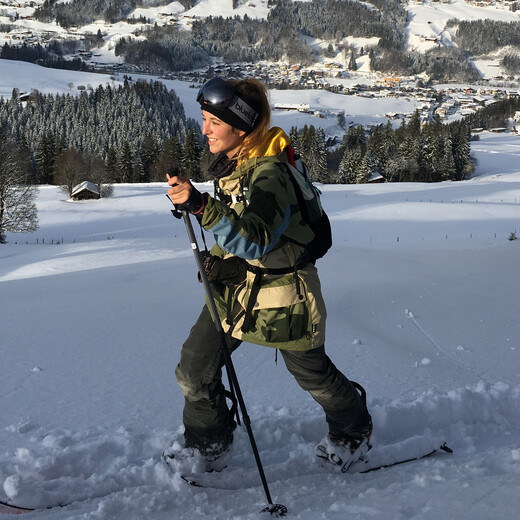 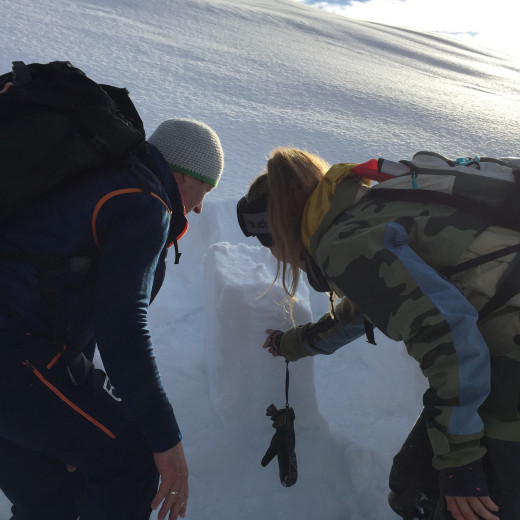 We test the snowlayers with our fingers 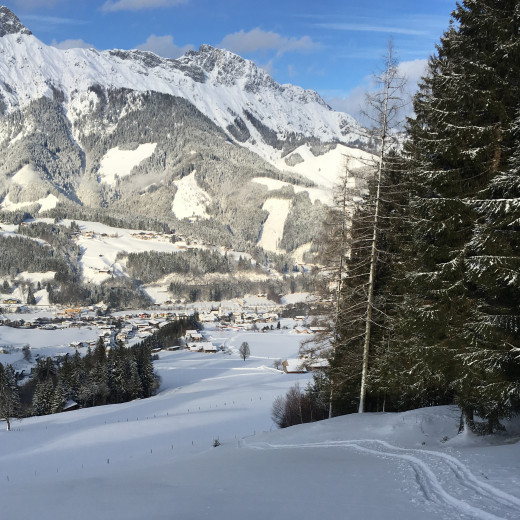 Our ascent-track in deep powder

Then it’s finally time for the descent, but first comes the conversion of the splitboard: I take off the skins, twist off the bindings and refit the board from split-mode into ride-mode. I reattach the bindings and pack away the poles. We’re finally closer to the moment we’ve been waiting for. The temperature is a little cold, but the view is incredible. Bettina passes her flask around one last time and then it’s finally time for action.

Each one of us has enjoyed the climb, but what we’re really here for is an unforgettable powder run. In the deep powder snow, the split board really gets to show off its strengths. The run looks incredible: untouched powder snow. The snow consistency is constant and the only thing we have to pay attention to is to focus on the line that we want to ride. I surf the snow and make a few awesome turns, and my thighs are on fire. 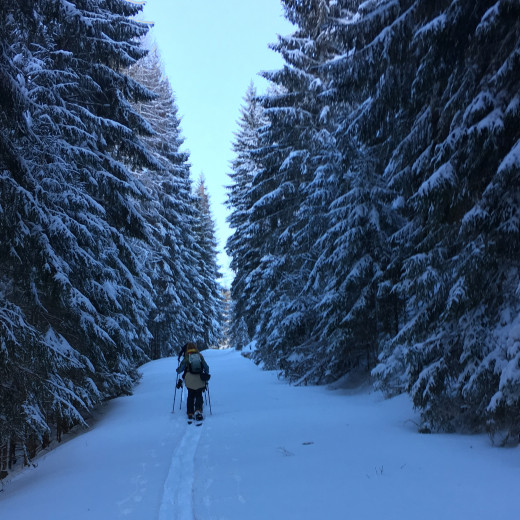 We continue through the forest 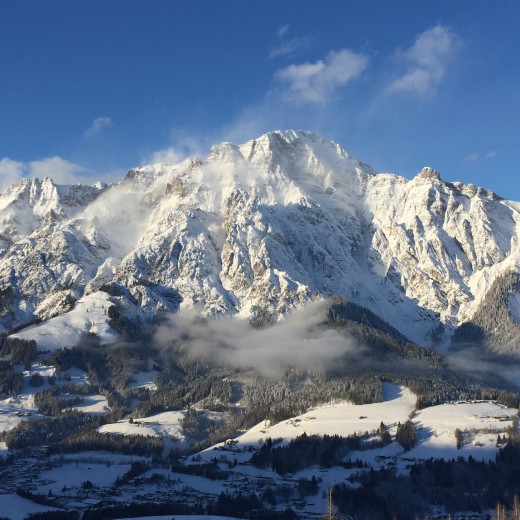 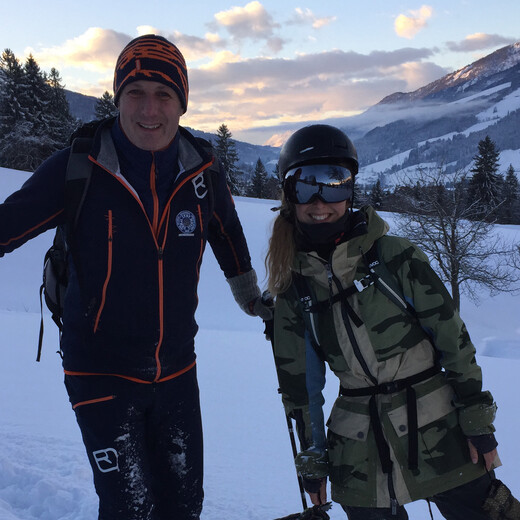 Posing with my guide Markus

Even though all the effort was just for a single descent, it was absolutely worth it! It’s simply an entirely new experience to travel with the splitboard. You’re far away from the slopes. It’s much quieter and you’re surrounded by gorgeous nature. I will definitely do more splitboarding in the future. I simply love snowboarding and riding in the deep snow whenever and wherever I can. I don’t really care whether I get there via lift, snowmobile, the splitboard or maybe even via helicopter one day. I JUST LOVE TO RIDE!

5 reasons to spend the holidays with friends