How the perfect Skicircus slopes are made

What a delight it is when you are the first on the mountain and get to gaze upon an untouched slope before everybody else: Like a white carpet, the freshly groomed track extends from the summit all the way to the valley! But how exactly is every skiing fan’s favourite rippled snow created? And why is the rippled surface pattern the best for skiing? What does it take to operate a 13-ton vehicle and what makes a good snowcat driver? Why do you need GPS when driving a snowcat? On my search for answers to these questions for Saalbach Stories, I take a peek behind the curtain and join the slope groomers of the Hinterglemmer Bergbahnen company during their work.

The grooming process begins as soon as the slope service’s final inspection drive has been completed, when the holiday guests are busy with their après ski celebrations or are off to some fine dining after the slopes close at 17:00. At night, the traces left behind by the winter sports enthusiasts are removed and the slopes are returned to top-notch form. But I begin my research before the start of the season and thus I have the rare opportunity to witness the slope grooming works during the day.

It’s -12 °C when “my” snowcat comes to pick me up with its orange blinking lights at the Hochalm valley station in the powder snow and I can’t help but be surprised. With a friendly smile, Michael Hasenauer greets me from his driver’s cabin. Michael was the Maroldengut farmer from our story about haymaking. Wearing short sleeves, he sits on his driver’s seat and brings the heavy machine to a halt right in front of me. And that already answers my first question: It doesn’t seem to be a particularly cold job. Happy tunes sound from the radio and from time to time, a message can be heard from his boss or one of his colleagues. “Thanks to the GPS system, my boss always know where I am. But you have to be ready for the loneliness, because after working 8 to 10 hours in the darkness, and around the mountain during any and all weather conditions, you quickly realise whether you’re cut out for the job or not.”  Michael was only 19 when he started working as a snowcat driver for the Hinterglemmer Bergbahnen company. Since 2015, he has been working at the workshop, but he likes to work early duty for his colleagues occasionally. I take a long look around the cabin and notice two things: Everything is super high tech and it’s actually pretty cosy. 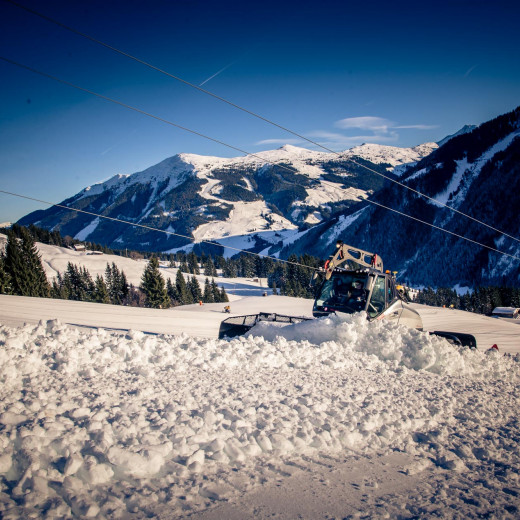 The grooming process on the slope with powerful engines. 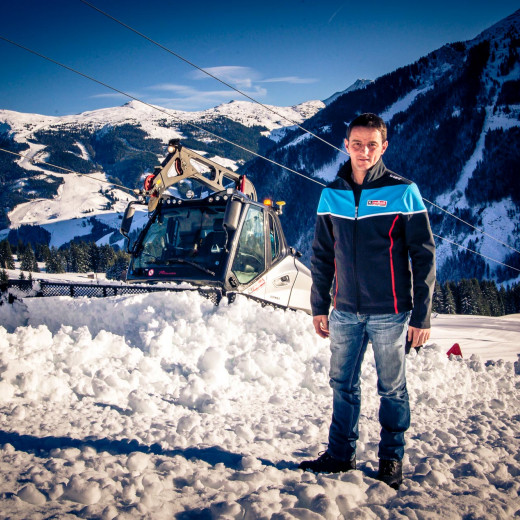 Michael Hasenauer in front of his piste basher 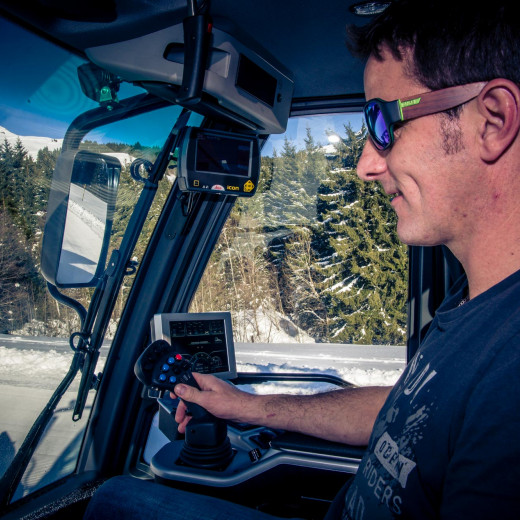 The cabin is pretty cosy

High tech in the cat

Sitting in the passenger’s seat gives me a good shake as we drive across the still ungroomed slope. Michael, sitting in his airsprung driver’s seat, barely notices the bumps and leans back into his heated throne. His hands are resting on different levers and a kind of joystick. With his left hand, the controls two levers which in turn control the tracks of the snowcat. With his right hand, he either lowers or raises the 12-way shield in front of the snowcat via the joystick, employs the mill or uses the gargantuan windscreen wipers. Good visibility is important and Michael explains: “The front and side screens have heating to make sure that the glass doesn’t freeze during a snowstorm. When the fresh, powdery snow falls, your vision is quite limited. There is also a small camera on the rear end of the snowcat which shows what’s going on behind the machine.”

I ask him which snow is the best to groom and after a short pause, he says, “Artificial snow! It’s the perfect base and its compactness helps protect the turf.” For the beginning of the new season, the preparation of the slope unfolds in three steps. First, the technical snow, collected and formed into big heaps during the cold nights, as well as the natural snow, are roughly divided across the slope. Now, the GPS devices are used, because the Skicircus’ slopes were measured aerially via GPS during the summer and captured in the maps. The monitor displays the various levels of thickness of the snow in different colours. Red means little base and blue means lots of snow. This helps the team even out the snow efficiently and get rid of weak spots. Michael gestures at the monitor and says: “We still have to even out the red area in front of us, then we can begin the rolling process.” 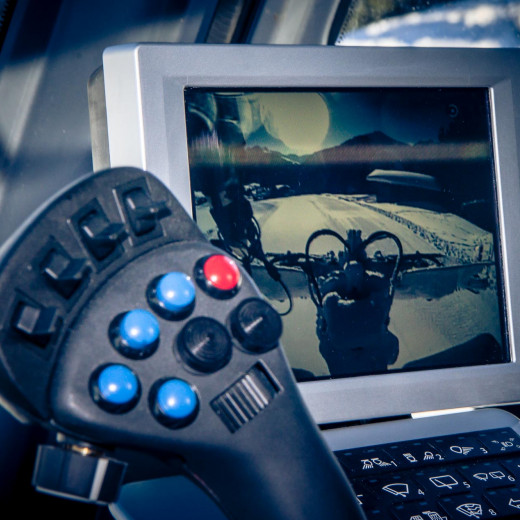 The rear view on the monitor 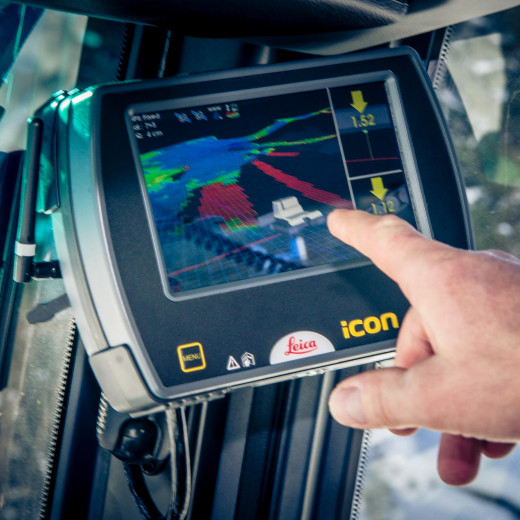 The monitor displays the levels of thickness of the snow 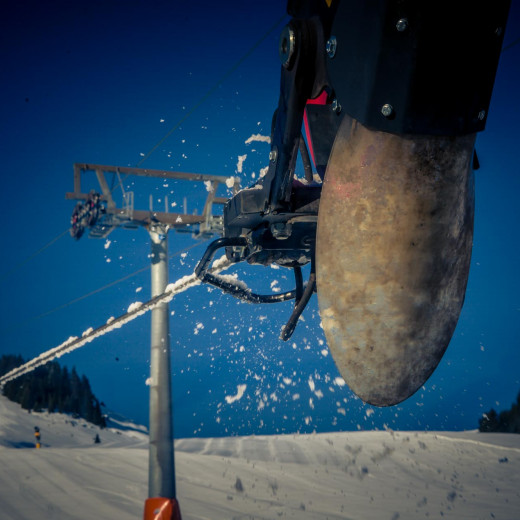 The winch of the piste basher

Why the ripple pattern?

The rolling process is the second step and requires Michael to connect the 510-HP-strong machine to the winch. The 1,200-metre-long cable creates a pulling force of maximum 4.5 tons. The roughly spread out snow is now pressed down on with enormous force and is then raked with the mill on the rear in the next step. Michael points at another small monitor next to the joystick. Where speed, temperature and engine information were displayed a moment ago, I can now see the finely rippled snow that is slowly emerging from behind the snowcat.

I ask Michael why it has to be this pattern and he says, “The grooming of the slopes is its own science and the engineers have put a lot of thought into the development of the snowcat. The larger surface of the rippled pattern - we call it finish - allows the cold to better make its way into the snow. Snow research has also shown that it’s best to let the snow rest for a while prior to grooming it. And it’s also best for grooming to let the skiers compress the fresh now first before grooming it.” Why grooming would be unfathomable and too dangerous during running ski operations, Michael explains as follows: “Everyone wants to be the first to hit the freshly groomed track, which may result in the person coming dangerously close to the snowcat. Additionally, we work almost exclusively with the winch these days, which makes the slopes very dangerous!” During our next ride uphill, he demonstrates what exactly he meant by that. He drives up the slope in parallel to the track itself and the cable, which digs itself firmly into the ground, briefly disappears. Loaded with tension, the cable releases itself with enormous pressure and whips across the slope for 20 metres. “On every slope that we groom with the winch, there is a flashing orange light warning about the danger. This is why it’s crucial to adhere to the slope closure which begins at 17:00.”

A sixth sense for snow

After countless mountain and valley rides, the fine ripple carpet looks picture-perfect and I ask Michael, “What exactly makes one a good snowcat driver?” “It’s best if the snowcat driver himself is an enthusiastic skier too. Then he knows what it’s all about. It’s important to maintain evenness and to prevent irregularities between the individual tracks. As an experienced slope service worker, one also gets to know their slopes and doesn’t lose track, even when visibility isn’t perfect. I also drive to other ski areas in Austria, Switzerland or South Tyrol every year and, of course, I have a look at how grooming is handled there. I think we’re ahead of the curve at the Skicircus and we all have a sixth sense for snow!” I want to know whether he ever gets to take pleasure from his freshly groomed slopes himself and he happily proclaims. “Yes, tomorrow is my day off and I’m taking my daughter’s class to the slope. Then I’ll be able to enjoy every single centimetre of my fine ripple snow myself!”