When all is quiet on the mountain

The last days of the winter season are gradually drawing to a close and as the conditions are still good, I have put my skis on for the last time to enjoy some spring skiing. Spring has sprung in the lower part of the valley and it won’t be too long before buds are sprouting through the snow on the higher ground. I take a seat on the Sunliner chairlift for my last ascent up towards the summit.

At the top station I meet the Operations Manager, Jakob Niederseer, who provides me with an overview of the last day. “It’s hard to believe that as of tomorrow all will be still and quiet here on the mountain. What happens when the last gondola and chairlift pull in to the top station this evening? Is it time for you to go on holiday?” I enquire, and Jakob Niederseer laughs. “No, the closing down process takes a little longer. It is not just that we press the ‘off’ button and go home. There is quite a bit more work that needs to be completed by our team”.

Together with Peter Rieder, Jakob Niederseer works as the Operations Manager and is responsible for the area between the Sunliner and the Bernkogel. The trained electrician has been with the Saalbach lift company since 1977, initially as a machinist and since 1996 as an Operations Manager. After so many years, the post winter cleaning up process has almost become routine: “At the end of the season, the chairlifts and gondolas are taken into the lift station. The chairlifts need to be dismantled and taken into storage. Winter personnel help with the dismantling and storage of the lifts. The piste basher drivers spend the following days assisting the lift attendants and rescue drivers in clearing the entire area alongside the piste. The large yellow and orange protector mats, as well as those that cover the mobile snow cannons also have to be removed. The fixed snow cannons are covered with tarpaulin in order that they are protected from the intense UV rays throughout the summer months. Electricity is switched off for the 90 fixed snow cannons on the Bernkogel and the mobile cannons are transported away by the piste machines.” My eyes sweep down towards the valley and swiftly back up the mountain: “Where is everything stored between seasons?” Jakob Niederseer explains that in the cellars of the valley and top stations, there is sufficient space to store for all the equipment. 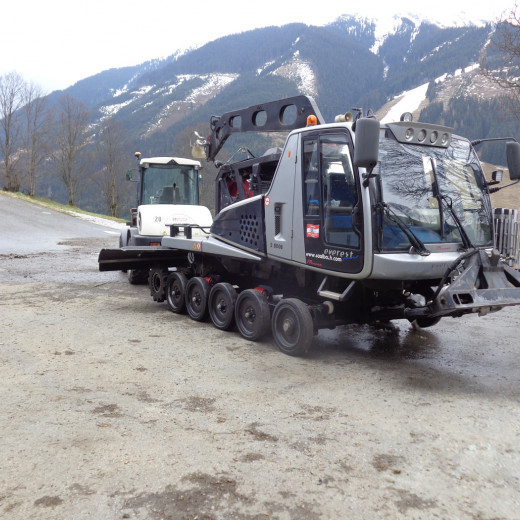 Blade, tiller and chains are demounted. 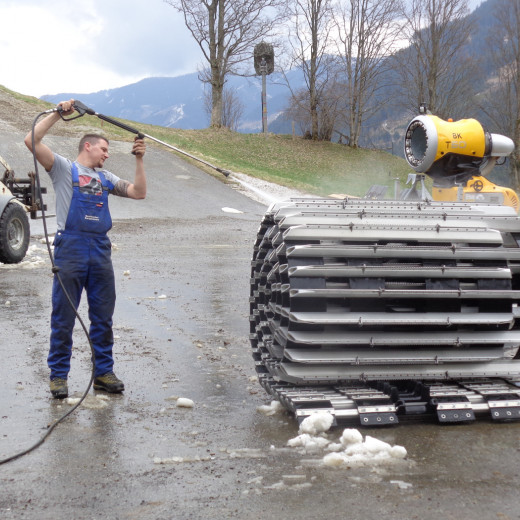 The chains are cleaned. 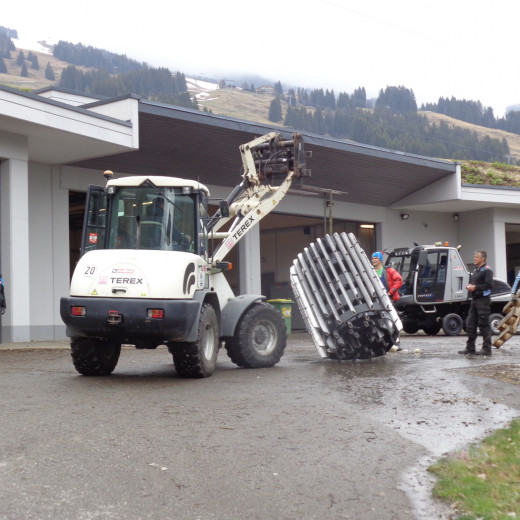 "And what happens to the piste bashers in summer?” I ask, as I cast my eyes in the direction of the valley station. “There are numerous workshops in the region. The piste basher drivers must firstly clear the roads leading to the lift stations before removing the large chains, weighing approximately 1000 kilos, from the vehicles. The chains are then serviced and packed away in large boxes. Other machinery must also be dismantled and after inspection, stowed on shelves especially designed to hold such a heavy weight. It is imperative that an experienced employee supervises the whole process in order that all items can be easily found at the start of the next winter season. The workshop is manned all year round and there is a lot of work for the mechanics: over the next weeks the axles from the piste bashers will be removed, which is the reason the heavy chains have to be taken off all the piste bashers in order that a complete service can be carried out. Now is the time to take care of the summer vehicles, tyres must be changed and vehicles serviced. Every gondola and chairlift has to be individually inspected on an annual basis.” 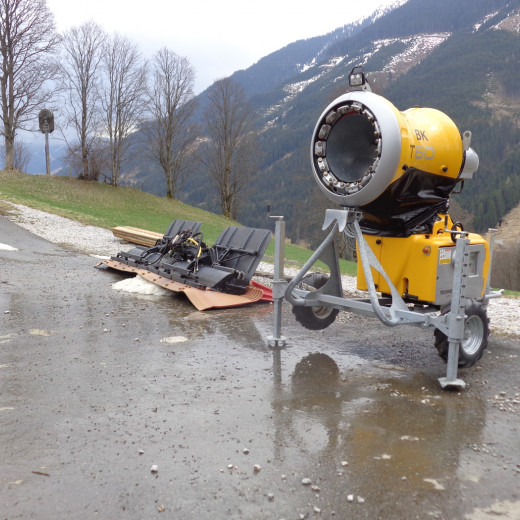 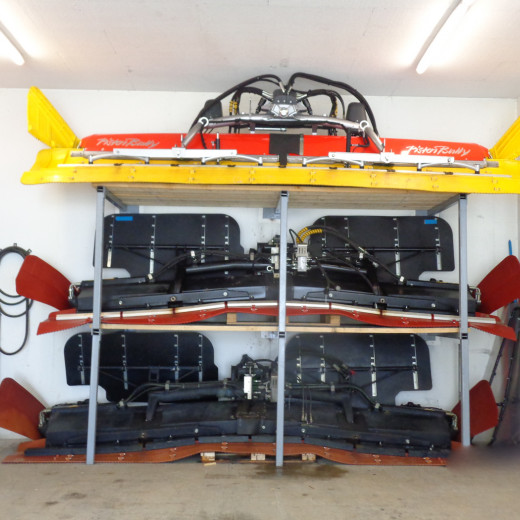 The blades of the snow groomers. 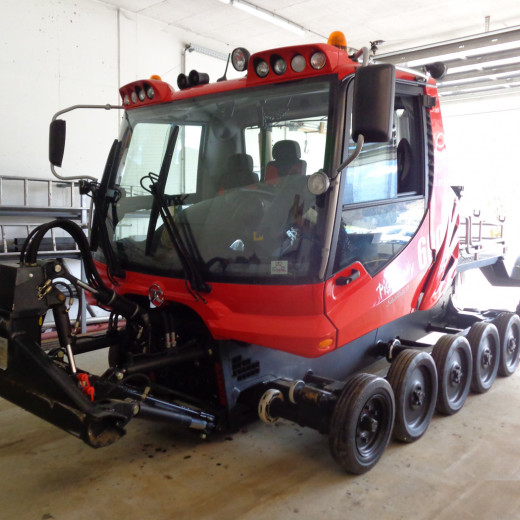 The snow groomer is ready for inspection.

From pistes to green pastures

My goodness, there is much work to be carried out over the next days, but as I close my eyes and let my thoughts wander, I find myself thinking that in just a couple of weeks’ cows will be grazing on the higher pastures surrounding the summit and hikers and bikers will be out and about enjoying themselves. Jakob has read my thoughts and commented “As well as storing the winter equipment away, it is time now time for discarded rubbish, alongside the slopes to be picked up. Once the last of the snow has melted and the two-week holiday is over, fences must be erected. In late autumn, all fences are removed to enable skiers to make their way down the piste in winter, but in spring electric fences are re-erected. At the same time, any ground damage is corrected, although these days thanks to good artificial snow cover and other contributions, damage is minimal. So, now the mountain is ready for our four legged friends. From June onwards calves will graze on fresh green grass.” 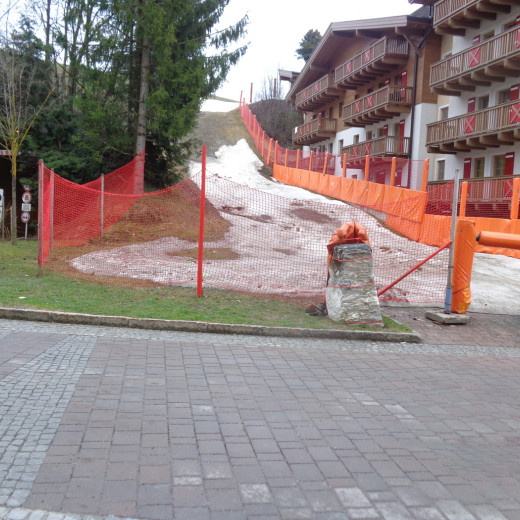 All snowfences and mats have to be demounted. 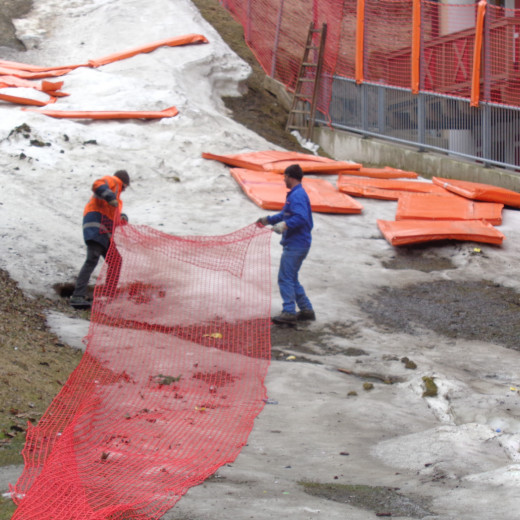 The snowfences are rolled up. 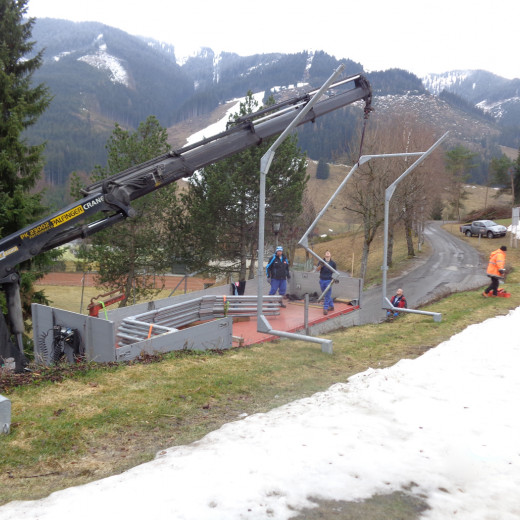 Also the framework for the snowfences is demounted.

The Saalbach Hinterglemm lift companies commence with necessary repairs at gondolas which also run in the summer immediately after the winter season. For lifts that will not be in operation until the next Winter, repairs commence in the summer months. Snow making equipment as well as the reservoirs and pump stations are regularly overhauled. “Along with various construction works in the ski region, there is plenty of work”, states the Operations Manager with a grin on his face. “But for now, once the main clear up has been completed, we are all looking forward to a two-week holiday!” I ask whether he has a ski holiday planned, to which a vehement shaking of the head is accompanied by the answer “After a season where I have had my skis on every day, I am happy not to put ski boots on – they will be stored in the cellar until next winter.” I say cheerio and head down the piste for my last run of the season, I will return to the mountain in the near future, but on my mountain bike.