What actually happens on the ski slopes while we holiday guests are still lying comfortably in our beds?

Particularly during peak season, there is quite a lot going on in the Skicircus Saalbach Hinterglemm Leogang Fieberbrunn. Several million people flock to the Glemmtal Valley in the winter season. Everything on the mountains is prepared for winter sports enthusiasts in the evening and at night, but also even early in the morning. I pulled myself out of bed extra early and had a look around on Bernkogel in Saalbach.

Hannes Geisler reports for his early shift. He has been driving a snow groomer for 16 years. He also gets up full of enthusiasm at night in order to groom the ski slopes. But he also says, “You have to enjoy doing this.” There was fresh snow during the night. For the drivers of the snow groomers this means that they not only have to groom the slopes at night, but also once again early in the morning before the ski lifts start running. In particular, the flat sections of the slope must be groomed a second time in order to be able to offer optimal snow quality for skiers.
Hannes Geisler leads eight employees and is responsible for the Bernkogel and the adjacent slopes.
The snow groomer drivers keep a watchful eye on the weather report. Only this way are they able to decide whether they only have to groom the slopes at night or also in the morning. In the process, everyone has their specific section and knows at which spot on the slope how the terrain must be groomed. “On steep sections, we hook onto a cable winch on the upper part of the steep slope, otherwise the snow groomer would slide away,” explains Hannes Geisler. He adds, “Before driving, you also have to look where you can best negotiate the terrain. You really have to know the mountain. But that also comes with time.”
In the snow groomer cabin it is nice and warm, the radio is playing in the background. The vehicle operated by Hannes Geisler can handle a five and a half metre wide section of the slope at once. But the vehicle also weighs 14 tonnes and consumes up to 250 litres of diesel per night.

In the valley, Johann Maurer is also coming to work now. He is one of two operations managers at Bernkogel. This means that he has a specific area of responsibility in which he supervises. He must ensure that everything is in order with the lifts and ski slopes in his area. Since the Bernkogel cable car to the middle station is stationary at night, it is restarted early in the morning. “Now we first make an empty run for five minutes,” he explains. In concrete terms this means that only the cable of the cable car is turning and the gondolas are not yet mounted. The empty run causes snow and ice to unloosen through the movement and vibration of the cable. In addition, the machine operators can check whether everything is in order with the cable. “We also measure cable tension and other things every morning,” says Johann Maurer, and “then we enter all data in a book.”
Four gondolas of the Bernkogel lift hang in the bottom station at night. The last employees come down from the mountain with them in the evening, and in the morning they return to their workplace with them. In addition to the gondolas, today there is a stack of milk cartons and a trolley – fully laden with potatoes and other foodstuffs. “We are bringing this delivery to the huts at Bernkogel that offer food and beverages,” explains Jakob Niederseer, the second operations manager at Bernkogel.

The first gondolas open and the employees of the top lift stations, who in the meantime have arrived for work with their skis, get in. They chatter excitedly. The team is exclusively comprised of men – this doesn’t have to be the case, but up to now very few women actually work at the lift stations in the skiing area.
Two stragglers hurry around the corner. They board the next gondola and put their skis in the holders on the outside of the gondola. Gerd Höller and Robert Schernthaner are part of the ski patrol team. They are also responsible for the section of the Bernkogel ski slopes. But altogether there are more than 30 ski patrollers on duty in the entire Skicircus. “We only provide first aid,” explains Gerd Höller, adding, “we are not allowed to give injections. A doctor does that.” The ski patrollers mainly rescue and treat those who are injured on their section of the ski slope. But in addition they also check barriers and signage on their slopes. “The ski patrol checks a ski slope on a regular basis. They must repair safety fences, re-erect signs that have been knocked over or secure the snow cannons,” says Jakob Niederseer. Three times a day, the ski patrollers take a control tour on their skis.

If you ride with a gondola from the valley to the middle station, the snow cannons on the empty slope especially attract attention. They stand on and alongside the groomed area, like large yellow monsters. Operations manager Jakob Niederseer says that 95 computer-controlled snow cannons are utilised at Bernkogel alone. For every section of the skiing area there is also a person who is responsible for the snow cannons: the snow-making manager. He decides when, where and how much of a specific area is covered with artificial snow. And the snow cannons work properly: in this season alone, more than 3,000 cubic metres of water have already been used to make artificial snow. The resulting artificial snow is distributed on the slope and packed by the snow groomers. Now – in mid-February – the cannons are already out of action. Jakob Niederseer explains, “Soon it will be March, and then it is just one more month in which we have skiing operation. Yes, the farmers also want to use their alpine meadow again at some point.”

In the meantime, the four gondolas coming up from the valley have reached the middle station. Now Christian Ralser’s workday starts here. He is a machine operator and has already been working at Bernkogel for 25 years. A total of 82 gondolas are part of “his” cable railway. Every morning during the season, or also for special trips, these gondolas are hooked onto the cable at a distance of 58 metres. So in addition to the four “employee gondolas”, 78 other gondolas also have to be hooked onto the cable. These gondolas always spend the night in the cellar of the middle station. Now Christian Ralser slowly navigates the gondolas – one after another – over a lift up from the cellar and hooks them onto the cable. What an effort! “For safety reasons we are not allowed to leave the gondolas outside overnight,” explains the machine operator. Once the skiing operation is in progress during the day, Christian Ralser is also responsible for the safety of winter sports enthusiasts. This means that he also decides when a cable car is shut down, for instance due to weather conditions. Then the cable railway must “run at idle”, and no more new guests are transported from the valley up to the mountain.
All employees who work further up on Bernkogel are brought from here to their workplaces by lift or with the aid of vehicles. They are all ready for the great rush of skiers and snowboarders who will soon populate the ski slopes.

Hannes Geisler has reached the valley and steers the snow groomer into the large garage. He has finished work for today. Geisler also works in the garage after the winter season, because in the workshop accommodated there, he and a colleague take care of the maintenance and servicing of the snow grooms. Hannes Geisler knows from experience that snow groomers are very maintenance-intensive.
The skiing operation at Bernkogel starts at 8:30 am. All gondolas must be hooked onto the cable railway by then. Shortly before 8:30, the cable car is usually idle for a few minutes. In particular, this is the well-known “quiet before the storm” in the peak season. The employees at the ticket offices also see it this way.
In the afternoon, the employees of the mountain lifts as well as all hikers, skiers and snowboarders should have left the mountain by 5 pm, because then the large garage door at Bernkogel opens and the workday starts for the snow groomers. 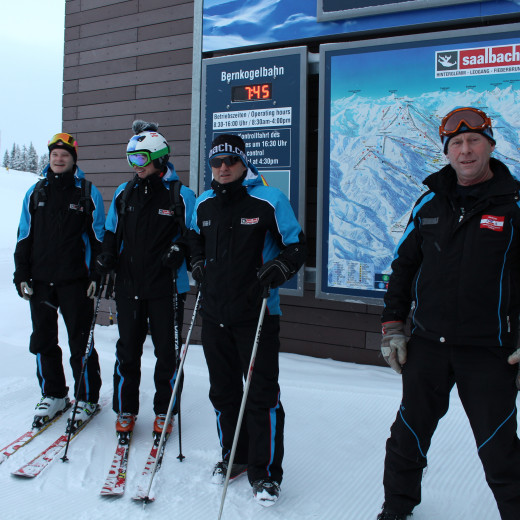 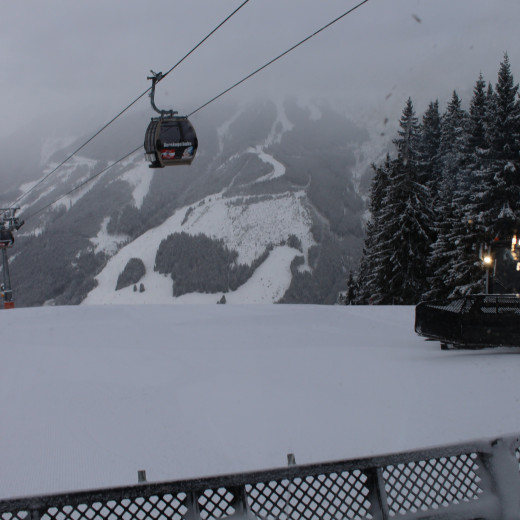