Ryan & Charlotte in their temporary homebase in Saalbach Hinterglemm

"Who are Ryan and Charlotte?" I initially thought when Paul, in charge of social media at the Tourist Board, excitedly told me that the two spend the winter in Saalbach Hinterglemm. Paul, himself a passionate musician, explained, "Charlotte is the bassist of the band 'The Subways' and her husband Ryan is the drummer of ‘Reverend & the Makers'!" I am intrigued!

A rest during touring break

At the first Bergfestival in 2013, I was even among the dancing spectators when "The Subways" rocked the stage during heavy snowfall. Meeting the two on the sunny terrace of the Rachkuchl hut at the Schönleiten middle station can therefore "almost" count as a reunion! As the two descend down the slope, stop at the hut and take off their skiing helmets, I first only see bronzed faces and happy smiles. At lunch in the sun, the two rock stars tell me, "To spend a winter in the mountains – it’s what we really have been wanting to do for six years. But since we are almost always on tour with our bands, this was never possible before. As soon as we knew that we could finally take a break this winter, it was immediately clear where this time-out would take us: to Saalbach Hinterglemm! At the first Bergfestival we already fell in love with this region! Even though we have travelled extensively from America to Japan, and been to numerous ski resorts – Saalbach Hinterglemm just captured us."

So Charlotte and Ryan packed their bags at the beginning of winter and moved from England to Saalbach Hinterglemm. The two have never had as much ‘together time’ because of their touring schedules as musicians. They say, "We've known each other for nine years and have been married for seven years, but we've never been together for so long." Charlotte laughs and adds, "And we still love each other! Ryan has taught me to snowboard here in Saalbach Hinterglemm. After the first four days I wanted to give up, but now it's really fun! I myself am a skier since I spent some time in Austria on a school trip. Ryan first started enjoying winter sports through me and is now an enthusiastic snowboarder." 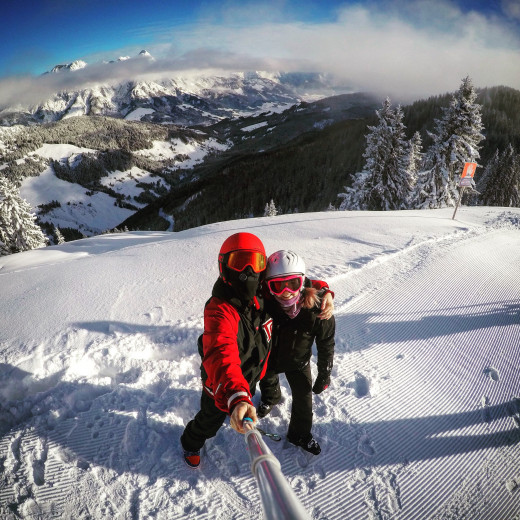 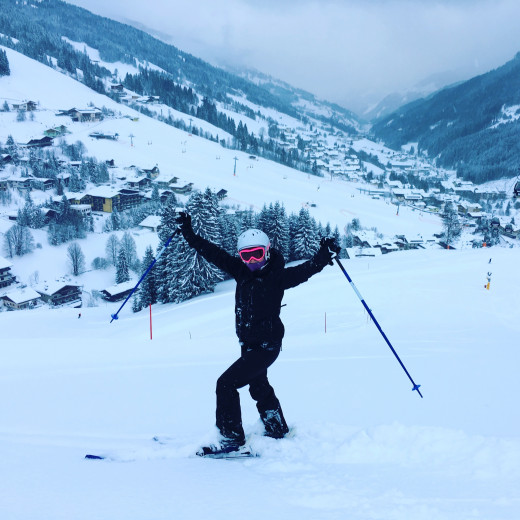 Charlotte in the snow 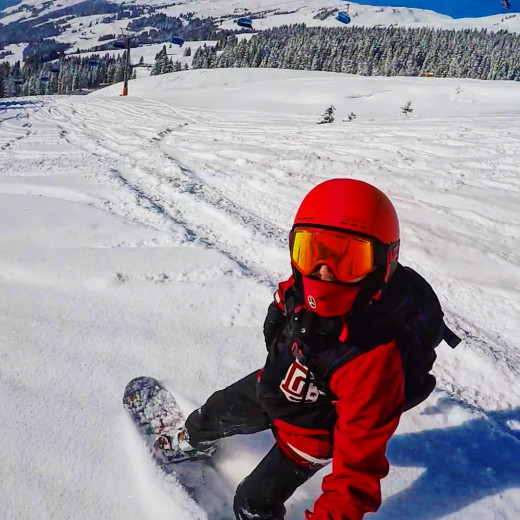 Boredom? Impossible!
After a few months in Saalbach Hinterglemm, the two rock stars are thrilled about their temporary domicile. They enthuse, "The diversity of this region is probably unique. The amount of slopes is enormous and on top of that, the many freeriding possibilities – for us it’s just the coolest place! Meanwhile, we have already made friends in the village and recently a few locals took us to our first freeriding tour in the fresh powder. Unforgettable! The atmosphere here is amazing and it is simply impossible to get bored." Their days are, as they say, full of action. "Every day, we are the first at the lifts! Sometimes we have to take a forced break on Friday – this is usually because of the Freestyle Show Night on the evening before. The people here are just super easy going, and we've also met some musicians, like the guys from “Left Hand right”." 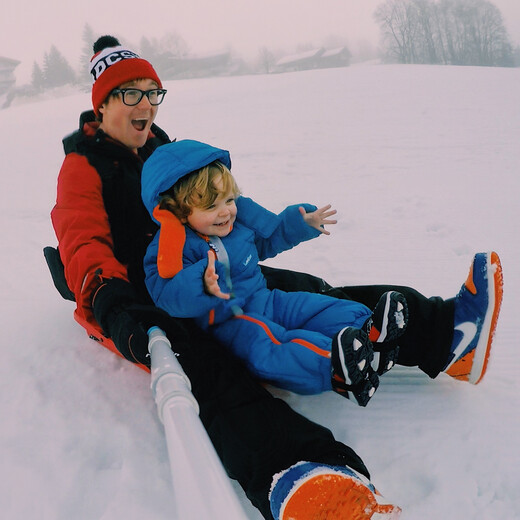 Fun in the snow 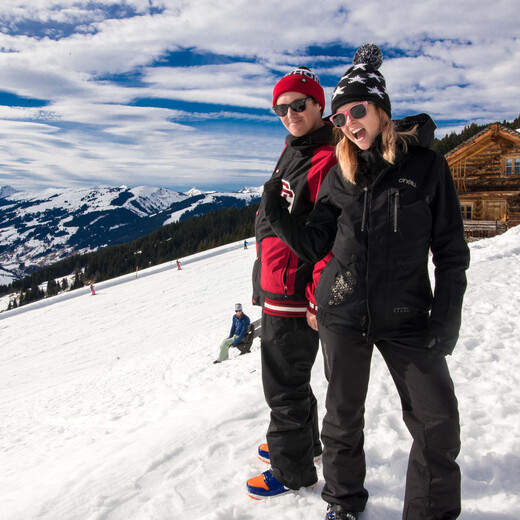 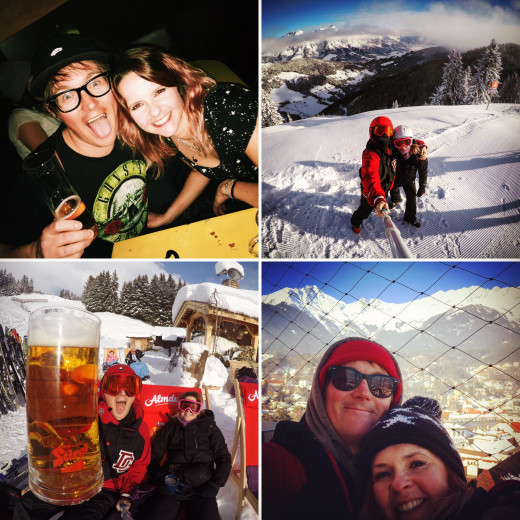 Ironman preparation
In addition to skiing, snowboarding and partying, Charlotte still makes sure she continues to exercise. The sporty musician has already competed in four Ironman competitions, and so she also uses Saalbach Hinterglemm to prepare for her next competitions. "I cycle at the ergometer and I love running on the cleared winter hiking trails. I use the pool of our apartment to swim. And who knows, maybe this year I’ll even compete in Ironman 70.3 on 27 August in Zell am See..."

"ryanplaysdrums" is Ryan’s twitter name, and he keeps busy twittering about his winter adventures in the Skicircus. His twitter name says it all – he started playing the drums at the age of 9 years. His first record deal took him straight away from college. Charlotte, too, was only 14 years old when she started playing the bass guitar. "I played smaller shows, then bigger ones. The musician’s life is really the only life I know!" And what would have become of them if music had not been such a big part of their lives? They both think about it for a long time and with a laugh, they reveal their "Plan B". Ryan says: "Freeride-Guide!", And Charlotte: "Snowboard instructor!" 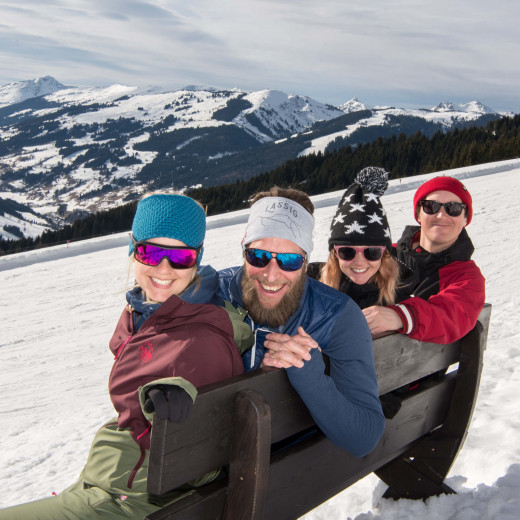 Enjoying the view with Dani and Sascha from Skicircus Stories 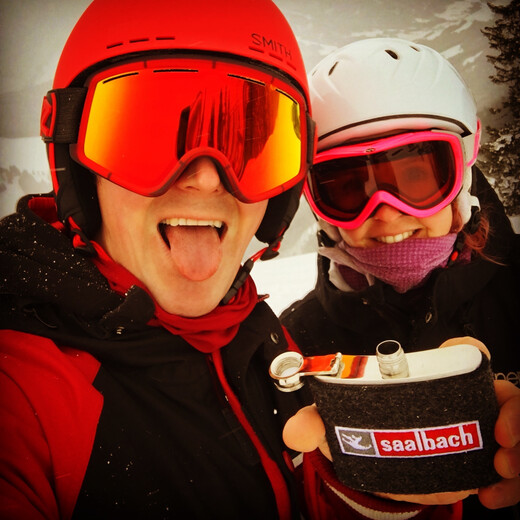 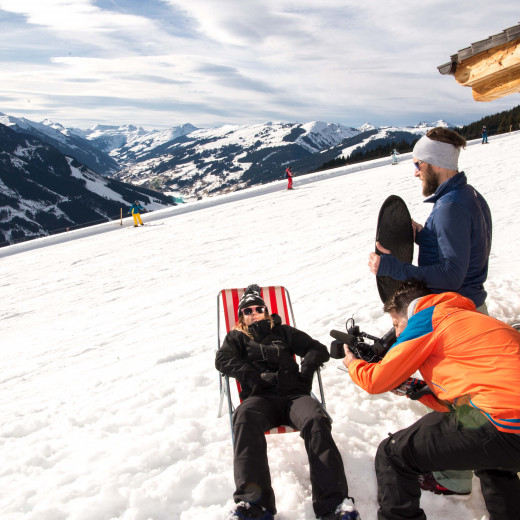 Return to Saalbach Hinterlemm
Their time-out is slowly but surely coming to an end, and Charlotte says with a hint of sadness, "I will miss being first to get to the lifts and then to have the perfect first run on the slopes." Ryan nods and adds, "I will miss my new friends, like the photographer Daniel Roos and Tina and our joint freeride tours. But we don’t want to think about it yet! And next winter we will certainly come back for a holiday. Maybe even in the summer – depending on how our musician life allows. I am already touring again from April 1 onwards and Charlotte will then works on a new album with her band.