Three family activities away from the slopes

Most people visiting Glemmtal during the winter only have one thing on their minds: skiing on the excellently developed network of slopes. However, there are many alternatives to fun on the slopes, especially for families, which can be just as much fun. So, those who would like to take a day off from skiing will most definitely not be bored in Saalbach Hinterglemm. Together with my children, I tried out three fun family activities and sent our three young testers Marie, Laura and Nico (7 years old) into the snow and onto the ice.

The ice rink in Hinterglemm is located toward the valley, on the edge of the town, right by the main road. During winter, ice skaters can take their turns here from 10 am until 10 pm. Our children were thrilled from the very beginning. After trying on the skates from the rental service, we move onto the slippery ice and slowly get comfortable. Tumbles are, of course, unavoidable, but even slips are a lot of fun when you wear thick ski suits while on the ice. The ice seals are especially popular among the kids. No, not the real ones from Antarctica, but the ones made of plastic. Children can hold onto them and make their first, careful steps on the ice. Or they can just sit on them and let their parents pull them around.

After about two hours, even the fittest kids are bound to get tired and hungry. That’s where the bistro located directly inside the sports centre in Hinterglemm comes in. A small snack, a hot tea and sooner than later the little ones have replenished their batteries. 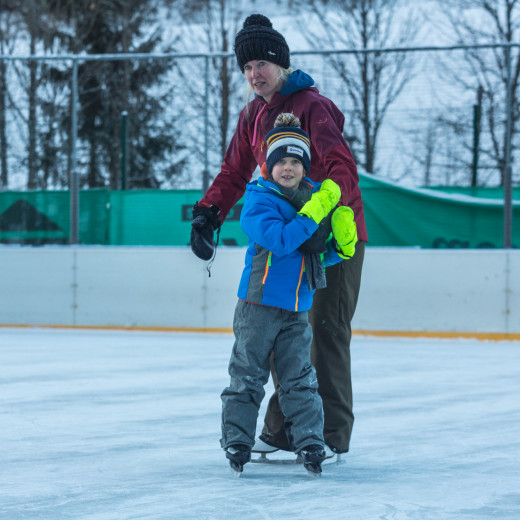 The first is the worst 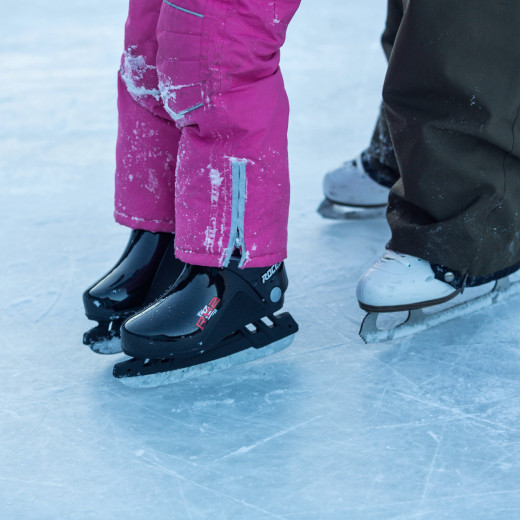 Skating-fun for the whole family 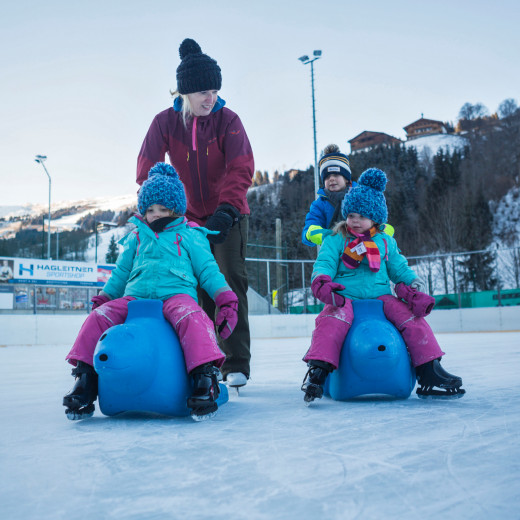 2. Tobogganing on the Spielberg Alm

Two prepared and illuminated sled tracks await us in Saalbach Hinterglemm. The first is marked by wide serpentines and stretches across 3.5 km from the Reiterkogel middle station directly to Hinterglemm, and the other starts directly at the legendary Spielberg House and leads right into the town of Saalbach. But it wasn’t a difficult decision to make for the kids: the prospect of a cosy break at the Spielberg House convinced them, even though the Reiterkogel sled track, with 400 metres of altitude difference, guarantees action and fun for old and young alike. And thus, we’re now on the parking space at the foot of the Spielberg House toboggan run. Those who are fit enough can walk the three kilometres to the Spielberg House by foot. But a much bigger adventure can be experienced when going uphill with the snowcat. With their own shuttle service, you can take a relaxed ride to your destination. But the alternative is definitely quicker and cosier, which Marie, Laura and Nico realise straight away as they jump into the snow vehicle’s transportation basket. The machine launches with a loud roar and gets us to the Spielberg House in no time.

After arriving at the top, we are received by a uniquely beautiful winter landscape. It has just started snowing and the toboggan run is perfectly groomed. Before we start, we pay a visit to the Spielberg House. A little advice: the Pinzgau Kasnocken (cheese dumplings) are a real insider tip. Four types of cheese are combined with dumplings into a culinary work of art by the local chefs. Strengthened, we head towards the valley. The rental toboggans are freshly polished and are already waiting for us in front of the hut, so we can get started right away. We take the first curves with a little precaution, but after a few minutes, our initial timidity dissolves and we ride toward Glemmtal with full speed. The track keeps getting flatter and then suddenly increases with steeper spots. In summary, the track is ideal for families and children, because it never gets too steep while going down. Having arrived at the bottom, we bring the toboggans to the collection point. The excitement on the kids’ faces proves that this was as much fun as it gets! 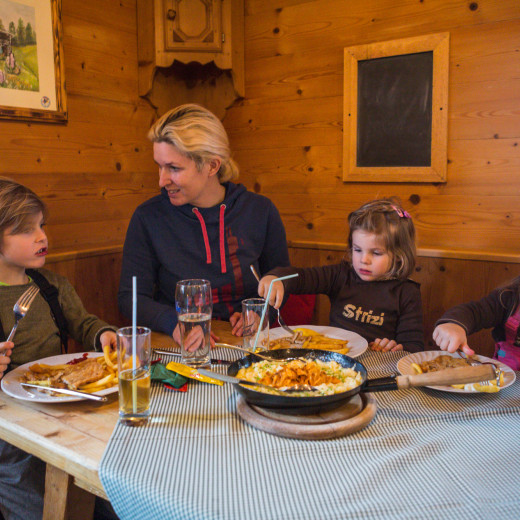 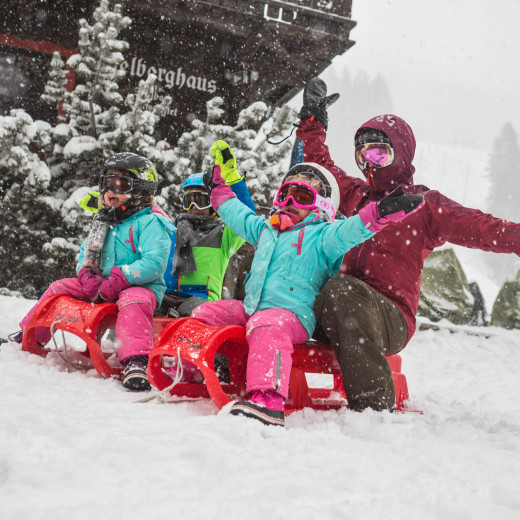 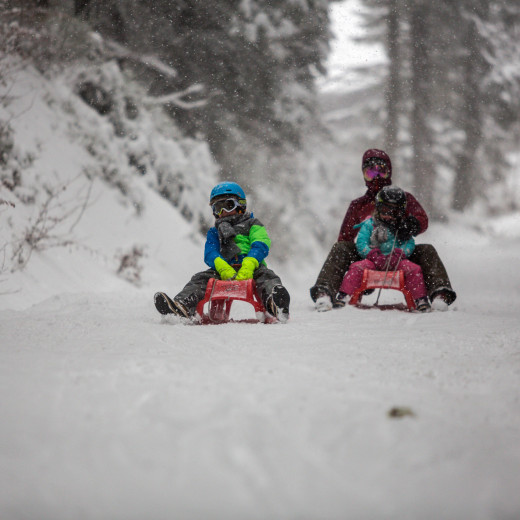 Toboggan fun for kids and parents.

After our toboggan expedition, we don’t waste a minute before getting back out onto the snow again to test our snow tubing skills. Snow tubing is a bit like sledding on a tyre – only with more action and speed. For this, there is a special track in Hinterglemm by the Unterschwarzachbahn. It is only 120 metres long, but one shouldn’t underestimate the speed that can be reached quite quickly here. With a valid lift ticket, the use of the snow tubing lift (from 4 pm till 9:30 pm) is completely free of charge. We walk up and start our first run. Nico is the first to hit the track and positions himself accordingly. With full speed, he races into the final curve and joyfully yells at the top of his lungs, “This is amazing, this is so much fun!” After arriving at the bottom, we hear a unanimous “One more time!” Fine then, let’s go back up again. The evening is still young, after all.

The valley head in Saalbach Hinterglemm