Creative get-together in the Home of Lässig

It looks a bit like a fun class trip. Armed with cameras and smartphones, a colourful mix of excited and highly motivated young people rushed into the Skicircus. Full of enthusiasm, they recounted their experiences and adventures on their social media accounts. An everyday occurrence? Not quite, because this happy bunch was made up of 15 influencers from various social networks who came together for Storybase 2018.

“It’s just amazing”, the participants proclaim as I meet them for some schnapps sampling near Bartl Enn in Hinterglemm. They’re full of energy and have already completed a handful of adventures in the Skicircus Saalbach Hinterglemm Leogang Fieberbrunn. They were also provided with two BMW xDrives, allowing them to pick and choose from the Skicircus’ programmes and offers as they pleased: Ski-Doo driving in the Snowmobile-City, lama trekking or guided freeriding in Fieberbrunn, guided ski tours on the Asitz mountain in Leogang, tandem paragliding, early morning rides with sunrise view, and so much more…

Who are the (micro) influencers and storytellers that were invited by the Skicircus to spend a week in the region and then report on it? The dictionary definition says that influencers are individuals who are highly respected by their followers as a result of their social media presence. In other words, they are internet multipliers whose authentic posts and messages reach the target group like word of mouth. These mostly under 30 years old influencers use YouTube, Facebook, Instagram and Twitter for their pictures, hashtags and comments. Incidentally, there is no “typical” influencer in Storybase 2018. There is, for example, Jure, the Slovenian travel blogger, who normally works as an online English tutor. Together with his wife Simona, he travels and is known as “Slovenians Travel”. The two have already been to 55 countries. The digital nomad, who carries out his work while travelling the world, does not see himself as an influencer. His 5000 Instagram followers, however, eagerly anticipate each one of his new posts. And as soon as he starts reporting on his first excursion into fresh powder snow, there is an avalanche of likes, shares and comments. 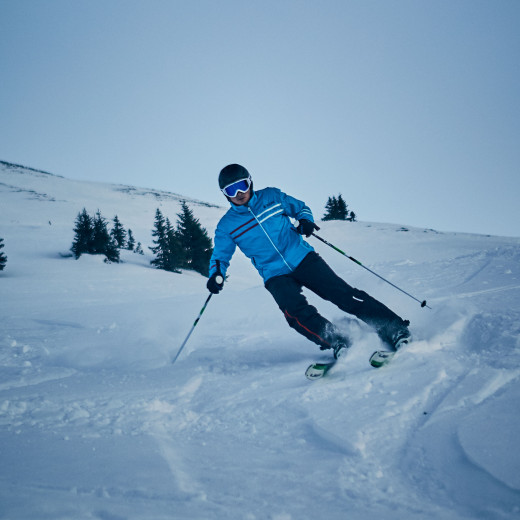 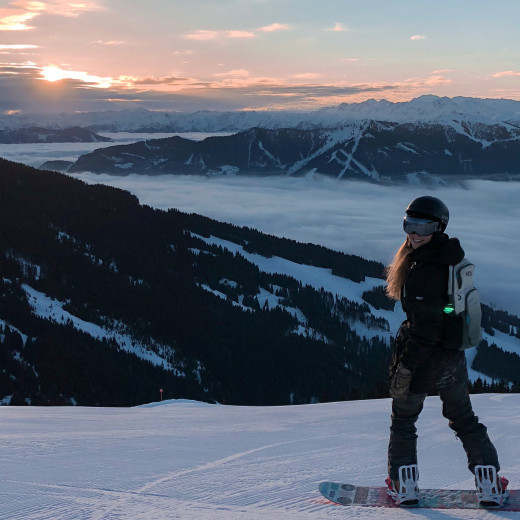 Lulu at her early bird ride 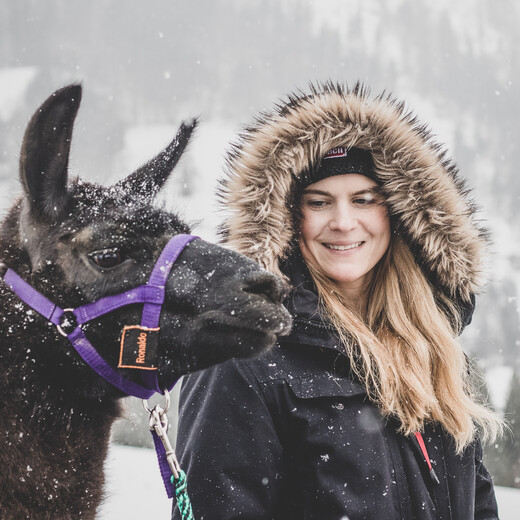 And then there is Silvio, the enthusiastic freerider from Gmunden, who spends every free minute of his time in the mountains of Salzburg. His first impression of the Home of Lässig: “The Skicircus is simply awesome for freeriding! But for me, there were also additional highlights, such as Ski-Doo driving or the ski technique training camp where I, as a freerider, was able to learn a whole lot.” Instagrammers and other photography fanatics are easy to spot as a result of their smartphones, which are always there and ready to capture the perfect moment in the form of photos, videos, live videos, or Instagram stories. The first question upon arrival usually has something to do with the Wi-Fi password. But what is one to do if there is no network coverage to stream all the fun? The videographer and photographer Michael from r-view-Productions laughs and says, “That doesn’t have to be a catastrophe! On the contrary — we all enjoy the occasional Wi-Fi detox. We didn’t have any reception during the welcome evening at the Rammern mountain pasture, for example. As a result, we had the chance to get to know one another a little better and have a nice chat. But even when it comes to the dinners and the subsequent relaxing in the chalets, our rule is simple: no smartphones!” 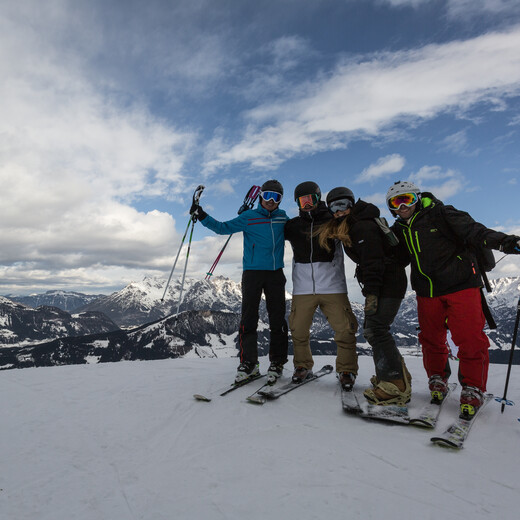 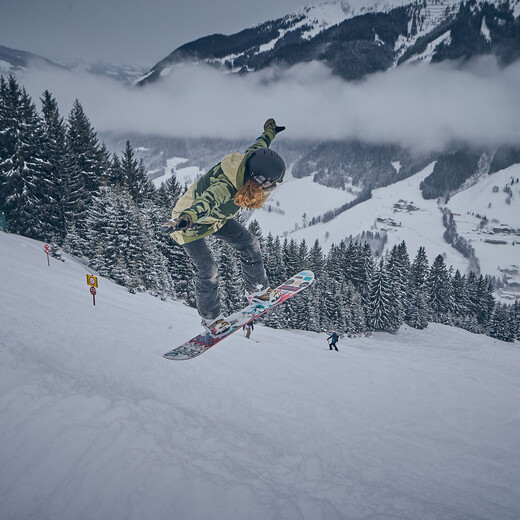 Lulu takes off in deep powder. 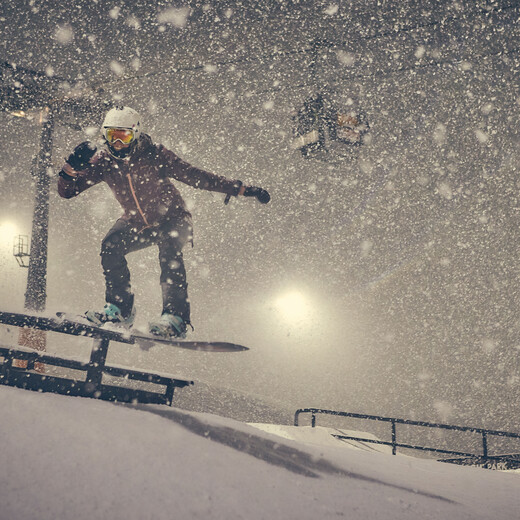 Several of the participants, such as Michael from Carinthia, don’t consider themselves influencers at all, making Storybase an entirely new experience and huge adventure for them. As a passionate skier, photographer, drone operator and videographer, Storybase offered Michael countless opportunities to get the perfect shot. “I joined the freeriders with my full filming equipment. But tandem paragliding was also enormous fun. I know the bird’s-eye view from my drone work, but this was the first time that I was up in the air myself. One of my best pictures, however, came to be on the mountain at sunrise when I captured the milky way together with the moon and the Glemmtal valley.

Jean-Paul is a veteran in the influencer business. The photographer from the Netherlands with 22,000 Instagram followers has accepted many invitations from tourist destinations, but Storybase 2018 marks his first trip to Austria. “Back in the day, it was journalists who travelled the world for the travel sections of big newspapers. Today, reading about travel mostly takes place online — and that is where we as “influencers” come in. I have been travelling as an Instagram photographer for five years now with the aim of capturing the most beautiful corners of this world”, says the Dutchman with French roots, who earns his daily bread from working in an office in the tulip export business. Jean-Paul was especially intrigued by the opportunity to be on the summit at sunrise to capture the first sunrays with his camera. “Those early bird moments were an absolute highlight for me. But so was the exchange with other influencers — such a fun, diverse group which, nevertheless, came together in perfect harmony.” 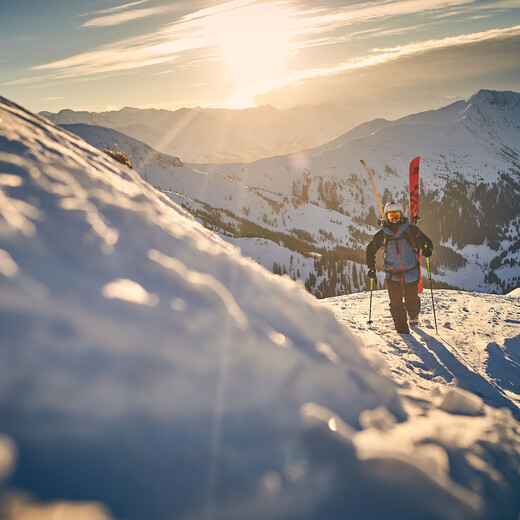 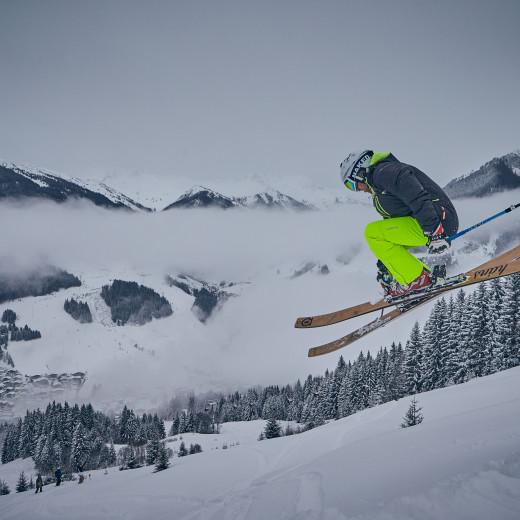 Michi in front instead of behind the cam. 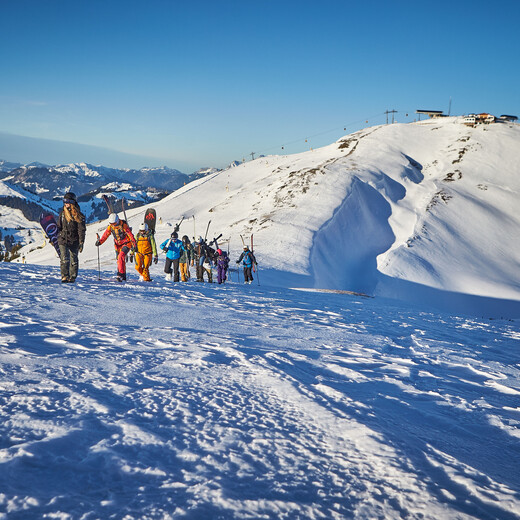 The storybase crew were stoked by the sunset hike

“Both! As a blogger, you’ve always got your camera on you during important activities,” says Lulu from Germany, whose actual name is Luisa and who is both a student as well as a fitness coach. Following Storybase, the 23-year-old writes on her Instagram account: “I’m looking back on an incredible week. Although I have visited many ski resorts in the Alps, not one of them even gets close to the Skicircus Saalbach Hinterglemm Leogang Fieberbrunn! As a skiing area, it’s got everything: powder snow runs, amazing food and bars, floodlit parks for action during day and night. I cruised around via splitboard, went freeriding, paragliding, I hiked with lamas, sampled schnapps and did so much more.”

The 15 influencers’ euphoria can still be felt days after their departure on their social media channels, creating positive vibes for the Skicircus. With a community of 500,000 followers on Facebook, Instagram, Twitter and YouTube in total, the region is one of the strongest destinations in the Alpine area when it comes to social media. 2018 marked the third run of the innovative Storybase project. With takeovers of the SalzburgerLand and Visit Austria channels, the influencers ensured strong reach. Now, following their return home, many additional stories will be written and then published on their blogs. Paul Kubalek, Digital Media Manager of Saalbach Hinterglemm’s tourism board, organised and supervised the Storybase project. He says, “For years, we have been increasing our focus on digital marketing. In doing so, one cannot avoid the subject of influencers and micro influencers. 2018 was another year in which we were able to bring together a brilliant mix of authentic individuals. Incidentally, it’s not all about the raw number of followers. Creativity and fun content are crucial. A small but relevant and organically grown community can be very valuable. These creative individuals from across Europe generated some really authentic content about the region.” A new edition of Storybase is planned for June 2018 as well as January 2019 — influencers who are interested in participating can apply at socials@saalbach.com.

Story Base 2017: Behind the Scenes