Peter Kaiser about the GlemmRide

Interview with an austrian bike pro

There are only five weeks until the GlemmRide Bike Festival, and we can hardly wait. We have tracked down affable bike pro Peter Kaiser for a chat and to ask him some questions. During the interview, he informs us what it is like to live as a “Kaiser”, why one bike is just not enough and which tricks he would like to demonstrate at the GlemmRide Slopestyle this year.

Hello Peter. You know all about the gravity mountain bike scene. Could you introduce yourself to our Saalbach community?
Hi! My name is Peter Kaiser, and I am 21 years old. I grew up in Reutte, Tyrol, but for the last two years, I have been living in Innsbruck. (Interviewer: Thank you for that detailed answer, Peter. That is so typical of our Peter, he is very modest. Let me explain further, Peter is one of the best dirt jumpers in Austria! He participates at various Freeride Mountain Bike World Tour contests and has been training and fine-tuning his tricks over the last few years. Besides that, he can be seen demonstrating massive whips at Whip-Off-Contests. Note: Whips = trying to get the bike as high up in the air as possible and getting it sidewards.)

How is a typical day in the life of a Kaiser?
There are two variations of a day in my life. The weekend and weekdays. A classic day in Innsbruck starts early in the morning with a bowl of muesli and checking emails. From then on it’s all about biking, from Enduro to riding the local trails, downhill biking, shredding in the bike park to sunset sessions at the new dirt-spot. In between, I have my creative phase and dabble in filmmaking and photography and am often editing my videos until late in the night. To round off the day, I spend some time at the lake and enjoy a Burrito at the Machete restaurant. On weekdays things run a little differently; I am mostly editing in the office until late afternoon (Interviewer: Peter works at the Distillery, nothing alcohol-related, but the name of a media agency with its focus on sport and the outdoors.) I am often out on media shoots and try to fit some biking in the evenings. 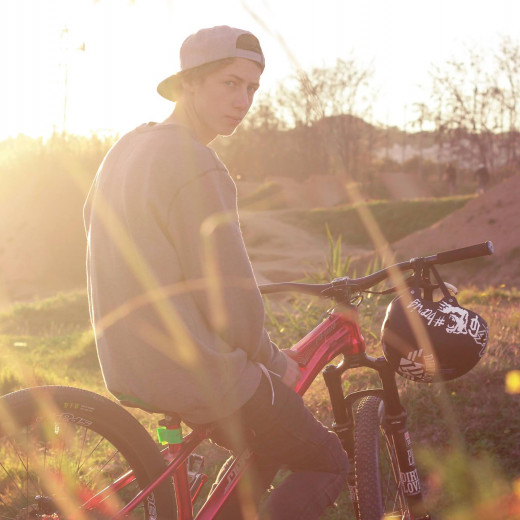 Peter Kaiser at the dirt park 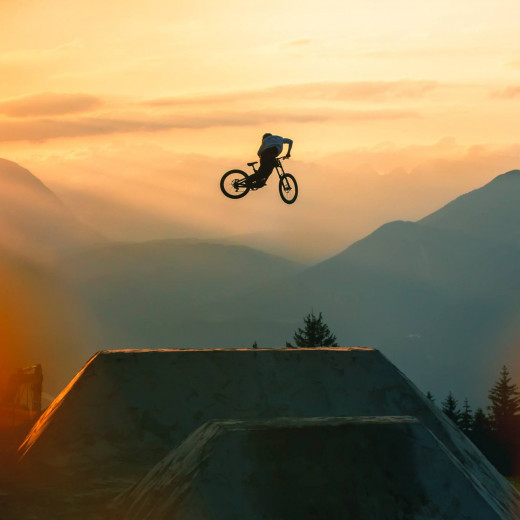 Peter at the Whip Offs in Innsbruck. That's how Whips should look like! 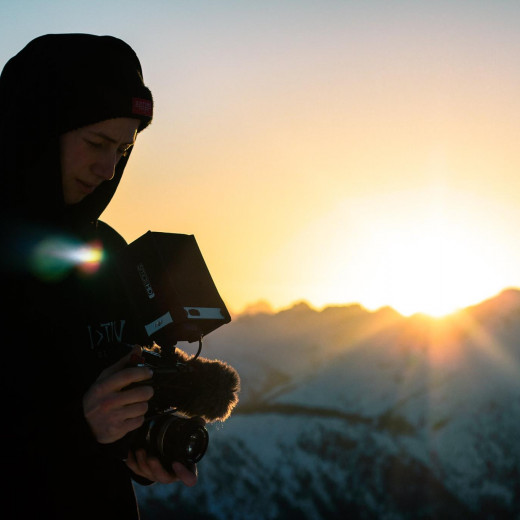 Where do you prefer to ride? How many bikes do you have in your cellar?
I loved riding around at home in Reutte, but that is history now since that dirt park no longer exists. Until recently there was no dirt park in Innsbruck, but over the last few months, they have been building some new jumps. Once this is completed, that will for sure become one of my favourite spots! In my garage in Innsbruck there are seven bikes of which I use all, one for every purpose: A dirt bike, a slopestyle bike, a downhill bike, two Enduros, a BMX, a city cruiser and even a bike that I used for the water jump at the “Lake of Charity” event in Saalbach.

How did you get into biking?
It all started at a place in the garden of one of my best friends in Reutte. I always loved being outdoors in the woods. At some point I started digging my own jumps – that is when I learnt all the tricks that I now show at the events I participate in.

Is it a sport for everyone? Have you got a couple of tips for mountain bike novices?
For sure! Just get out and about and do lots of biking. Enjoy yourself with friends, and the rest will come naturally. In the beginning, it is crucial to develop a feel for the bike. Therefore pump tracks are ideal – you will learn the basics which are essential for jumping at a later stage.

You’ve participated in the GlemmRide Bike Festival since the very start and have often stated in interviews that it is your absolute favourite event. What makes the event so special for you?

Yep, I have loved GlemmRide from the very first time the event took place! A slopestyle course on such a large scale is seldom seen in these parts and not always included at bike events. Therefore, GlemmRide is quite unique! It is not every day you get the chance to jump over hotel pools and terraces! Aside from the Slopestyle contest, the rest of the event is really cool, everybody is really friendly and the parties’ rock! (Interviewer: Words from a real party pro.) Nothing beats a hangover better than a ride on the Hacklberg trail the day after the Slopestyle Contest, taking in a stop to enjoy a plate of Austrian style snacks with your buddies!

Last year, despite a severe injury at the beginning of the year you participated in the Slopestyle contest. What happened? How did you manage the contest?
(Interviewer: For all those that have never been on a bike, but are planning to do so or are of nervous temperament should skip this question. We don’t want to scare you off!)
Yes, there was an accident… Last year I was training in the indoor skate park in Innsbruck where I fell and tore my “Arteria Iliaca” – the pelvic artery. Everything moved pretty quickly: Ambulance, five operations, doubts about my leg, a lot of physio and a lot to think about. It was a close call, but I was lucky that I recovered relatively quickly and was able to get back on the bike again after three months. Crankworx Innsbruck was my first event after the injury. I decided I would participate in the rest of the season’s events for myself, to soak up the contest atmosphere and see my buddies again! I realized just how much fun these contests courses can be if you don’t put too much pressure on yourself. This was important for me both physically and mentally, although the incident will always be at the back of my mind.

In recent years the GlemmRide Slopestyle event has attracted stars such as Brett Rheeder, Thomas Genon and Nicholi Rogatkin. How does it feel to compete against international “big names” of the biking scene? Do you see them as your role models or buddies?

Buddies! I already know most of them really well, and we are always pushing each other! This was one of the main reasons that I was so motivated by such events at the beginning. You see friends from all over gather together on their bikes! 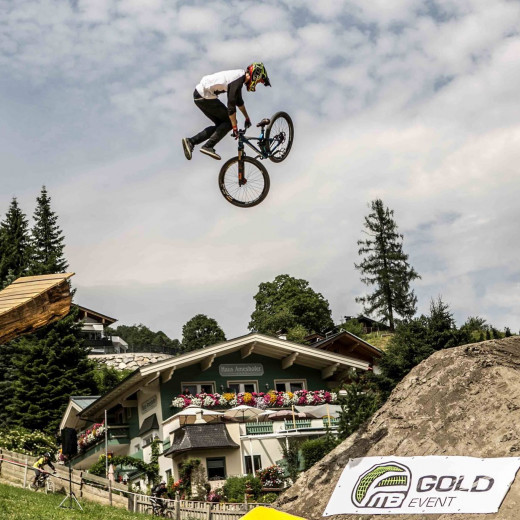 In action at the GlemmRide Slopestyle 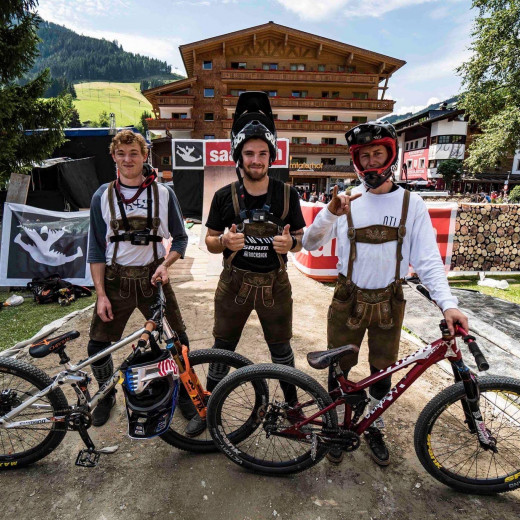 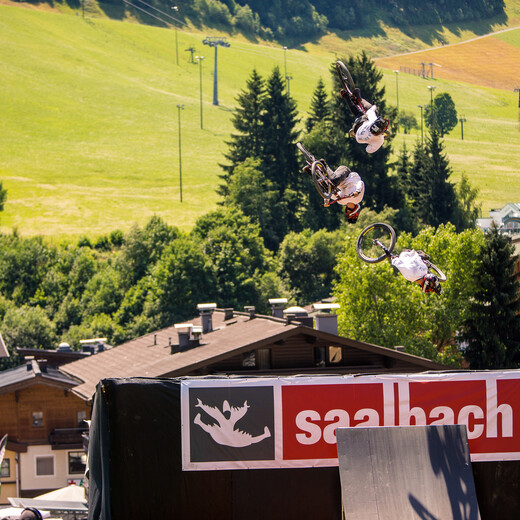 Just one out of a lot tricks, which Peter will show at the Contest

What will you be looking to demonstrate on the course this year? Which moves are hidden in your bag of tricks? Are you practising one particular skill that you would like to demonstrate at the GlemmRide Slopestyle?

I haven’t decided yet – I am merely looking forward to returning to the course and will be happy to complete a clean run! I’ve been really getting into Cork7 lately (Interviewer: a trick that revolves 720 degrees around its own axis. On a bike! Unbelievable right?) Combos (Interviewer: meaning he combines this trick with others. Crazy!) Maybe there will be something cool and new at GlemmRide for me!

How comfortable do you feel on the GlemmRide Course?
The GlemmRide course is extraordinary. The first rounds take a bit of getting used to, but once you have ridden the course a couple of times, its great fun! As I have already mentioned, it is not every day that I get to ride over hotel pools, terrace and rivers, that’s something really unique!

Will you also participate in other side events?
I will make a spontaneous decision at the time, but primarily I am focusing on the Slopestyle contest and on having a cool time with everyone in Saalbach! (Interviewer: Peter is also excited about having a few drinks. Beer is on the list, but his favourite drink is gin. Anyone wanting to aggravate him should buy him a Tequila – he doesn’t like that at all).

And last but not least: What else would you like to share with our community?
Keep it up! I find it really cool what you are doing in Saalbach. It’s awesome how everyone cooperates in your community! Good vibes! (Interviewer: Thank you for the flowers).

Editor’s note about the interviewer: Our Karin is herself an avid biker and well-known on the bike scene and knows Peter Kaiser personally. This interview is therefore from a reliable source and was conducted with a broad grin and knowing wink.