6 summits, 3008 metres in altitude difference and a distance of 24 kilometres.

It is one of the hardest ski touring races in the alps and it celebrates it’s 22nd annivercary on 17th of January 2020. In an interview, event organiser Roland Kurz tells “Saalbach Stories” about the origins of this now legendary ski mountaineering race, reveals tips for Mountain Attack newbies and explains why it’s so difficult to beat the record time.

With its 3008 metres of altitude difference, the race is considered among the toughest ski mountaineering races. How did you get the idea to get this event off the ground?

Back in the day, I was responsible for product marketing for worldwide alpine skiing at Atomic. My job also frequently brought me to Italy, where ski mountaineering was already quite popular in the ‘90s. In 1996, I founded the event and sports agency NMC. The idea for the race had been floating around in my head for a while and since I had previously worked in Hinterglemm at Snow & Fun as the Head Ski Teacher for eight seasons, the Skicircus was the logical place to set up the race. Only there could I achieve the special atmosphere that you get when the athletes pass through the town centre four times while being cheered on by the audience. In the summer of 1998, I contacted the mountain lift companies and immediately received a very positive reaction. After intensive preparations, I launched the first race in January 1999. 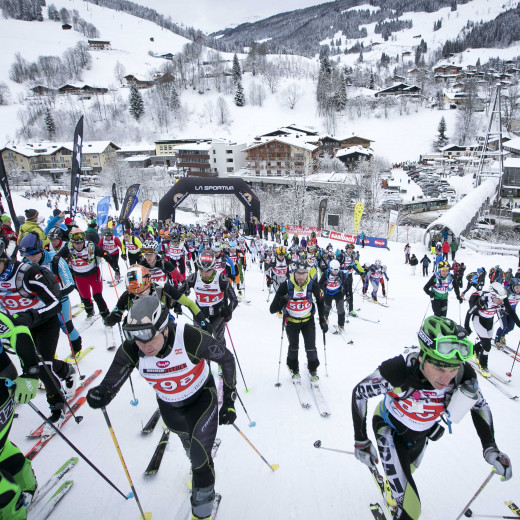 How did you determine the route and how did the premiere of the Mountain Attack play out?

I walked the route countless of times by foot and that is how I determined the positions for the lights as well as the stations. It was clear from the very beginning that the race should have a highly athletic character and that it was meant for real endurance athletes. The mountain lift companies were initially concerned that there wouldn’t be enough participants at first due to the demanding route with 3008 metres of altitude difference. So I promised that we would have at least 100 participants, and when only 85 had been registered a week before the race, I motivated my entire circle of friends to join the Mountain Attack. But then the registration suddenly exploded during the course of the final week before the race and we ultimately ended up with 333 athletes on the starting line. This challenged our team a lot since we had three times the number of expected participants, so we quickly filled up the supply stations with bananas and chocolate just before launch. I made a bet with the mountain lift companies just before the beginning of the race that the first marathon runners would make it to the finish line in under four hours. Nobody believed me, because this route takes around four hours even when you’re skiing. But the Italian Omar Operandi helped me win my bet with his victory time of 3 hours and 5 minutes. 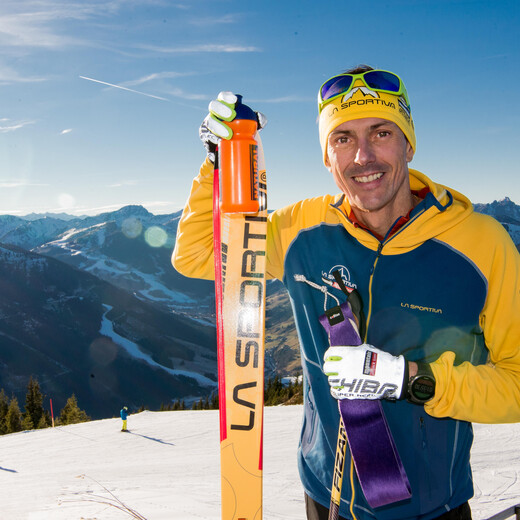 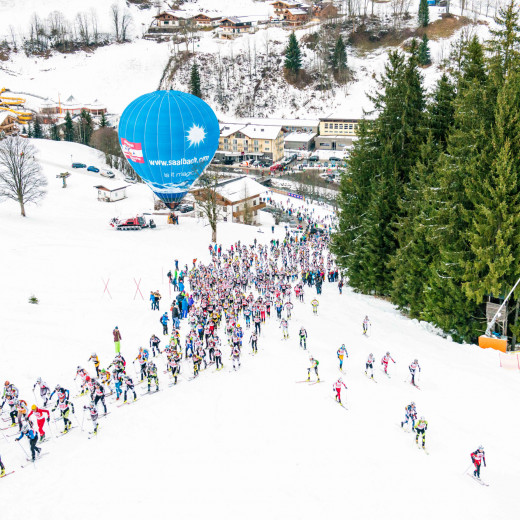 The starters on the first ascent to Schattberg. 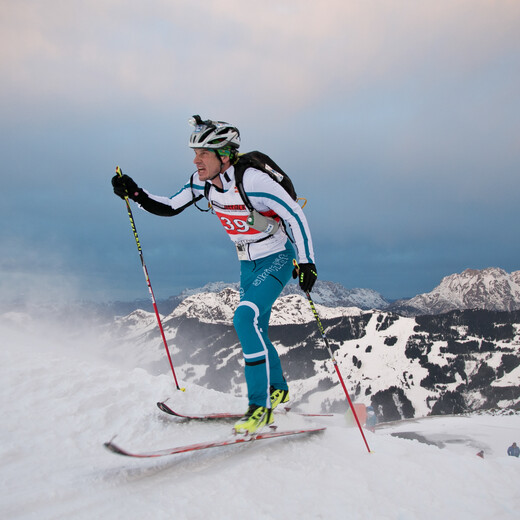 The absolute route record is 2.24 hours and was set by the Italian Tadei Pivk in 2015. Could this time perhaps be surpassed with the new and lighter equipment?

The equipment has, of course, improved significantly over the course of the last 19 years, but there are additional crucial factors for ski mountaineering next to equipment and training conditions. Someone could only beat the record in truly perfect weather and snow conditions. Temperature, amount of snow and wind make a huge difference for the participants. Strong headlights, light skis and boots, perfectly applied furs, however, make a great basis for extraordinary performances. You have to consider that the runners are on their way in the dark and often with speeds of 100 km/h. 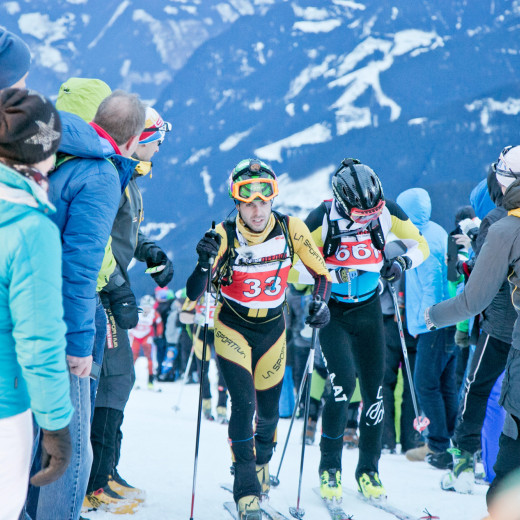 The crowd welcomes the starters at Schattberg. 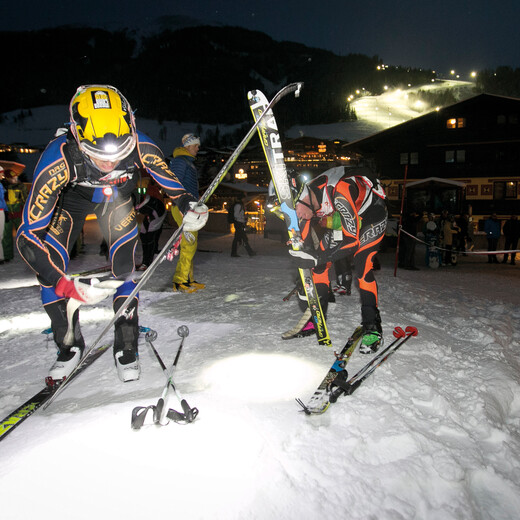 The competitors have to apply the skins for the next ascent. 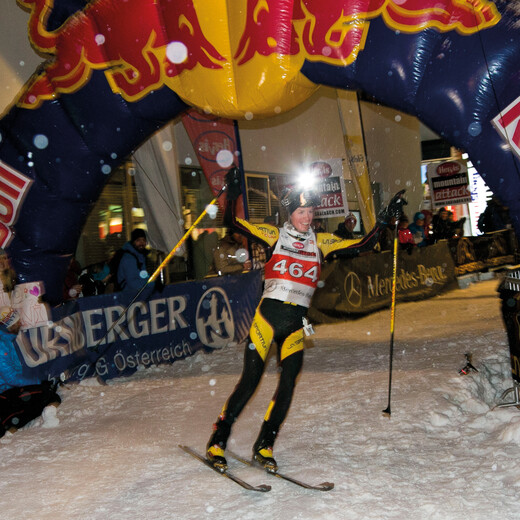 The competitors finish the race in the city center of Saalbach.

You now manage your own ski tour team and you’re also participating in legendary races like the Sellaronda. What kind of advice do you have for a Mountain Attack newbie before his or her first race?

With the climb to the Schattberg, the race is really difficult – and there is no warm-up phase either. So you absolutely have to start slowly and not be rushed by the masses. You have to find your rhythm and maintain it well. And always make sure you’re drinking enough – even when you don’t feel thirsty! That is super important, because you lose a lot of fluids here. If you do the marathon, you also absolutely have to eat something at the supply station, otherwise you will be defeated by your own hunger. One advice for the descent: keep an upright posture and take wide curves, or slide sideways – that gives your muscles relief and you save strength for the next climb. You should also have some replacement fur with you, because fur that doesn’t stick can end your race in a really bad way. The quick removal of the fur on the summit must be trained properly, because that’s where you can gain a lot of time. You have to find your own system regarding how to remove the fur – without having to take off your skis – and then change the setting back to descent mode.

The Mountain Attack is also the perfect race for onlookers who like to come directly to the race track to cheer the athletes on.

That’s another thing that makes the Mountain Attack rather unique. The mountain lift companies have granted the onlookers free rides up to the Schattberg after the launch of the race at the village square. In the middle and mountain stations, the participants can be cheered and encouraged. The checkpoint in Hinterglemm, where mountaineering tour and marathon split, is also an ideal spot for onlookers. And in the Zwölfertreff at the Zwölferkogel, you can enjoy a beverage while waiting in a warm spot until the first marathon runners make it up the summit. The mountain lifts are also free of charge for the ride up to the summit. The valley crossing with the Hochalmbahn is also spectacular. Here you can see the runners going down the steep slope of the Zwölfer-Nord descent at very high speeds, before they put on the furs once more at the Hochalm valley station for the final climb. One advice for all of those who won’t make it directly to the track: between 15:40 and 19:30 there will be a LIVE STREAM on www.mountain-attack.at.