The final ride of the Kohlmais Group Lift

For the past three decades, the bright red gondolas of the Kohlmais Group Lift have not only been a frequent motif for photography enthusiasts but also the visual trademark of Saalbach Hinterglemm itself. Easter Monday 2018 marked the last time that the lift — originally built in 1989 — transported skiing and winter sports fanatics to Saalbach’s most prominent mountain. Saalbach Stories was there to capture the nostalgic moment.

“Many locals are going to join us for a last ride with the Group Lift today. Whenever I remember the fact that by this time tomorrow everything is going to be torn down, I get goose bumps,” the lady behind the counter in the Kohlmais Lift’s valley station tells me with a hint of melancholy in her voice. But this comes as no surprise, for the Kohlmais Lift is not just any ordinary lift. It has shaped the identity of Saalbach for 30 years. Not everyone loved them, but the fiery red gondolas, which moved back and forth between the Kohlmais Summit and the town centre in four groups of five, were among the Skicircus’ most iconic representatives.

A last selfie with the Group Lift

For my own final and nostalgic journey with the lift, I meet Wilfried Höller, the former director of operations of the Saalbach Mountain Railway Company, the former manager Rudi Möschl and also Wilfried‘s wife Liesbeth is joining us. We’re at the valley station, where the excavators and bulldozers are already waiting in line and the large excavation pit signals that it is indeed time for a new beginning. The year 1987 was another such beginning, when the planning of the first gondola lift to the Kohlmais mountain began. Wilfried Höller remembers the time well: “We were already preparing for the Alpine Ski World Championship of 1991 and wanted to be ready for the onslaught of athletes and visitors. Nevertheless, we also wanted something that was economically feasible and this special lift by the company Doppelmayr not only promised lower construction costs but also energy-saving operations. The Kohlmais Lift would also require less staff than other lifts. These days, however, group lifts are out of date and have to make way for more efficient means of transportation.” Whilst the other locals are still taking quick selfies with the red cabins, we climb into one of the group’s last gondolas and Wilfried Höller laughs, “In its first winter, the lift was only allowed to go 5 metres per second, since it was an entirely new design.” Slowly, we glide from Saalbach’s town centre up to the Kohlmais mountain and from time to time, we see another group of gondolas heading down to the valley. “Due to the individual groups, the middle station had to be built in the exact middle — that was the only way to make sure that all four pairs of five could pick up and offload passengers simultaneously,” explains the former manager Rudi Möschl. 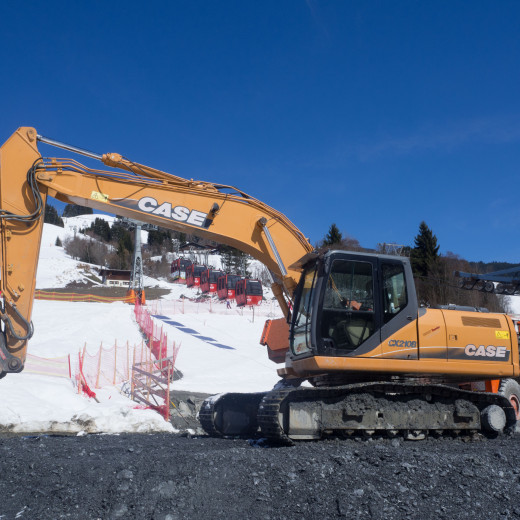 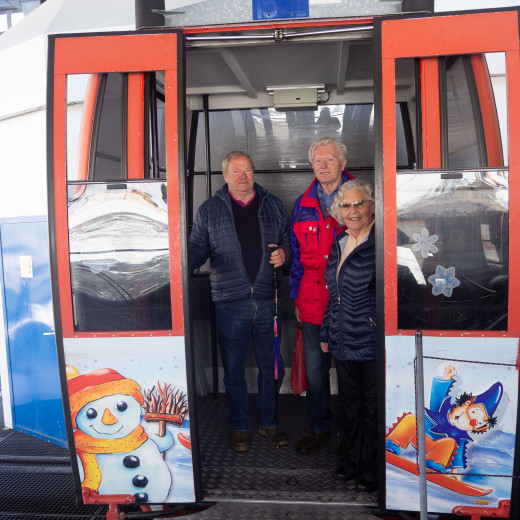 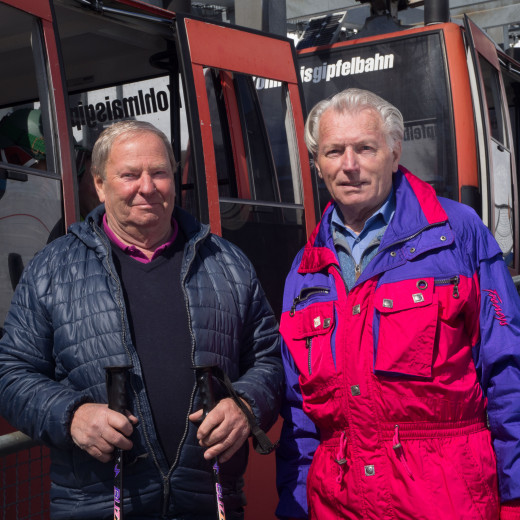 They share a lot of memories with the old Kohlmaisbahn: Rudi Möschl and Wilfried Höller

As we approach the new middle station, Höller starts talking about the new construction project: “A state-of-the-art 10-person monocable lift will start bringing guests to the Kohlmais mountain quickly and comfortably from the upcoming winter season onwards. In the next couple of days, the old gondolas will be removed and the cableway deconstructed. The valley station will be torn down and in its place, a new building with 100 underground parking spaces and employee apartments will be built instead. Guests can make their way to the ticketing area straight from the ski lift road and use the lifts to comfortably move up to the entrance. During the construction phase in the summer, the Schönleiten Lift will cover for the Kohlmais Lift. The Montelino children’s adventure trail will also offer only limited availability this year. But I think that our summer guests will be able to forgive us for the construction works this year, especially because they will result in a quicker and more efficient lift with an even more comfortable design which will start operations in December.”

As we make our final couple of metres to the summit, there’s one more thing I want to know: “What is going to happen to the Kohlmais Group Lift’s fiery red gondolas?” “Those have been sold,” Wilfried Höller reveals while laughing mischievously and embracing his wife, “I reserved one for myself, of course, which I will be using as a garden shed behind our house. My personal souvenir from Saalbach’s visual trademark!” The lift staff also appears a little melancholic, and exchanges to the tune of “It was a pretty one! But now it’s time for something new!” can be heard here and there. As Wilfried Höller opts for one last round together with his wife, I say goodbye and take a last glance at the gondola groups before I jump on my skis and wave as I make my way down the slopes: “Goodbye, Kohlmais Lift”.