Autumn fun on the summit

The end of the hiking season is just around the corner. Winter sports fans have already started polishing the edges of their skis and are eagerly waiting for the starting signal. Many have finished cleaning their hiking boots and stored them safely in their shoe cabinets for next spring. Here at “Best Mountain Artists”, we aren’t finished with the summer season quite yet and are still enjoying the last handful of snow-free hikes of the year.

For us at Best Mountain Artists, hiking during autumn is always a real highlight. As soon as the foliage begins to turn golden and the cattle are moved for the winter from the mountain pastures to their new shelter, a very special time begins in the mountains. The days start to become shorter and a sense of tranquillity returns to the mountains. In autumn, when the Steinberge mountains start to turn white from the first snowfall, then the grass mountains around the “Home of Lässig” become one of our favourite destinations. This summer season, we discovered the joys of “e-bike and hike” for ourselves, which, as the name suggests, is a combination between electrically assisted pedalling with the bike and hiking. The point of the motorised support is not necessarily to make it easier for ourselves, but to reach the starting points of the hikes much quicker. With the help of the bike, the range of the hikes can thus be increased significantly. What we like in particular is that this also reduces the rather unspectacular forest paths along the hiking routes, making the long outward and return trips to and from the actual tour a thing of the past. Especially in autumn, when most cableways have already paused operations and the sun can’t be spotted in the sky all too often anymore, it is nice to be able to comfortably reach the hiking starting point via the e-bike. 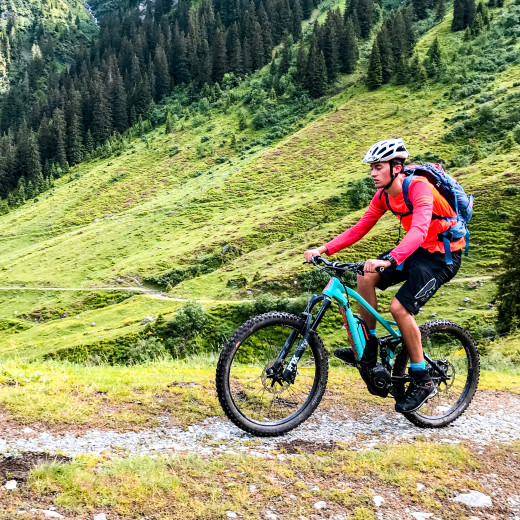 With the e-bike to Ossmannalm 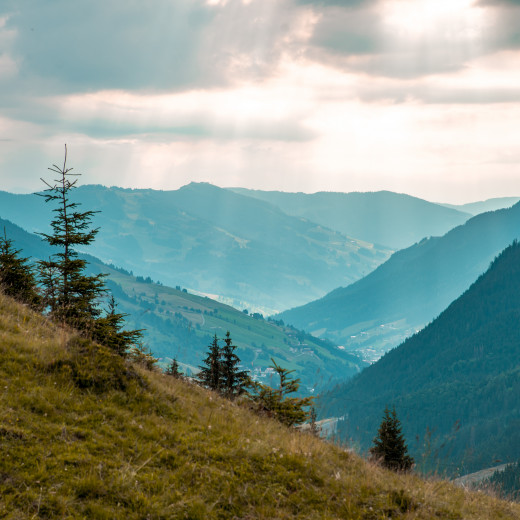 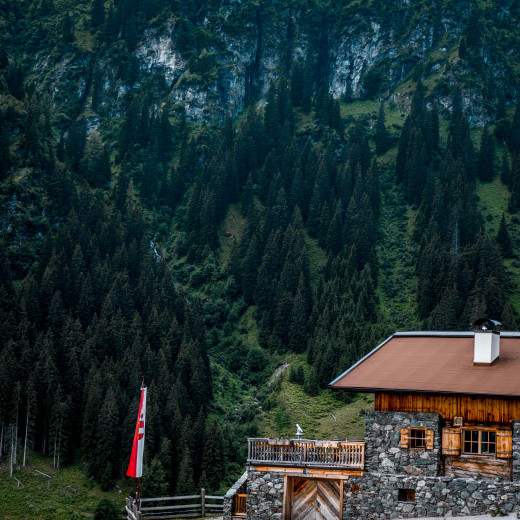 There are several tours around Saalbach Hinterglemm that are perfect for “e-bike and hike”. One of them is the hike onto the Staffkogel mountain in the Glemmtal valley’s valley head. We start the tour at the hiking parking space in Lengau. Here where the little noddy train takes hikers to the Lindlingalm during the season, it’s gotten much quieter these days. Nevertheless, a few locals and some holiday visitors can still be spotted and have, just like us, planned to spend a beautiful autumn day in the valley head. On our way to the Lindlingalm mountain hut, we’re already beginning to notice the benefits of the e-bikes. Having arrived there, we take a right and follow the forest path up to Ossmannalm. This is where we really start to notice that the e-bike’s engine isn’t doing all the work by itself. Some stamina, as well as experience on the bike, will be a strong advantage here. Those who don’t bring along their own e-bike can easily rent one for the day from one of the cycling specialists in Saalbach Hinterglemm. At the Ossmannalm, we have reached the end of the forest path and park our motorised bikes for a while. For now, our journey continues on foot. 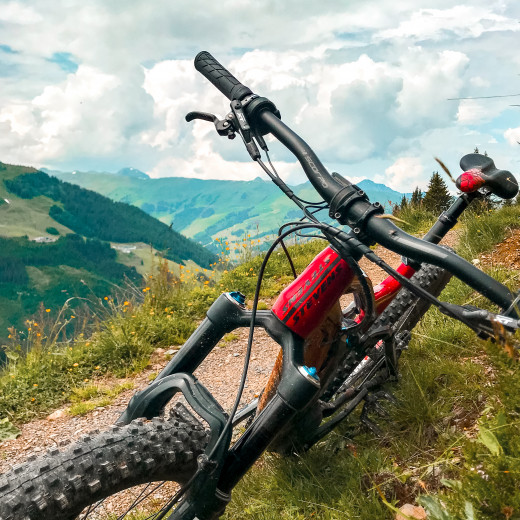 From here on we walk 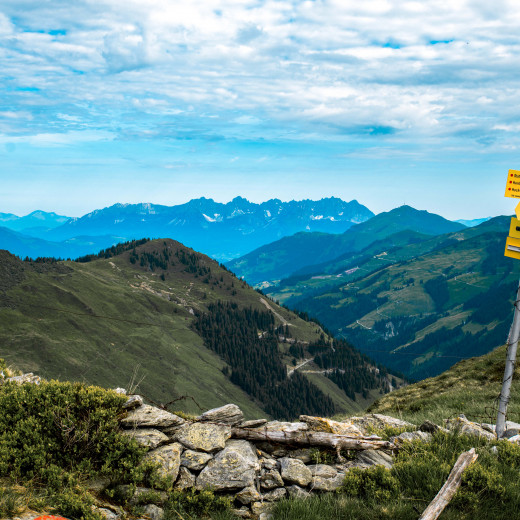 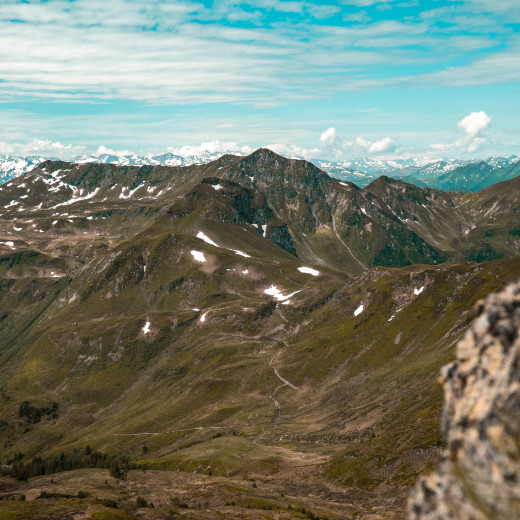 The valley end and Hohe Tauern

Up the Staffkogel mountain on foot

From Ossmannalm there are two options for the ascent. We choose the climb on the right, the slightly steeper path, and the hike back via the path on the left. Both paths lead across autumn-coloured mountain pastures to the Oberreiter Joch col. This ridge between the Saalkogel and the Staffkogel mountains makes for a brilliant panorama destination in and of itself. From here, you can already see the snow-covered summits of the Hohe Tauern mountain range in the south. The view north is dominated by the Steinberge mountains all the way west to the Wilder Kaiser range. From the col, it is only around 120 metres of elevation to the summit. The grassy flank of the Staffkogel mountain is still wet from the slowly dissolving snow from a few days ago, thus requiring our full attention. 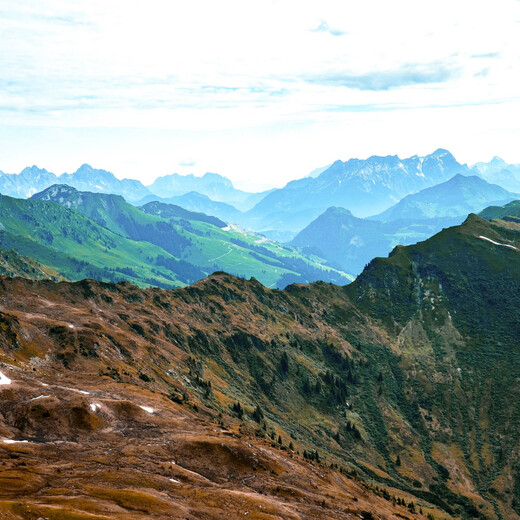 View from the peak 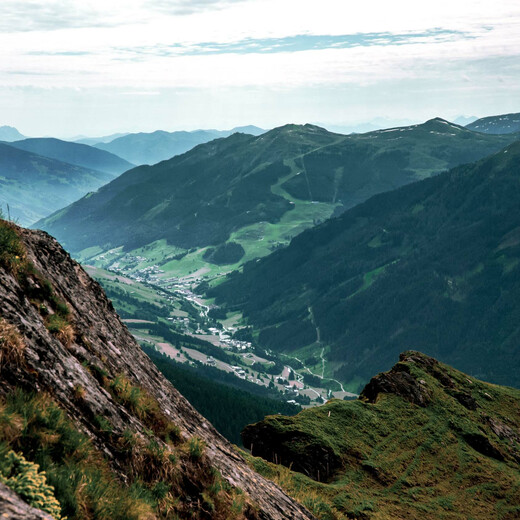 View into the valley 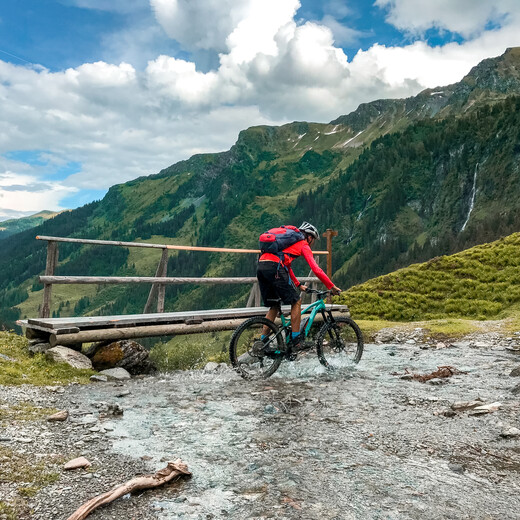 Back to the valley

Exhilarating summits with views of the Glemmtal valley

After roughly half an hour we’ve made it and are rewarded with the breathtaking view from on top of the Staffkogel mountain. As expected, we’re all alone on the summit and can fully take in the idyllic autumn atmosphere up here. Although the sun manages to make its way through the clouds time and time again, the temperatures make it more than clear that the winter is on its way. That is when the Staffkogel mountain belongs to the ski touring enthusiasts again. Ski mountaineers view the Staffkogel mountain as a true classic and within just a few weeks, they will likely start drawing their lines into the deep snow. There is probably no better place for a cosy snack break then under the Staffkogel mountain’s summit cross. And so, we enjoy our sandwiches as we take in the view of the Glemmtal valley. A little frozen, but overwhelmed with the beautiful sights and impressions, we begin our hike back to the Ossmannalm mountain pasture. Pamela, the landlady, has extended the season due to the beautiful autumn weather and is still going to be on the mountain pasture until 2nd November. Getting back to the valley is child’s play with our bikes and it doesn’t take us more than a quarter-hour. Satisfied, we look back on the Staffkogel mountain’s imposing summit, knowing one thing for certain: “Our next descent is surely going to be on skis.”