An early hike to the Saalkogel

The winter is over, and spring is bursting with colour. At the end of the valley in Saalbach Hinterglemm (Talschluss), with the last remains of snow, there are a couple of tours which will make a hiker’s heart skip a beat. One of the tours is a hike to the Saalkogel. Covering a distance of 14 km, this circular hike can be comfortably completed within three to four hours.

The grass mountains at the end of the valley offer ideal terrain for a sunrise hike. Especially loved by the locals is the hike to the Tristkogel where one can enjoy the first rays of morning sunlight. Although the flank of the Tristkogel is still partially covered in snow during the spring, the neighbouring Saalkogel is mostly snow-free. Although the Tristkogel is one of our favourite summit hikes in Saalbach Hinterglemm, there is quite a bit of snow still surrounding the peak, and so we have decided to opt for the Saalkogel tour. The starting point is at the parking area in Lengau at the end of the valley in the “Home of Lässig”. Anyone wishing to reach the summit for sunrise will not be able to take the noddy train to the Lindlingalm as it is too early. However, we follow a wide forest trail, which is quite charming in the morning hours, when the path is not so busy, and it is only the chirping of birds which breaks the silence of dawn. The undergrowth crackles to the left and right sides of the trail, which although little spooky, is at the same time beautiful. We would most certainly recommend that you pack a torch for a tour such as this. 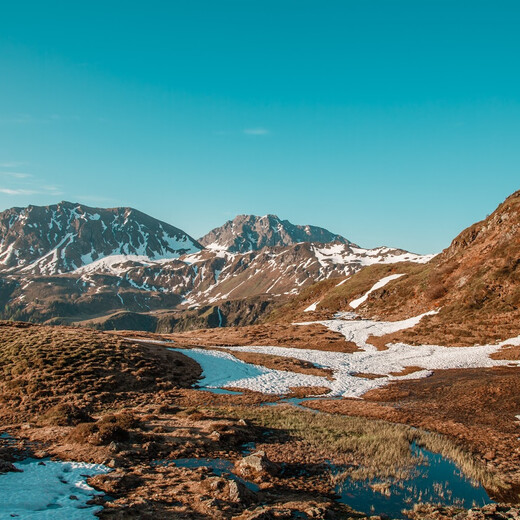 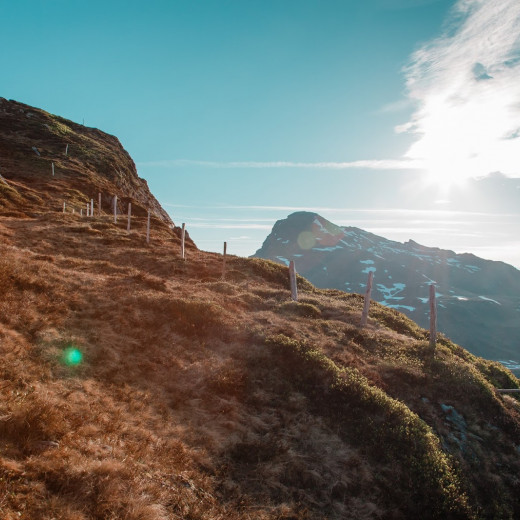 Last ascent to the peak 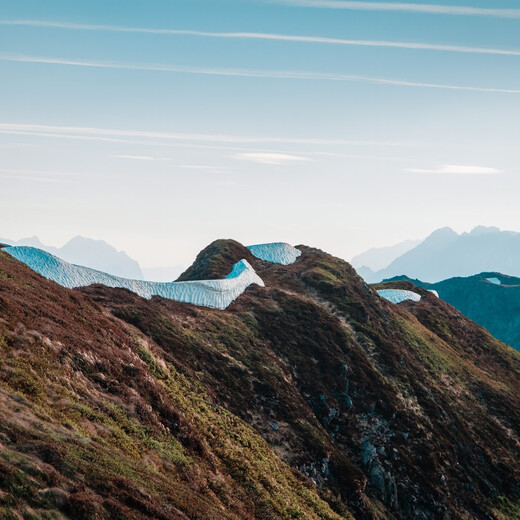 Tremendous views from the end of the valley

At the Saaljoch the path splits in the direction of the Tristkogel and the Saalkogel. We follow the way to the right and continue along a broad, sometimes snow-covered ridge to the summit. As well as the Tristkogel and Staffkogel there is a lesser-known mountain at the end of the valley. Nevertheless, the view is by no means less grandiose. Especially during the morning hours, the air is crystal clear, and the distant peaks look close enough to touch. In good weather conditions, in addition to the Wilder Kaiser and Leoganger Steinbergen, it is also possible to see the Geißstein and the backdrop of the Hohen Tauern mountain range. Once at the summit it becomes apparent that getting up early for a sunrise hike was well-worth the effort. The majority of hikers will start their ascent hours later, and at this time one can enjoy breakfast while chilling and letting the spirit wander. We take an opportunity to film some really cool scenes with the drone.

Sunrise with Staffkogel in front

A stop at the Saalalm

The descent leads us down to the Oberreiter Joch, between the Saalkogel and Staffkogel. We cross a wide basin below the Saalkogel and reach the route for our ascent. After a short distance, we head right and follow the signs to the Saalalm.

This alternative is a little longer than the ascent over the Ossmann Grundalm but more easy-going. On predominantly wide tracks we eventually reach the quaint Saalalm, where from the terrace there are magnificent views of the surrounding peaks. We meander back down to the Lindlingalm on the trail of 1.5 kilometres. At the Lindlingalm the tour can end on a relaxing or a more active note (there are many attractions in the area like Baumzipfelweg or Hochseilpark). We take a ride on the noddy train back to the starting point at the Lengau car park. We would also recommend a hike to the Saalkogel at any time of day, not just for sunrise. By taking the noddy train, the tour is shortened from 14 kilometres to 10 kilometres.

The “Home of Lässig” Walk