Pebble stones fly left and right as Joachim Mitterer hits the pedals and, with a focused gaze, passes through the trail’s first banked turn. Still, fun is not the reason why the passionate cyclist and mountain rescuer is out and about on the tracks of the Home of Lässig today — he is a member of Saalbach Hinterglemm’s newly established Bike Patrol and is currently on his way to an accident on one of the region’s many cycling trails.

Since summer 2019, mobile first responders have been stationed on all four biking mountains in Saalbach Hinterglemm in order to respond to accidents and emergencies. Joachim Mitterer, who I met at the Reiterkogel mountain, says, “I have been an active member of Saalbach Hinterglemm’s mountain rescue team for years. As mountain rescuers, we got called to one of the four trails on a regular basis during the summer and one of our teams was always either on the go or ready to go. This is why we suggested the idea of setting up a bike patrol based on the North-American model to Bergbahnen Saalbach Hinterglemm, the region’s cable car company. First responders with mountain bikes, positioned across the various cable car stations, would be able to provide quick aid, safeguarding and evacuation in the event of an accident. The first responder is also the one who decides whether a colleague has to make their way to the accident via quad bike or whether a helicopter evacuation will be necessary. Our idea was received well by the cable car company and was implemented quickly. We received new Rotwild bikes, Endura outfits, IXS helmets, Ergon backpacks and additional equipment to help us perform our duties.” 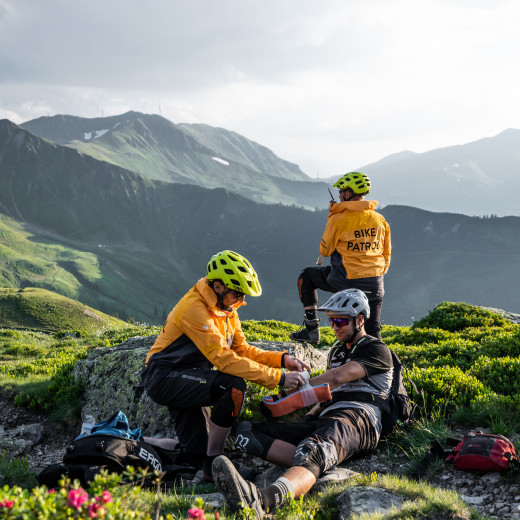 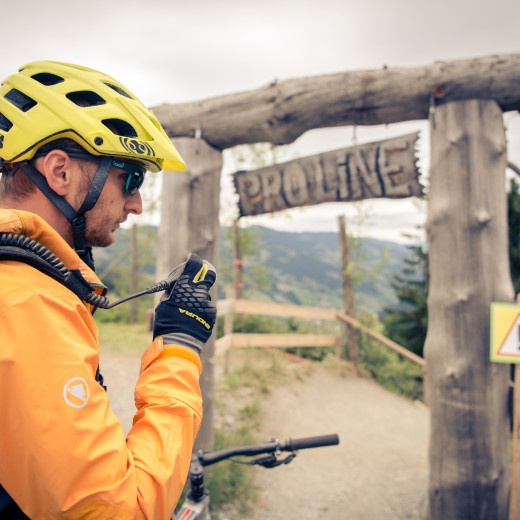 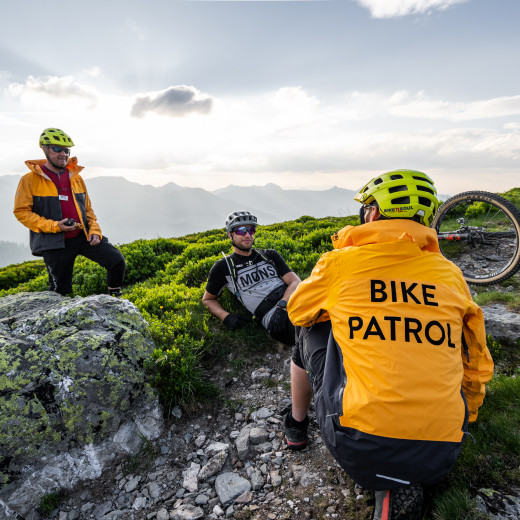 Just like Joachim Mitterer, most of the other team members are also on active duty as skiing rescuers during the winter months. They know the mountains inside out and in the event of a distress call, they must decide whether to approach the scene via quad bike or if they should hop onto a mountain bike and assess the situation from a distance. In their rescue backpack, they carry emergency equipment to aid injured persons, and the “guardian angels on bikes” are always connected with headquarters via radio communication. Joachim shows me a map of the Reiterkogelbahn cable car with its two biking trails: “Every track has these small signs positioned along the way, so-called rescue points, which display the exact location and position. This way, the team always knows exactly where to go, even in the event of a helicopter rescue — our excellent helicopter landing spots were decided together with the pilots of Martin6.” And if there happens to be no emergency to attend to, then the Bike Patrol will be more than happy to provide information about Saalbach Hinterglemm and the entire cycling offer.

Quads are also available for the Bike Patrol.

From photoshoot to emergency

Just as we’re about to start taking pictures for this story at the Pro-Line, we suddenly hear screams coming from somewhere on the track. Joachim is immediately ready to go, and, after a quick “I’ve got to go and see what happened”, he’s already hopped on his bike. As an expert biker in his own right, he masters the banked turns with ease and reaches the injured person in no time. The victim is still on the ground, entangled in his downhill bike, when Joachim reaches him. The track is immediately secured, and the person is moved away from the risk area. The bikers on the trail, who have begun riding down the track, are super disciplined. Everyone offers their help and traverses the scene slowly and carefully.

The first aid material is in the backpack.

Joachim reaches for his equipment and, after providing first aid, he accompanies the young biker to the quad bike, which will take him to additional medical attention down in the valley. “Bikers are pretty tough,” Joachim says while passing by. The biker, still a little green around the girls, but already with a smile on his face and his arm in a sling, says, “Thank you for the quick help — I didn’t even process what had happened, and then the Bike Patrol was already by my side. You guys are great!”