Today, Saalbach Hinterglemm is known as the “Home of Lässig” and the Skicircus Saalbach Hinterglemm Leogang Fieberbrunn is considered one of the leading ski resorts in the Alps. But what if we turn the wheel of time back a little? How does a village of mountain farmers become one of the best ski destinations around? As part of this new series, we will be looking through the local archives and tell you the story of how it all began.

The year in which Saalbach Hinterglemm was referenced for the very first time. Back then, the town was still called Dorf Clemb, Glemb, Glem or Salpach. Contrary to what one might expect, the name Saalbach was not derived from the Saalach river — or the Saale, as it used to be called — but from the Salpach, a stream that connects to the Saale, known today as the Spielbergbach. The name of the valley itself, “Glemm”, goes back to the Germanic root for “glimmering” or “glowing”, and refers to a glittering, shiny body of water — the Saalach river. The name persisted for a very long time — even in the second half of the 19th century, administrative writings were routinely addressed to the “Apostolic Vicariate of Glemm or Saalbach”. Only in 1987 did the provincial government officially change the municipality’s name to “Saalbach Hinterglemm”, as requested by the community.

That is Saalbach Hinterglemm’s exact location as per geographic longitude and latitude. Embedded at the foothills of the Kitzbühel Alps, the Pinzgau Grass Mountains and surrounded by the Lofer Mountains, the Leogang Mountains and the Hohe Tauern mountain range. Framed by the three-thousanders of the Hohe Tauern and the rugged summits of the Limestone Alps, Glemmtal has always been dominated by a unique climate. In the local archives, it says: “The greywacke zone is located amid the Limestone Alps, which surround it like a wall and acts as a weather and climate barrier. The climate is harsh, the valley regions are three to four degrees colder than they should be in light of their elevation. The area is marked by strong and lengthy winters. Springs are brief and cool, since the melting of the snow requires much warmth, summers relatively hot and high in precipitation.  Autumns are bright and warm.” Though the heavy snowfall brought the poor farmers a lot of difficulties, often causing lengthy food shortages during the winter, it is also exactly what attracts so many winter sports enthusiasts to the region today. 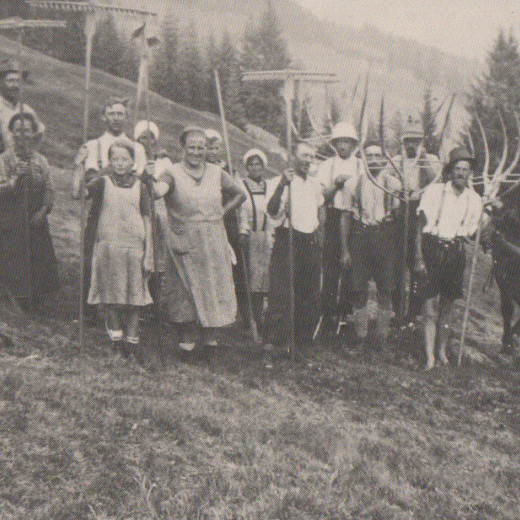 Bringing in the hey 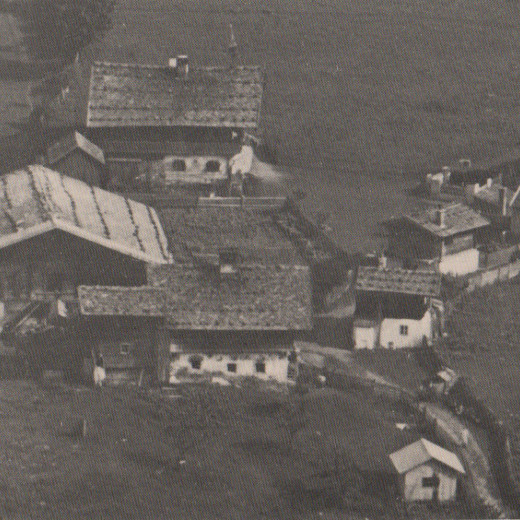 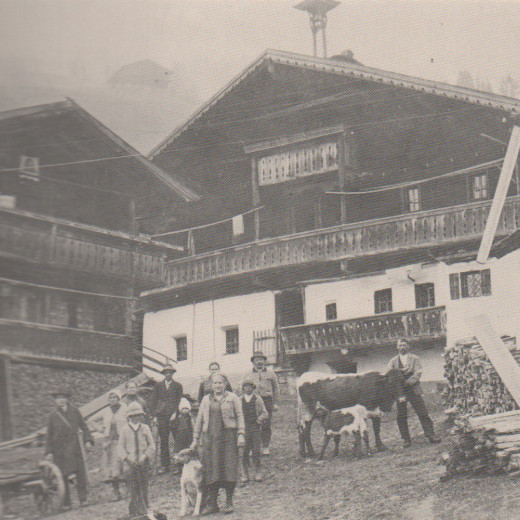 Covered in thick coniferous forests and frequently visited by floods, the valley ground of the Glemmtal valley was not particularly well-suited for settlers. The wide pastures, however, had already been discovered by farmers from Zell am See and Saalfelden in the 11th century, who used them for their cattle. Only in the 12th century did the first farmers settle permanently on the freshly cleared valley floor and the sunny ridges by the hillside. The Schwaige Krumpfeichte estate in Eibing was mentioned for the first time in 1222. From 1350 to roughly 1500, around 82 buildings and farms were listed. Many of them still exist today. Some of the farms were divided when the families grew to large and had prefixes such as “Vorder-“ (“fore-”), “Hinter-“ (“back-”), “Ober-“ (“upper-“) or “Unter-“ (“lower-“) added to their original names. But the village community in today’s sense only developed much later.

The timeline from the first settlers to the establishment of a village…this you’ll read about in the second part of the “A look back” series.