Autumn is in the air! And in the kitchen, too! For as soon as you start seeing “Schepserne”, „Schepsas“ or “Schöpserne” on the restaurant menus in the “Home of Lässig” again, you’ll know one thing for sure: It’s autumn again!

Why exactly “Schepserne” is such a typical autumn dish, how it is best prepared and why the traditional Pinzgau recipe endured such a bad reputation for so many years, are just some of the things that Daniel Resch from “Appartements Liebe Heimat” in Jausern is happy to explain to me. Together with his partner Angelina Hasenauer and his mother Marianne, the young caterer runs the 2015-built rental apartments as well as the adjacent restaurant here in Vorderglemm. Daniel also tends to the closely located farms, explaining: “My grandfather was the one who changed the business in order to focus on the sheep. The slope behind the house is very steep — we call it “a Bockleit’n” here — and sheep are also not as labour-intensive as cows. Today, we keep around 20 Jura-sheep, most of which are slaughtered in autumn or in the spring. We use everything from the sheep — that’s very important to us! That is why we occasionally have lamb liver on our menu, use the bones when cooking soup and why our homemade sheep sausages, which we sell in our shop just like our herbal salt, are especially popular. And during autumn, we also serve the traditional “Schepsernes” at our restaurant.

We take a walk out onto the “Bockleit’n”, which really is as steep as Daniel had said. Angelina and their son Luis also join us as we go out looking for the sheep. Daniel has got a bucket full of tasty treats and moves out onto the pasture, attracting the dark-brown sheep. Immediately, they hop over to him as the caterer and farmer pets them behind the ears while they eat from his bucket. Joyfully, they hop around the sunny meadow. The stable door is left open in case they may want to go back inside, but it looks like the gentle animals prefer to take in the last of rays of warming sunlight from the autumn sun. 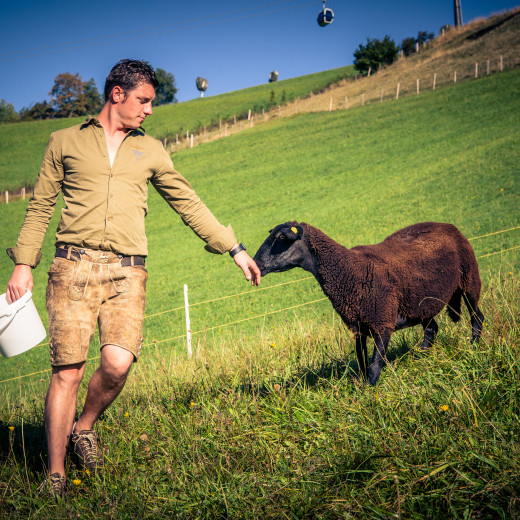 The meat comes from the own agriculture 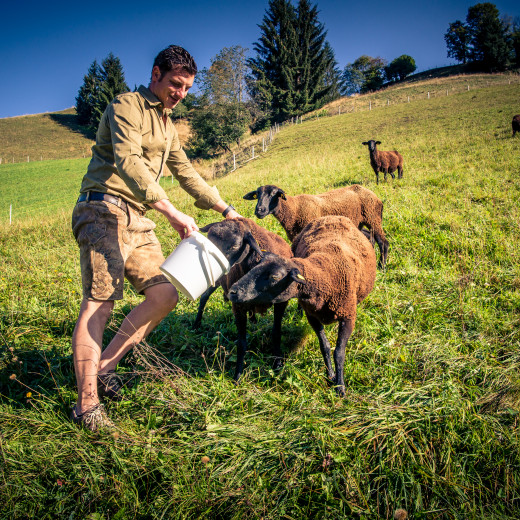 Daniel Resch with his Jura sheep 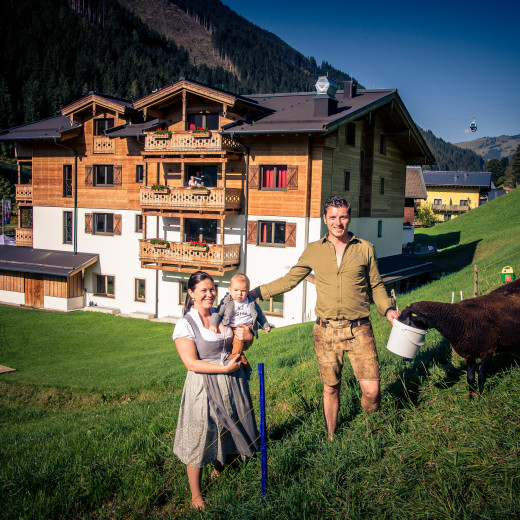 Daniel with his girlfriend Angelina and son Luis

Much better than its reputation

Daniel Resch also happens to know why “Schepsernes” is still viewed with scepticism by some: “Back in the day, when the sheep were taken down from the mountain pastures in September after a long summer, everyone who had helped and the whole family were invited to eat “Schepsernes”. This usually entailed slaughtering an old sheep, so that everybody’s belly could be filled, which had a very particular and unique flavour. And once the stew started to cool down amid the big feast, it began to develop a very strong “sheep-like” taste and smell, which ended up ruining the traditional dish’s reputation for some time. However, everyone would be in for a good surprise if they only took a culinary leap of faith — today, lamb meat is used exclusively for Schepserne, which has a much more delicate flavour!”

The stew dish is trending again, making new culinary friends. Daniel Resch’s restaurant always has lamb dishes on the menu, but after the short autumn break, when the business opens its doors again in November, it’s Schepsernes-time at “Liebe Heimat”. That’s also when head chef Sebastian Meszaros gets to do what he does best. The experienced chef gladly reveals the “Liebe Heimat’s” traditional recipe, with which anybody can cook the typical Pinzgau dish right at home. 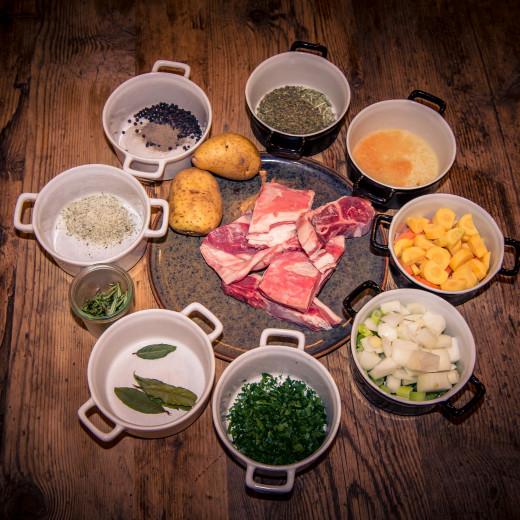 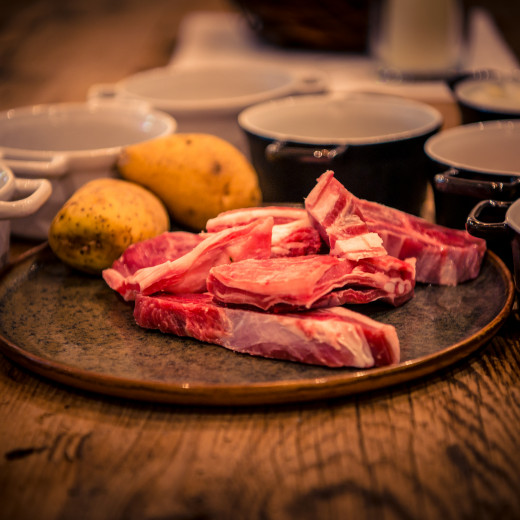 Lamb is the main ingredient 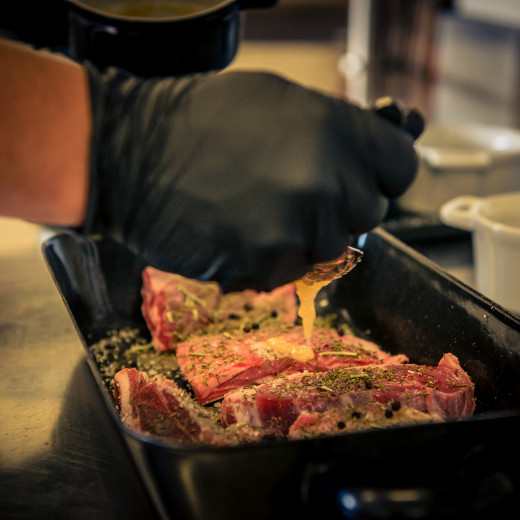 Marinate the meat with the ingredients.

Marinate the meat with salt, pepper, garlic, thyme, rosemary and vegetable oil. Add root vegetables and onion to roasting pan. Well marinated, steep everything together in the fridge for one and a half to two days. Only then, cut the skinned, raw potatoes into pieces and sear them in a pan. Also sear the marinated meat with the vegetables in the roasting pan and add the roasted potatoes. Add lamb soup until everything is covered. Briefly simmer on the stove and then place in the oven at 130 °C at the fan only setting for two hours. For the classic side dish — the spicy “Radi” — grate two black radishes and add salt. Steep for a little while and then press well. Season to taste with apple vinegar, pepper, sugar and around 0.2 l cream, then sprinkle with parsley. 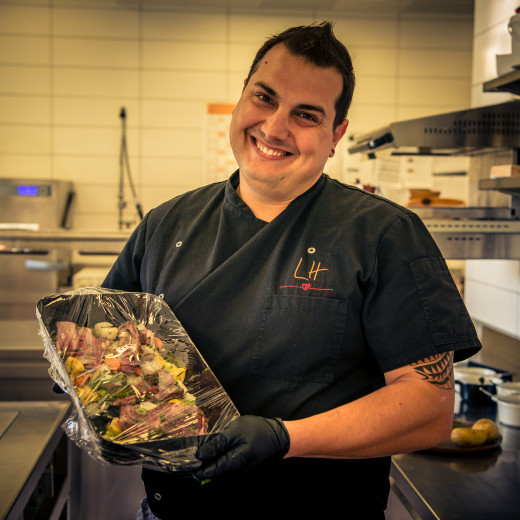 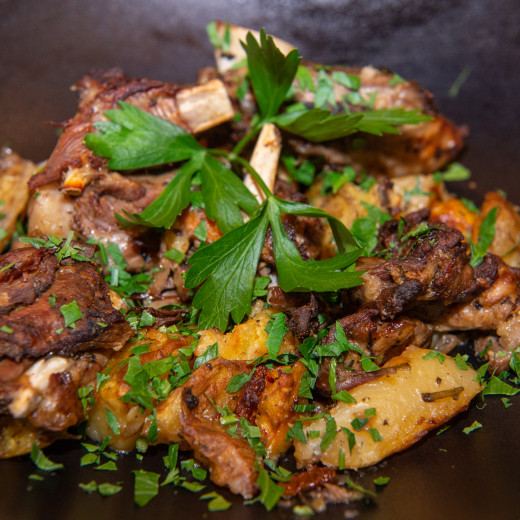 Schepsas - a traditional meal in autumn 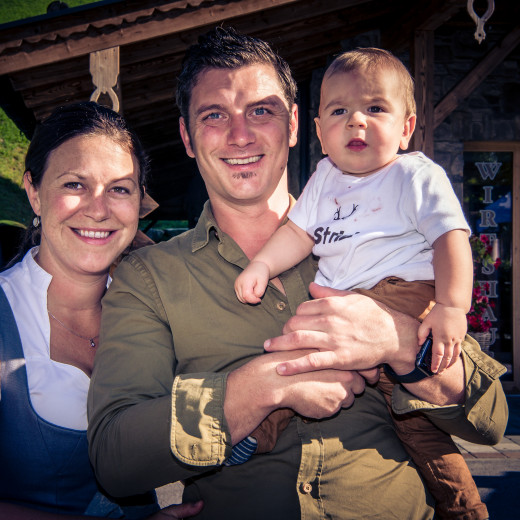 Angelina, Daniel and their son Luis

Daniel Resch has a special culinary tip for all Schepserne lovers: “The dish has to be served hot. The black radish adds a bit of spice and neutralises the fat. Perfect with a cold beer and followed by a good rowanberry schnaps!” And those unwilling to put in the effort at the stove simply have to look out for “Schepserne” on the menu on their next holiday to the “Home of Lässig”.