The golden autumn has arrived. Time to bring the cows home and prepare the mountain pastures for the winter. Is there anything else to be done for farmers in the mountains around Saalbach Hinterglemm after the cattle drive? What on earth is the funny sounding "cow pat golf" and why do trees and stones pile up on the alpine pastures?

The calves greet me on Reiterkogel with loud moos. They look at me almost with reproach as if to say, "Are we going back home yet?" After some wonderful weeks of summer freshness on the high pastures of the Glemmtal valley, the time has come to return to the local stables. The cows grazing the last tufts of grass here around Reiteralm are from the neighbouring Hochfilzen and are picked up by the Tyrolean farmers on foot according to old tradition and then driven across the "Deisch-Graben" divide. Excitement is in the air. The young farmers lure the remaining cattle, scattered on the meadows, with shouting and knocking on the full bucket in their hands. It contains the "G'leckert", as Isabella tells me. She also helps out, of course, because her father, Hans Adelsberger, looks after the cattle here during summer. 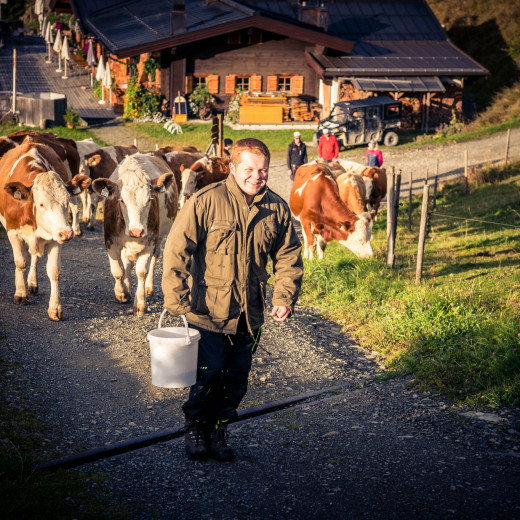 Alex walks ahaed with the salt. 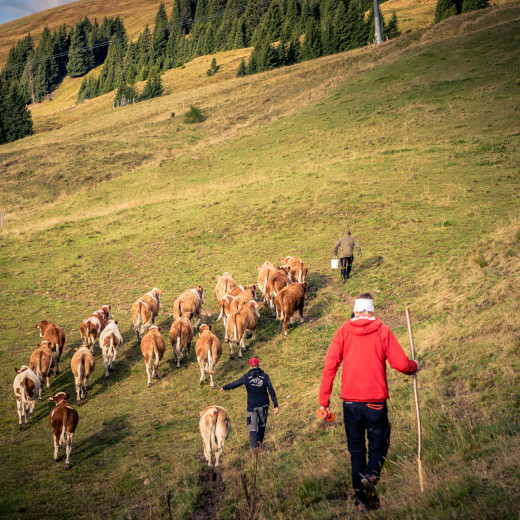 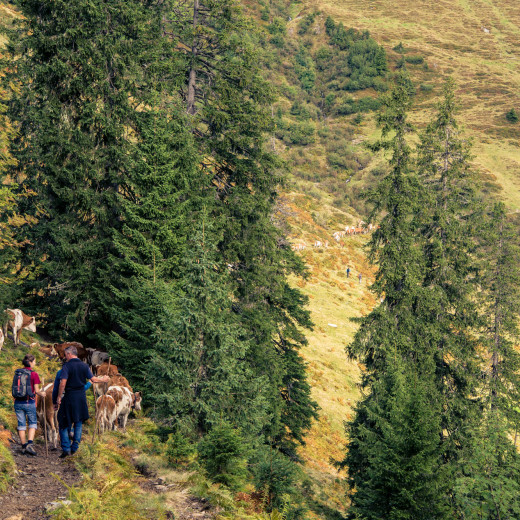 Crossing the border to Tyrol.

"G'leckert is a mixture of concentrated feed and salt ¬– the cows like it and can quickly be persuaded to follow us," says Isabella, who works at the Tourism Association. She seems to be a cow whisperer, as 22 four-legged milk suppliers have gathered around her in a very short time, and together with her cousin Alexander and friends, they drive the herd. "We are going to the Rosswald chapel above the Rosswald hut. There, we meet with my father and the Tyrolean farmers who have herded the rest of the cows from the area.” The excitement among the cows turns into an eager spirit of departure. The companions keep an eye on the herd to prevent any curious cow from leaving, and quickly spring into action to return the runaway. At the Rosswald chapel, the herd is brought together with the rest of the cows but there is no time for a cozy chat with the Tyrolean farmers, because the experienced cows are in a hurry, already rushing towards the Deisch-Graben. "They want to go home," the farmers laugh apologetically and wave before crossing the border to Tyrol. 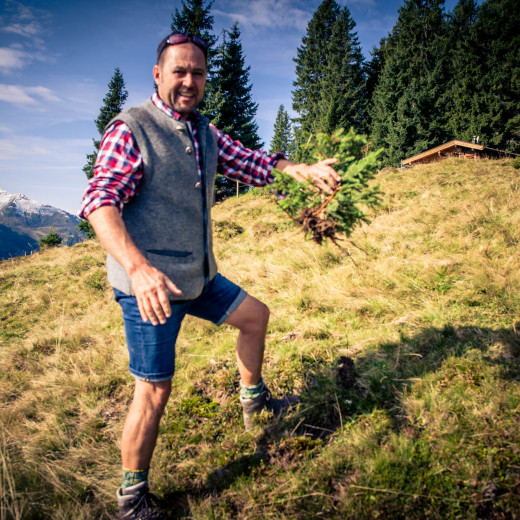 Pulling out little trees is Schwenden. 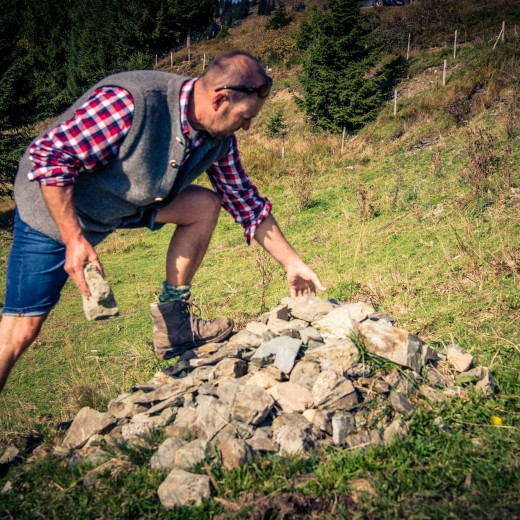 Stones are gathered on a pile. 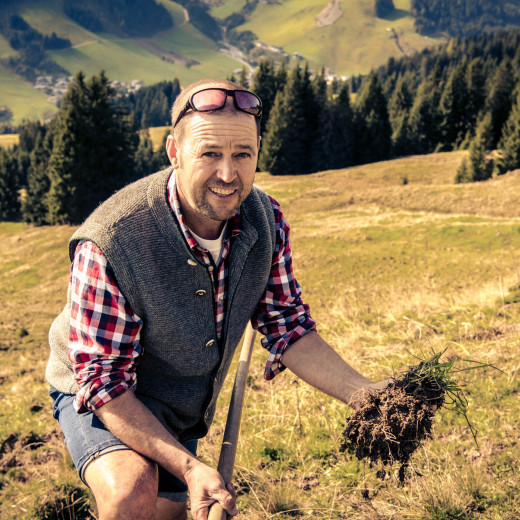 Hans Adelsberger is a passionate farmer

Okettln is the term for spreading the cowpat

It has suddenly turned quiet on the alpine pastures as the last cowbell sound has faded. We hike back across the gentle slopes of the Pinzgau grassy mountains which glow in rich yellow and red, making our way back to Hans Adelsberger’s hut. In the summer, the farmer works as a hiking guide for the Saalbach Hinterglemm Tourist Board. In winter, he has been working as a ski instructor in Hinterglemm for many years. You can tell that he is relieved that the alpine summer has gone well and that he has been able to return all the cows to their owners. Can he start relaxing now and taking it a little easy? "But no, now we have to clean the shed and prepare the mountain pastures for winter!" He takes the necessary tools out of the shed and explains, "I distribute the cow pats from the stable on the renaturalised slopes along the forest road. The cow pats on the pastures are skilfully distributed with the pitchfork using large swings – this is called “okettln”, he says and pretends to do a golf swing. "The soil is fertilised by spreading the cow dung," he laughs. Along the way, he collects large stones into a heap and lines the drainage trenches with them. "This is important because, in heavy rain, a controlled water drainage is achieved this way. I also replace any pieces of grass which has been moved by the cow’s hoofs because the grass area must remain intact.” The term "Schwenden" is used to mean the removal of wood, such as small saplings. This ensures that the cultured landscape is preserved. "If us farmers would not clear the area, the alpine pastures would become completely overgrown within ten years.” 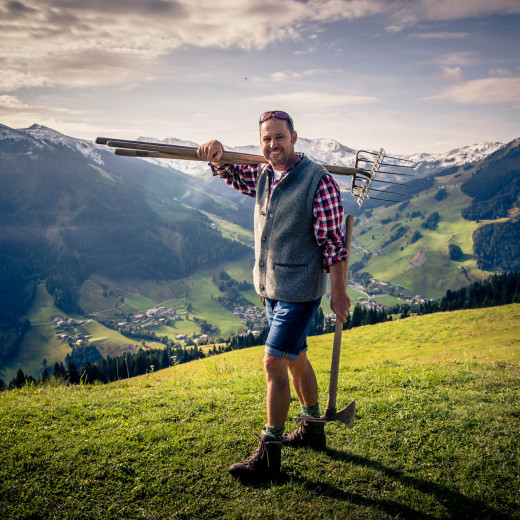 A lot of work awaits the farmer 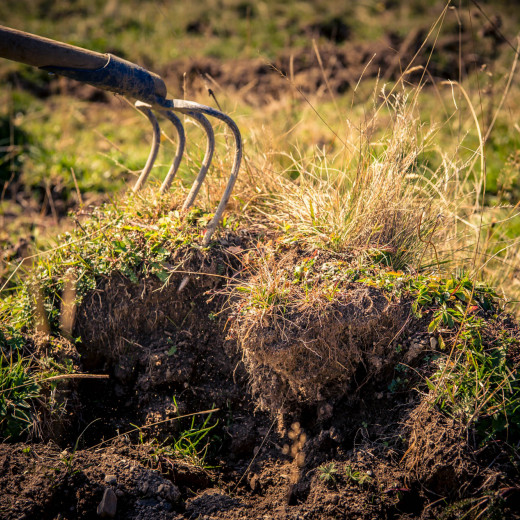 Before the winter covers the pastures under a thick layer of snow, all fences must be laid down. In the ski area, this work is done by the lift staff – but also the remaining fences are flattened. "They stay under the snow. At the same time, I take care of the production of new fence posts. The wood needs two years to dry out in the stable – then the posts do not rot as quickly. I erect tall snow poles around the stable and the water troughs for the cows, so that snowmobiles on the slopes don’t inadvertently run over it in winter. In general, the cleaner and more accurate I work in the autumn, the less hassle I have in spring, when I make the pastures fit again for the next four-legged summer guests."