“Ranggeln” has long been a tradition in the Glemm Valley

When explaining Ranggeln, one often draws parallels to wrestling, yet Ranggeln is an independent sport, with ancient origins. Saalbach Hinterglemm has for decades been a focal point of the sport. The sport of “Ranggeln” is once again popular, after a generation gap and the era of Kendler & Riedelsperger. Today, young lads attend numerous events where they are able to demonstrate their skills.

Why Alpine villages such as Saalbach Hinterglemm are a haven for “Ranggler” talent, is outlined in the history of the Glemm Valley. In times gone by, the valley was a farming community where farmhands and dairymaids often disputed their differences by heading to the Alpine pastures and competing in a round of “Ranggeln”. The “Ranggel” victor was titled the “Hågmoar”, originating from the word "Håg”, the type of fencing one finds on Alpine pastures. A Stoahåg – stones that have been piled up on a small wall – marked the border of one Alpine pasture to the next, just before the barbed wire or electric fence. When a fight broke out between the strong young farmhands, a “Ranggeln” challenge was arranged. The victor of the challenge was known as the “Moar”, the Master, and this Hågmoar was a person to look up to and respect, a title that was worthy. 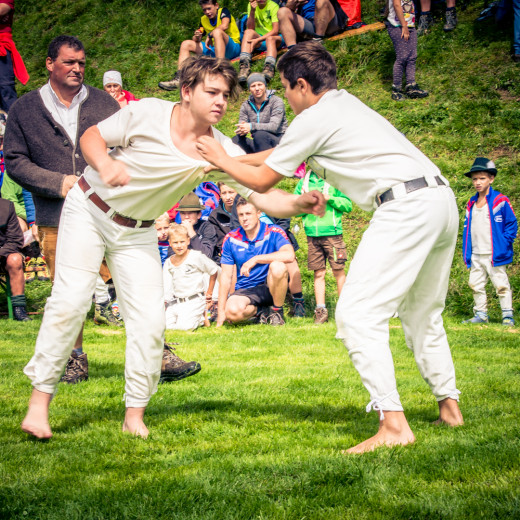 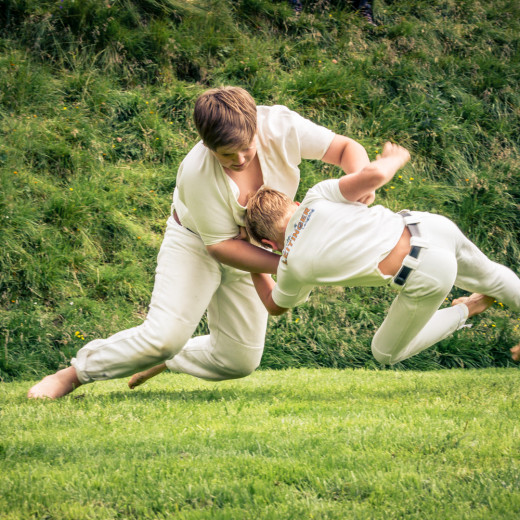 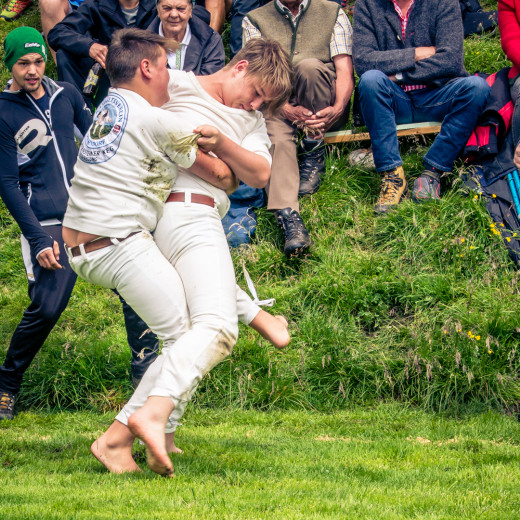 To be crowned victor of the legendary „Hundstein-Ranggelns“ is most significant. This event takes place at the Hundstein on yearly basis and is reportedly the oldest sporting event in Europe, if not worldwide. The Hundstein – a mountain between Maria Alm and Zell am See, just a few kilometres away from the Glemm Valley, exudes an air of mystery, and the “Ranggler” make strenuous efforts to be victorious in the natural arena, as Hans Bernsteiner, President of the Salzburger Rangglerverands explains in an interview: “What an Olympic gold medal means to a skier, is the equivalent of what the Hågmoar flag means to a Ranggler”.To win the Hundstein challenge, is the career highlight of any Ranggler”.

Peter and Paul Mitterer, from Hinterglemm, are still too young to participate in Hundstein-Hågmoar, but are proud to enter the ring as competitors in their age group category. Peter and Paul are 12-year-old twin brothers, and have been taking part in the sport of “Ranggeln” for the last 8 years. “Why Ranggeln” I ask, to the enthusiastic reply “Well, Dad was also a Ranggler”! This clarifies the situation, the sport of Ranggeln is in the family. Coach Helmut Kendler, from Hinterglemm, confirms this “There are families where the sport of “Ranggeln” has been a centre piece for generations. My two brothers and I were successful Rangglers and my son is also now a Ranggler. For over a 12 year period, I was a Hundstein- Hågmoar favourite, until I finally took the title in 2001- a huge honour! Our association in Saalbach Hinterglemm consists of 25 active members between the ages of 5 to 32. Peter and Paul are hopeful newcomers and who knows, maybe one day the title of Hundstein-Hågmoar will return to the Glemm Valley”. 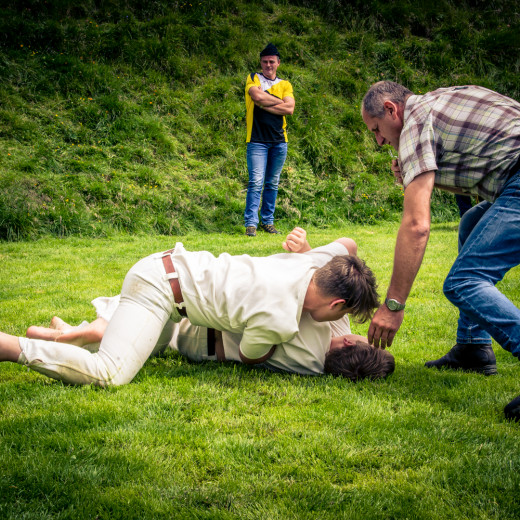 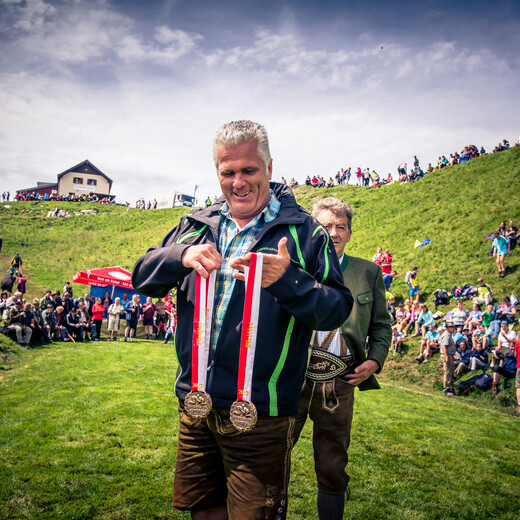 President Hand Bernsteiner with the medals 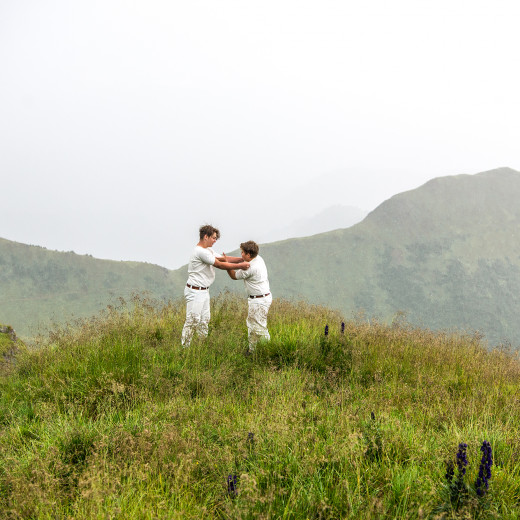 The twins warming up for the competition.

Saalbach Stories on the Hundstein

Saalbach Stories accompanied the two lads from Saalbach Hinterglemm, to witness a great sporting performance on the Hundstein. In a thunderstorm, rain and mist, the mythological mountain is rather foreboding, but after a hearty breakfast, a real “Ranggler’s” breakfast, consisting of roast pork and dumplings! – A short mountain Mass, the sun eventually breaks through the clouds. Just in time, as Peter and Paul head off in the direction of the natural arena, just below the Statzerhauses, where they slip into typical garments used for Ranggeln: a tear proof, collarless shirt and matching trousers with belt. The thick linen fabric is pure white, and I ask the two of them how they remove the grass stains. “Quite simple, after a Ranggeln tournament, we give our clothes to Mum”! Their Mum reveals that part of the stain removing process includes leaving the garments out in the sunshine and moonlight, which helps to remove the stains. The lads enter the ring barefoot and at the blow of the referee’s whistle, the clock starts ticking. If the fight is not decided within six minutes, the two competitors do not make it to the next round. A fight is decided when you press your opponent on both shoulder blades with sufficient pressure that they fall backwards onto the ground. Both Peter and Paul give a bravura performance in the ring, even if their opponents are sometimes a couple of inches taller, they show no fear as they are pulled and tossed around. The public exclaim they want to see an “Aufdraha” or “Knupfa”, two movements unique to the sport of Ranggeln, to which the Ranggler respond with some spectacular throws and applause erupts around the ring. Peter and Paul are so good that they will face each other as opponents in the finals of their age group category. 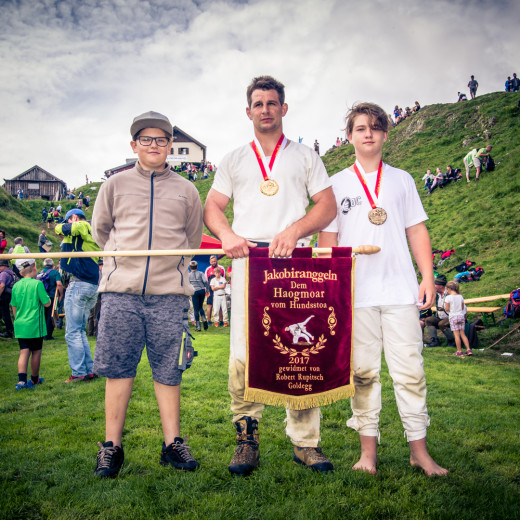 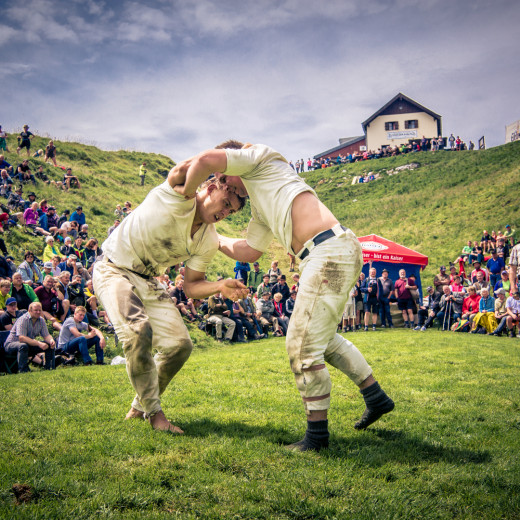 The later all-over-winner in his final fight 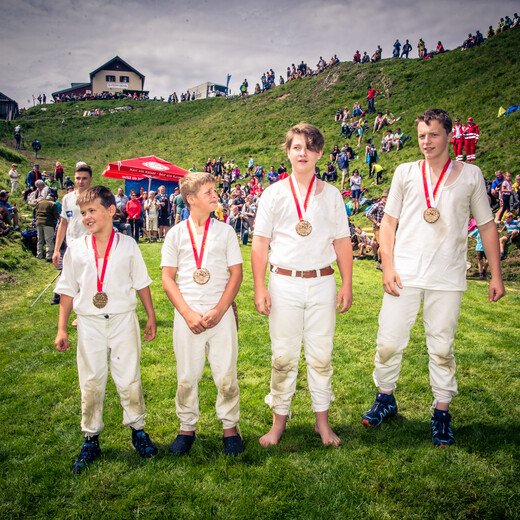 The winners of the younger categories.

This time Peter is one step ahead and skilfully pushes his brother on to his back, resulting in Peter being the winner in his age group category. Helmut Kendler pats them both on the back, exclaiming “A great effort from the two of you”! The two youngsters have a long distinguished career ahead of them, with the chance arising for Paul to take his revenge at some time in the future. Ranggeln on the Hundstein mountain takes place on the last Sunday of July every year. Also, every two years, there is a Rangel competition in Saalbach Hinterglemm – the date for 2018 can be found under www.saalbach.com as of spring.