E-biking in the Glemmtal valley

There are three options in Saalbach Hinterglemm if you want to go up the mountain with your mountain bike — either using your own strength and your bike, taking the ropeway gondola or grabbing an electric bike for a more comfortable ride. Today, we have chosen option 3 — the e-bike — and didn’t regret our decision even one bit.

“Mountain biking can actually be quite comfortable,” we realise optimistically during our ascent. Normally, we go up the mountain using our own strength, but today we’re making an exception — the day is still young, after all, and we’ve still got 2000 metres of elevation ahead of us. And our electric bikes are almost making more noise than us. No surprise really, since we’re riding with full power! “Vollgas”, as the locals would say.

Having arrived on top, the Schattberggipfel summit provides a breathtaking panorama view of the Leogang Mountains and the Steinernes Meer plateau. On the opposite side, we spot the trails at Kohlmais and can even see the many downhillers rushing down like little ants. In the south, the Tauern mountain stands out particularly whereas the westbound three-thousand metre mountains are an almost unreachable goal for us bikers from here. The high summits are much more appropriate for mountain climbers — we prefer to stick to our “meagre” 2000 metres of altitude and continue our tour into the Glemmtal valley. 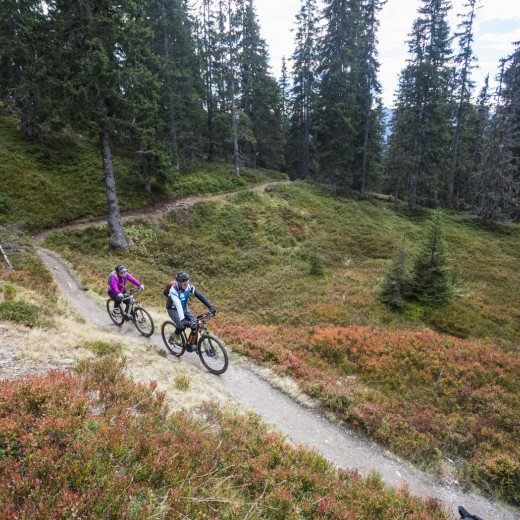 With full power to the peak. 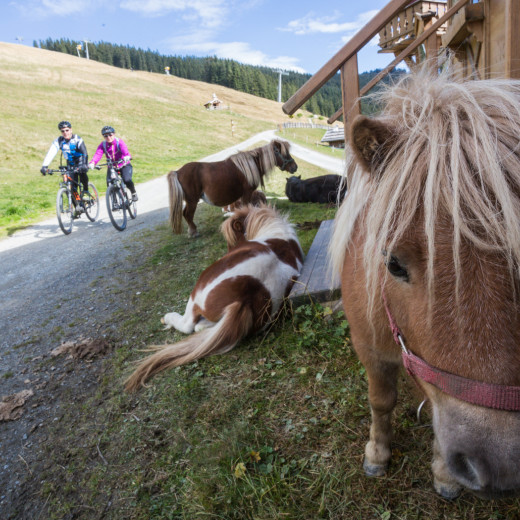 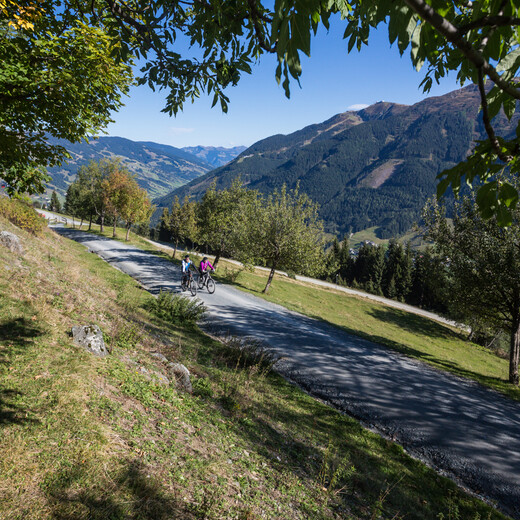 Just one more ramp or, in other words, 170 metres further up and then the fun can finally begin! Our first goal is the Hackelbergeralm mountain pasture before driving back to Saalbach via Reiterkogel mountain. Our electric bikes manage the steep gravel road up to the western summit without a problem. Just a year ago, we had to tediously push our bicycles all the way up. Thanks to the new technology, those days are over.

Fully charged on the Hacklberg trail
The Hacklberg trail begins right at the western summit. We take off on the first turns which extend across a rocky terrain still in parallel to the skiing slope. From up here, I have a great view of the course of the trail. As if created by hand, the trail makes its way gracefully through the landscape and then loses itself at the end of the mountain ridge. In the beginning, I still have some time for the occasional glance at the beautiful Alpine landscape. After a short flat stretch, however, the trail starts getting steeper and the first leaps start to show up on the way to the Hackelbergeralm mountain pasture. Luckily, the kickers are set up in such a way that they can easily be circumnavigated.

And now their time to shine has finally come. Our e-bikes are not only amazing uphill, but also downhill! The suspension works like usual and the weight is also not a problem, considering that the bikes weigh around 20 kilogrammes. After all, we were able to get used to the e-bikes prior to the tour and went on a couple of laps around our hotel. 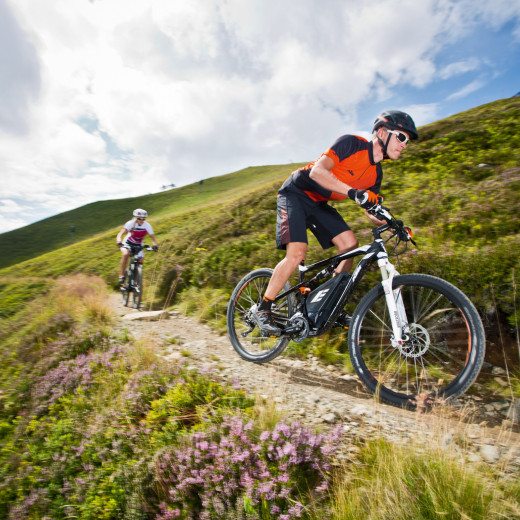 400 km of bike tracks are waiting to be discovered 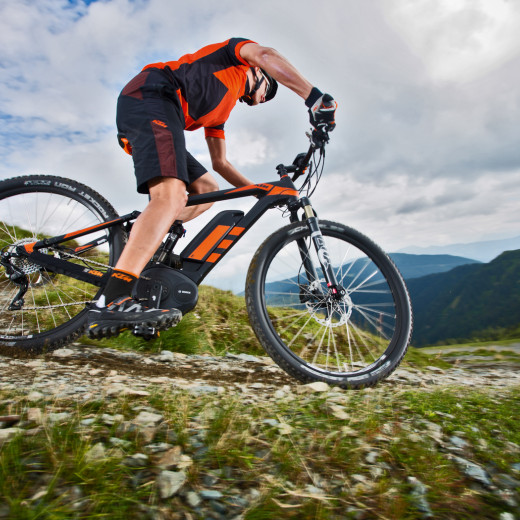 An E-Bike increases the tour reach. 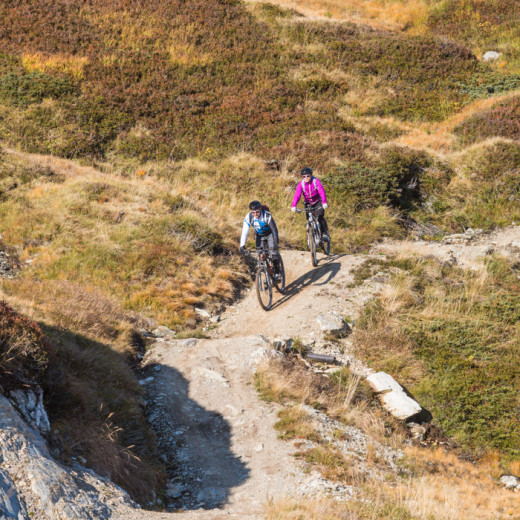 Downhill is also a pure delight

After the first wave of leaps and obstacles, it starts getting a little flatter again, but then the next wave already leads further downhill. Just before the mountain pasture, I pass by a small mountain lake, or a pond rather, where the sun’s rays beautifully reflect in the water.

After a quick break at the Hacklbergalm mountain pasture, we continue downhill towards Hinterglemm. We feel definitely recharged after the break and our batteries are still filled. And that was definitely needed, because our ascent up to the Reiterkogel mountain is guaranteed to use up a lot of energy — both from us as well as our bikes’ batteries! 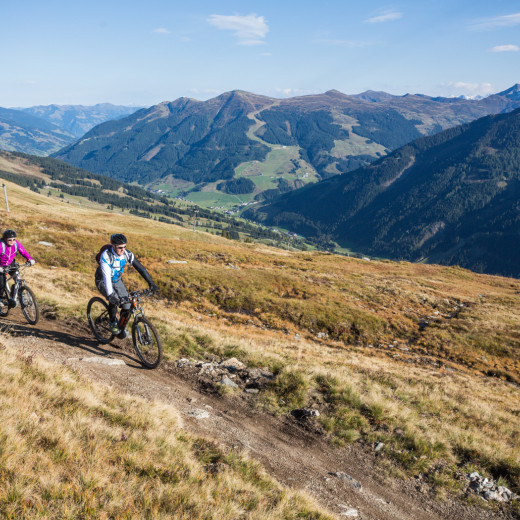 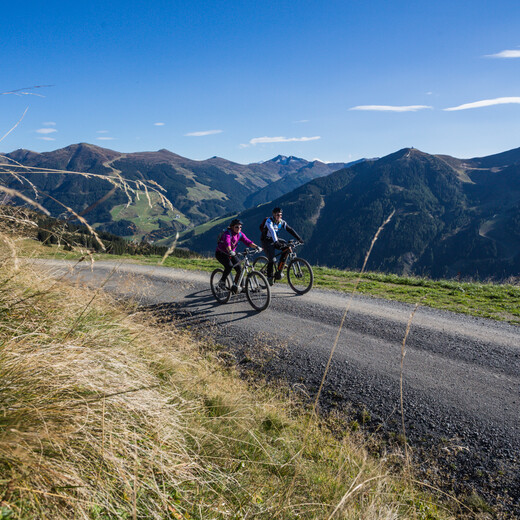 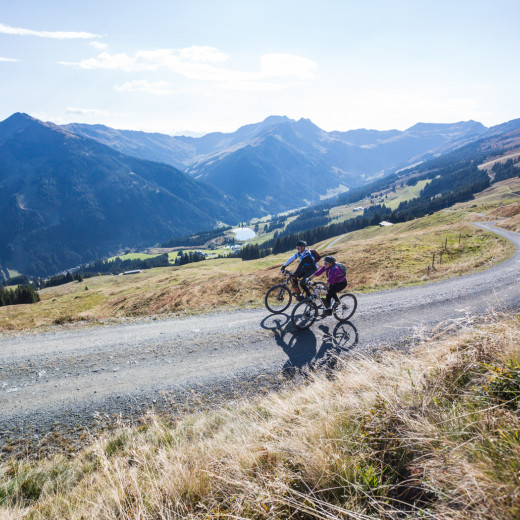 For endurance athletes
The Tyrolean tour (66.7 km / 3000 m of altitude difference): From Hinterglemm, the tour first leads up to the Rosswaldhütte hut and then downhill toward Hochfilzen via Reiterkogel mountain. From there, you ride until the district of Hütten, just before Leogang. Here you take a turn into the Schwarzleotal valley and pass by the Schaubergwerk plant uphill to the Mardeckhütte hut. The way continues underneath the Asitz lifts to the hut of the same name and then back into the Glemmtal valley — and finally via the panorama trail to the Spielberghaus as the final rest stop.

For freeriders
The Hochalm mountain pasture trail (22.4 km / 1000 metres of altitude difference): Ride across the Pfefferweg path from the Zwölferkogel valley station, pass by the Pfefferalm mountain pasture to the middle station of the Reiterkogel cableway. The trail continues toward the Rosswaldhütte hut and then across a wide forest way to Reichkendlkopf mountain just above the mountain station of the Hochalm cableway. Via the ridge, you make your way to the mountain station of the Spieleck drag lift and from there you get on a nice trail which finally brings you back down to the valley near Lengau via the forest roads. The last kilometres to Zwölferkogel are ridden along the valley.