It is time for the approximately 500 sheep to leave the Schattberg after a long summer in the alpine pastures and return to their stables. On September 14, the shepherd Gottfried Manzl and his helpers collect the woolly four-legged animals and take them to the "Schafischer" on the Gerstreitalm. Here, of course, the return of the sheep is duly celebrated.

We meet the day before the "Schafischer" at the valley station of the schattbergXpress to collect the sheep and Gottfried and his numerous helpers are well equipped. Solid mountaineering boots, hat, shepherd's stick and to be on the safe side, the loden cape is strapped to the rucksack in today's very changeable weather. For the helpers, the search and driving of the sheep goes cross-country and over hill and dale. In the area between schattbergXpress middle station and west summit the big herd is distributed. Although one already knows approximately where the black noses like to graze, where the Coburg fox sheep were seen yesterday and that the South African Dorpers seem to be waiting impatiently at the summit to go home, some runaways are always hard to find in the steep terrain. 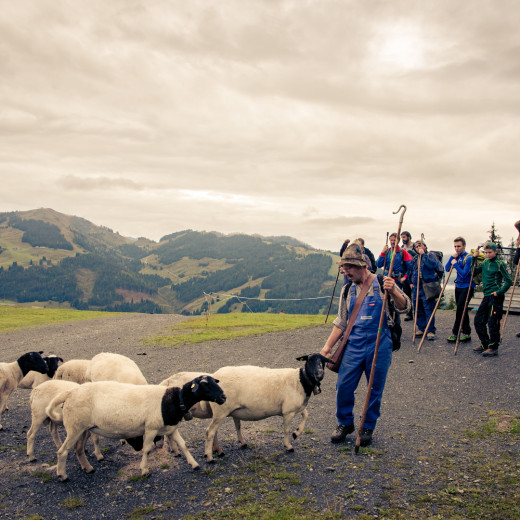 Gottfried and his helpers 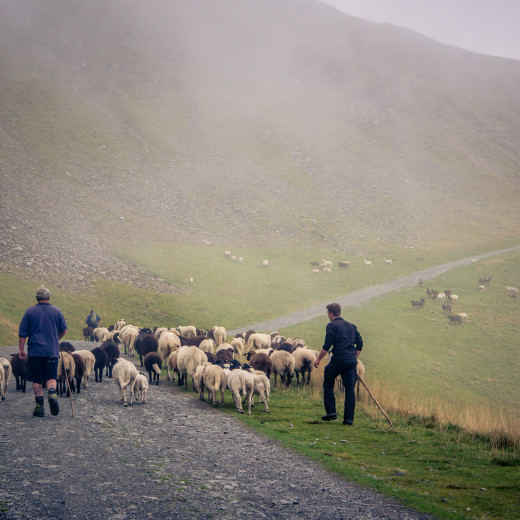 The herd moves up to the summit 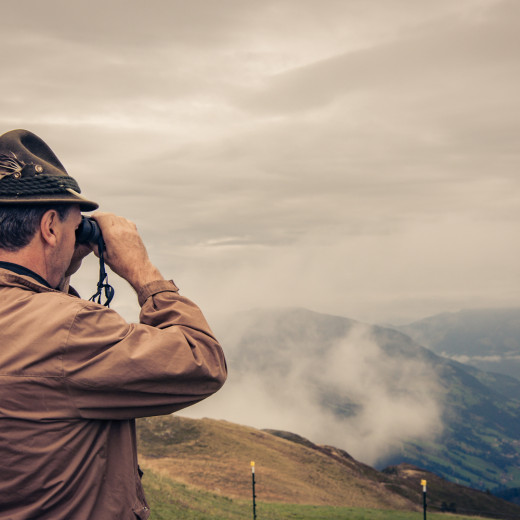 Where are the sheep?

The young helpers already take over the first sheep at the middle station and the steep ascent to the summit. A common meeting point on the ridge is arranged and we return to the gondola and float comfortably up to the Schattberg summit. The helpers are experienced and have sheep in the herd themselves. One part marches purposefully down to the reservoir, two others hold the sheep together in the summit area. "The summer was good for my sheep up here, the grasses up here were fat and green, but now it's time for them to come home to my stable", says one of the sheep farmers, as the fog wafts around the Schattberg summit. 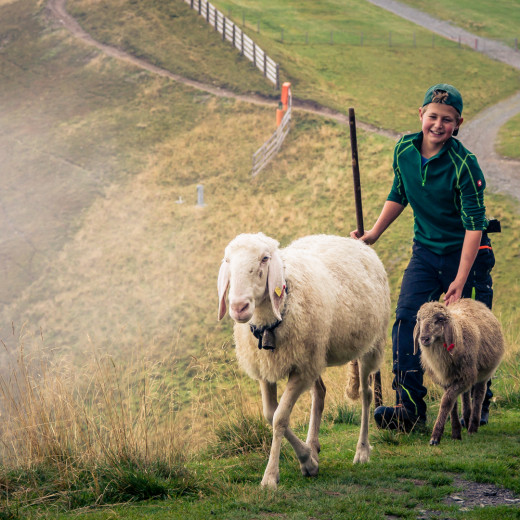 All farmers help together 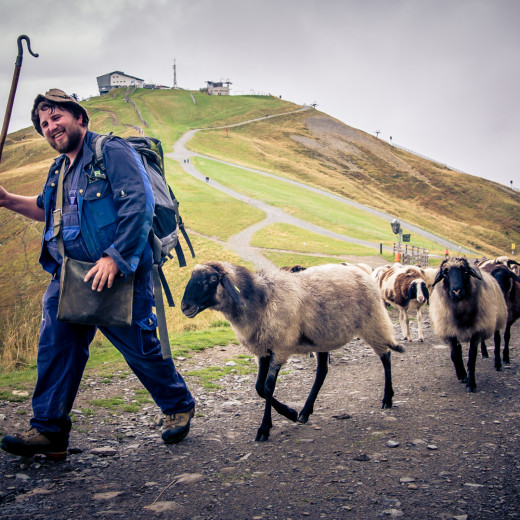 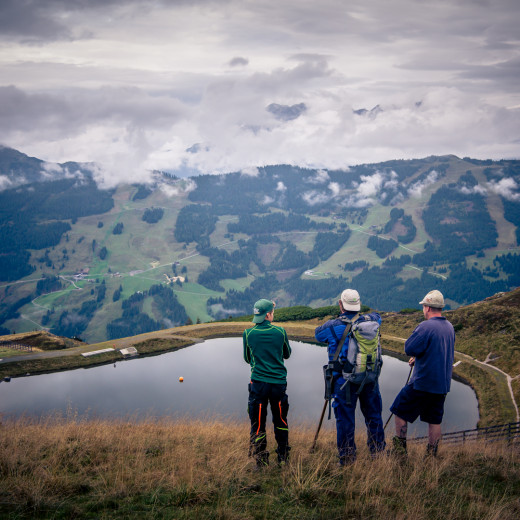 Looking for the sheep

The sheperds look for lost sheep

The shepherds make their presence felt with calls and whistles. The sheep happily come running and also the salt brought along in the bucket has a magical attraction on the sheep. So we see the first group coming up from the middle station: Sheep farmer with the salt bucket in front and behind him a waving cloud with well audible mowing and bell ringing. Individual scattered sheep push on the steep way to it and ever larger becomes the upward moving flock of sheep. Bikers and hikers have long since stopped and marvel at the hustle and bustle with us. Soon the helpers with the sheep have reached us and together we go to the Westgipfel summit. Lambs jump cheerfully hop around us - only the smallest lambs are carried by the shepherds on their shoulders. At the west summit there is a break and between the sheep everyone gets his snack. The landlord of the Westgipfelhütte brings cold drinks and together we get an overview. "Are all sheep here now? Where were the lambs delivered? Where do we still have to look for sheep", Gottfried inquires, but now the last driver with a few lost sheep arrives at the summit. "We are complete", the shepherds announce.

Lamb on the shoulders 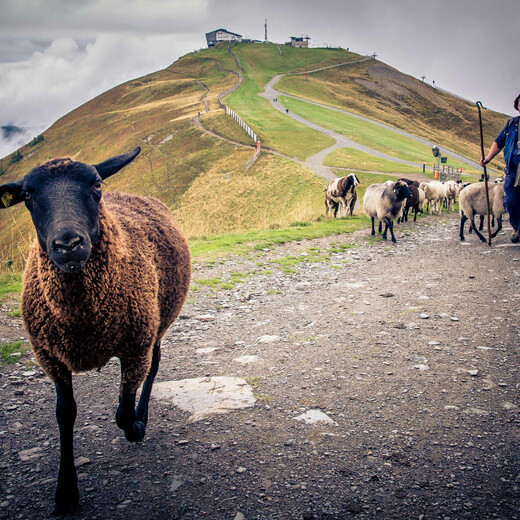 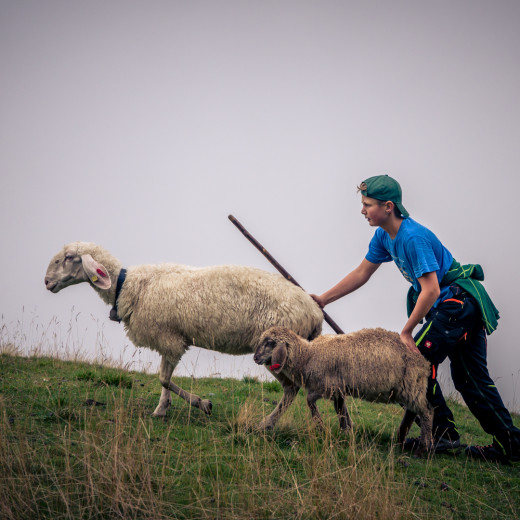 For the night we go a little way towards the valley into a specially built pen. There the shepherds spend the night with their herd. On Saturday at 10 o'clock the herd arrives at the Gerstreitalm in Hinterglemm. There with numerous visitors the traditional „Schafischer“ takes place with celebration, music and more regional culinary. "Schafischer has nothing to do with the shearing of the sheep, but comes from the allocation of the individual sheep to their owners. Each of the 500 sheep is handed over from a pen to his farmer, who then brings his herd to his farm. Of course there is a celebration at the Gerstreitalm, because after a good summer on the mountain pastures of the sheep we are all glad that all the sheep are back in good health with their owners. There is traditional food and many other products around the sheep to taste. In the next early summer we then move up to the Schattberg again with our four-legged summer guests".