An interview with World Games of Mountainbiking legend Reini Woisetschläger

We can call him the World Games legend, local hero, regular starter or simply Reini. One thing is certain, one can always rely on the fact that he will always be at the starting line unless he is prevented from doing so due to a severe injury. A native of Upper Austria, Reini Woisetschläger has been competing in World Games for almost 20 years. We have compiled a list of some questions to ask him.

We are celebrating 20 Years of World Games of Mountainbiking. What were the most defining moments for you?

The most defining moments! The World Games have been taking place for 20 years now. At the first World Games, I was rated as the favourite due to my overall results in other marathons. Three days before the race I had a bad fall and participated in the competition with a massive bruise on my thigh. For a full 5 hours, I suffered until I reached the 80 km goal. Eighth place was not what I envisaged, but I was merely happy to have reached the finish line.
That is a rule that still applies today: To reach the goal of completing the distance is exceptionally emotional. Only those who have participated in the competition can understand this emotion. The first gold with a victory of over 40 km in one day is a memory I will not forget. To experience that high, even after a bungled season – the experience of hearing the national anthem being played in your honour – a dream!! The first victory in Cross Country – after participating for many years is just as important. The most emotional victories have been those of the last 2 years with the success of Team Penhab. Unfortunately, last year I had to celebrate the win in a hospital bed.

You’ve participated in nearly every race. How many medals are hanging on your wall?

Mmm, how many medals are there? I’m not entirely sure. The five most important are hanging up in a showcase in our Guest House. 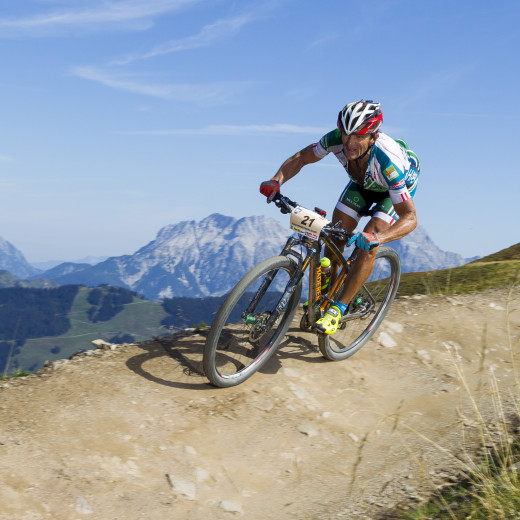 Reini in action at the World Games 2016 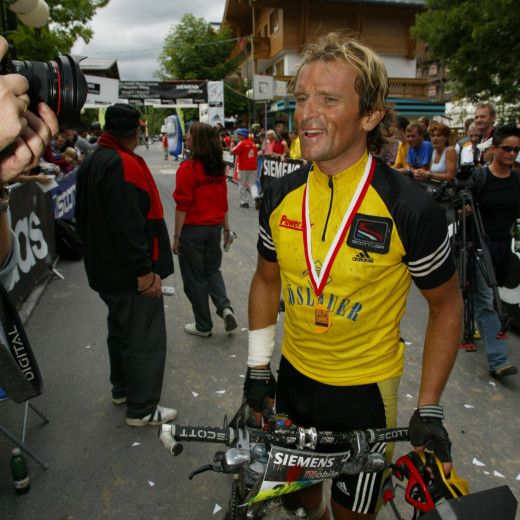 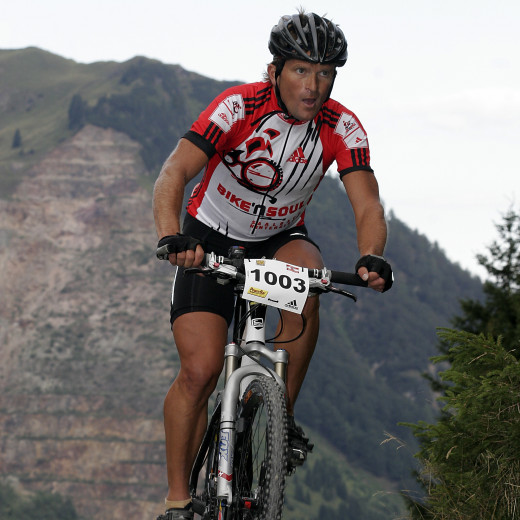 The World Games Marathon has it all. It is a well-known fact that you spontaneously decide which distance you will ride. What is the most significant deciding factor?

Of course, the longest distance with over 80 km and nearly 3,700 metres in altitude which is the most prestigious discipline. Due to the long and steep ascent, everything has to fall into place on race day in order to make it. A great advantage is being able to decide during the race which route you chose. The deciding factor for me is my performance in riding up the Schattberg. It is a tricky ascent, but if successful, it makes sense to tackle the long distance. If things aren’t working out as planned by the time you reach “the wall“ of the Seekar, one can opt for the distance of 58 km. Naturally, tactical decisions are essential, such as chances of winning a medal and the team rating also playing a role.

What are the three crucial stages for you on the marathon route?

One crucial stage is definitely the Schattberg, which is even steeper towards the top, the reward is the view of the Ostgipfel and hopefully many spectators. Then comes the steepest part of the ascent to the Seekar, which if completed, takes every ounce of energy from your thighs. Finally, the relatively flat section, but with hills not to be underestimated lead you down towards the Talschluss. This is where I usually struggle with cramp. 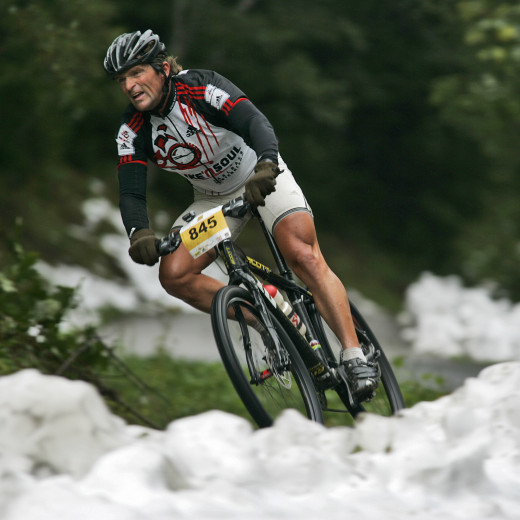 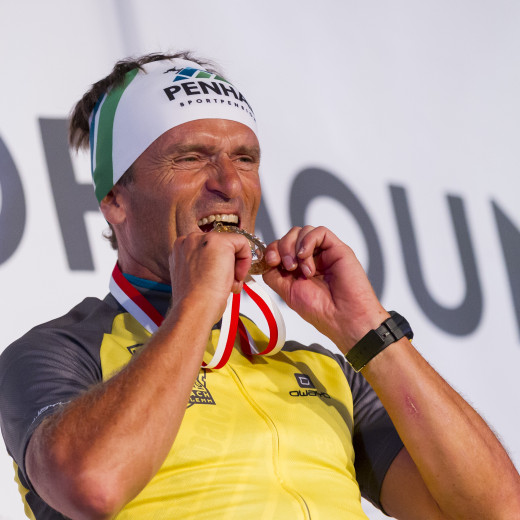 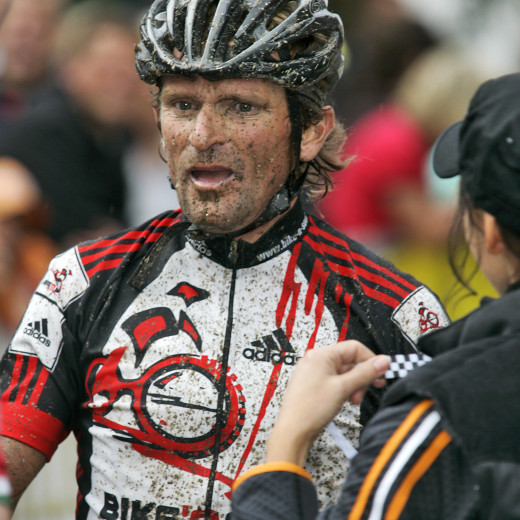 Keyword tunnel vision: How much time is left over for enjoying the landscape?

Naturally, I know the route like the back of my hand as I am a bike guide and am out riding the trails on a daily basis. Nevertheless, I appreciate the beauty of nature and at times during the marathon enjoy taking in the views as a distraction factor. 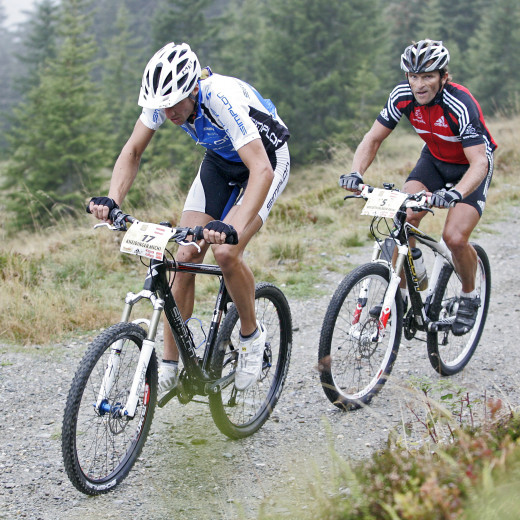 Michi & Reini: When local heroes meet each other on track... 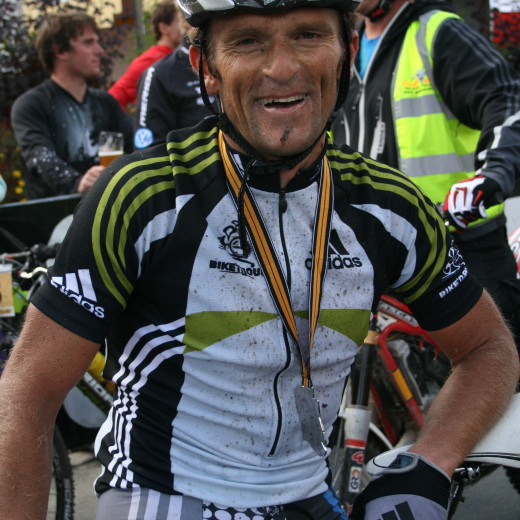 Reini in the finish area back in 2010 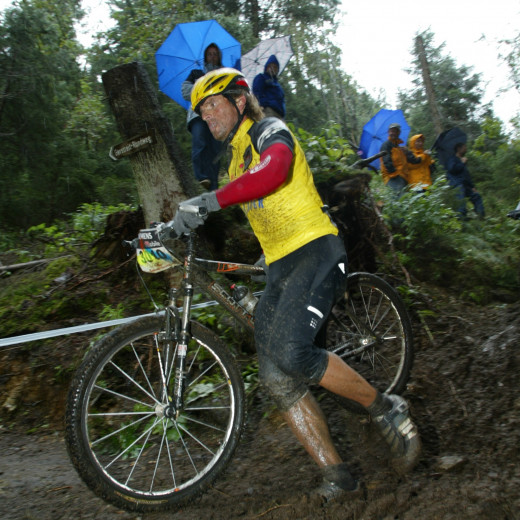 Like almost all other athletes, you have to live with injuries and setbacks. After your serious injury in 2018, what motivated you back to the start line?

I feel blessed that I can once again return to the start line this year!! One day before World Games last year, I had a nasty crash on the Hacklbergtrail, as a result of which I broke 3 of my vertebrae and suffered numerous other injuries. When you experience no feeling in your arms and legs for a period of time and listen to the doctors telling you that such breaks frequently result with the patient sitting in a wheelchair, you know it’s pretty serious. One thing that I have learnt from previous injuries is that you have to think positively and ensure that you get the body back on track as soon as possible. Sport, especially biking helped me to get back on my feet again very quickly, and I am so grateful to have been given a chance to continue with the sports I love so much.

What is your goal for the 20th World Games Marathon?

As I said previously, it’s a blessing after my injury to return to the starting line. Naturally, a medal would be nice, but the crowning glory would be if we were able to defend our title in the team evaluation as Team Penhab. I would like to take this opportunity to wish all participants good luck in their races. And most importantly: You are not allowed to overtake the guide! ;-)

Peter Kaiser about the GlemmRide