Love stories from the Home of Lässig

Love at first sight! It’s not a myth, as you’ll find out if you ask a few passionate Skicircus fans about their first time in Saalbach Hinterglemm Leogang Fieberbrunn. “Just arrived and already in love” is how many of them describe their first contact with the holiday destination. But what about true love between two people? Does a holiday make the attraction between two lovebirds even more intense? And does being on top a tall summit with an incredible view make the process of proposing any easier? We’ve gotten in touch with some of our most loyal followers on Facebook and Instagram to find out.

The two North Rhine-Westphalians met at a carnival party in 2004. That same year, their first shared love holiday took them to the Skicircus Saalbach Hinterglemm Leogang Fieberbrunn for New Year’s. Six years later, it was Jessica who proposed — with a ring hidden inside a dessert at the end of a surprise dinner, followed by a surprise engagement party. Today, the married couple has three children who, of course, join them on the holidays in the Home of Lässig. There, the kids would learn how to ski or the whole family would visit the Tree-Top Trail at the end of the valley for some wintry walks. Last summer, they went to Saalbach Hinterglemm to spend their summer holidays there for the very first time. “Hiking and mushroom picking was a real highlight for the children. I even went downhill mountain biking with my son Florian, the oldest. We had so much fun that we’re already planning our next holiday here. This summer, we’re planning an unforgettable sunrise hike in the Home of Lässig,” says Patrick. 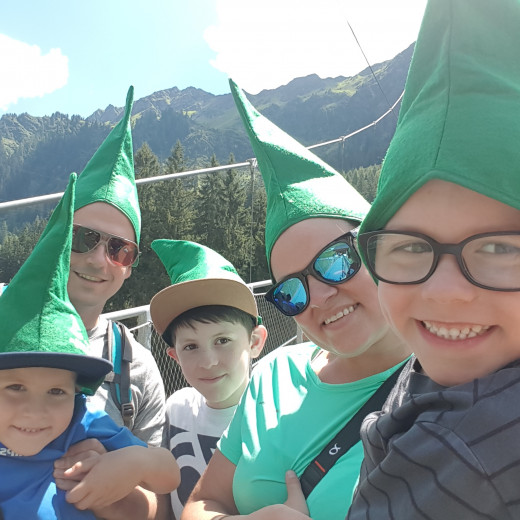 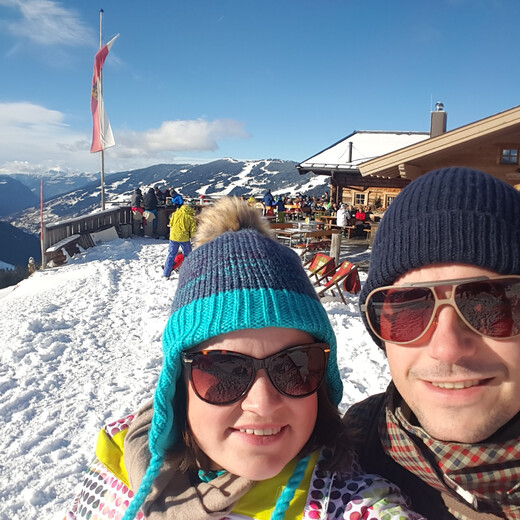 Winterholiday in Home of Lässig 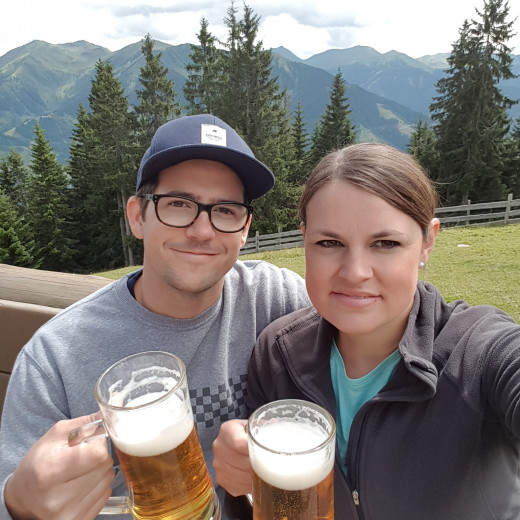 Patrick and Jessica are true Saalbach-Fans

Vanessa & Chris: A wedding to remember

“Our love story began at my friend’s wedding in 2009. I had known Chris, the bride’s brother, for ages, but suddenly the sparks flew,” explains Vanessa. The next summer, the couple joined the two newlyweds on a trip to Saalbach, where it was especially the Freeride Festival that attracted the guys, who are avid biking fans. Vanessa reports: “We liked it so much that we knew we’d have to come back another time. And that’s what we did for the summer of 2011 when I was pregnant with a massive belly and spent a lot of time relaxing on the SonnAlm mountain pasture while Chris hit the trails. I felt totally at ease on the mountain pasture together with Christoph and Manuela. Our little daughter Frida joined us in the summer of 2012 when we drove up the Schattberg mountain and took a break on the mountainside just under the station. We were enjoying the view when Chris suddenly pulled a ring out of his pocket and proposed to me 2,000 metres up high. We knew that we wanted to get married in Saalbach Hinterglemm, especially on the SonnAlm mountain pasture and under the blue sky. All it took was a bit of persuasion and in the summer of 2013, the entire wedding party and the registrar came together in our favourite hut. Unfortunately, the weather had different plans and the rain ended up ruining our initial wedding plans. But then we quickly moved the wedding ceremony over to the SonnAlm mountain pasture’s bar and all was good for a while. But it started raining so much that countless floods ended up cutting off the entire Pinzgau region. We were also trapped in the Glemmtal valley for two days as a result of the mudslides. And so, we ended up with an involuntary holiday extension for the entire wedding party. At our accommodation, Hotel Thurnerhof, it felt like we were on a class trip because our group was the only one left. We went for walks, played ping pong and partied — and decided to make the best of our involuntary holiday. To this day, we talk about our unforgettable wedding in Saalbach Hinterglemm. And this year, we’re celebrating our fifth wedding anniversary at Hotel Thurnerhof. It’s never boring with our family and the two dogs also have to tag along every time.” 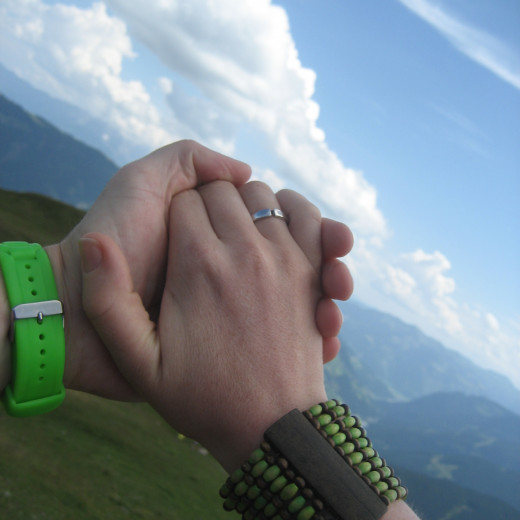 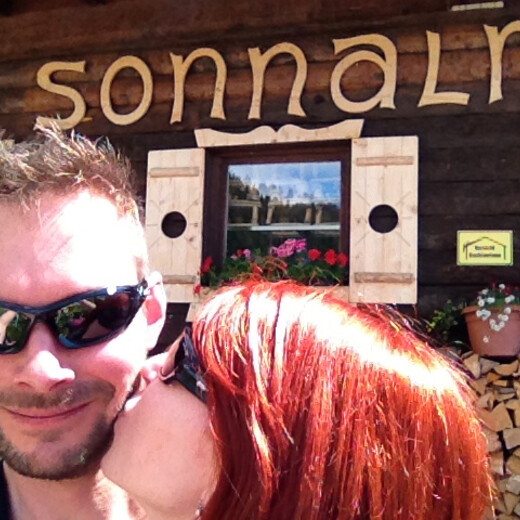 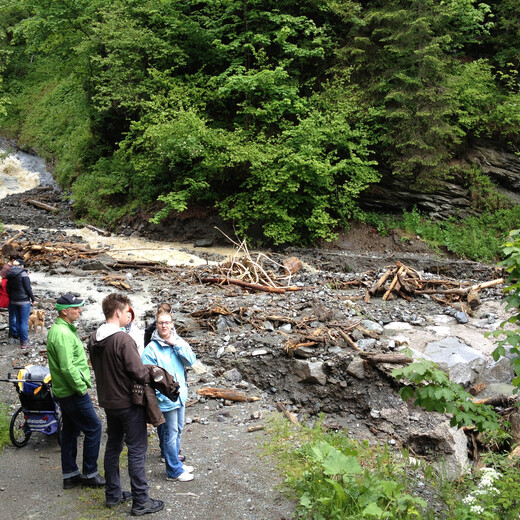 It was already their sixth time when Alan and Eva from Ireland came to the Skicircus Saalbach Hinterglemm Leogang Fieberbrunn in January 2018. After a lot of planning, the clock started ticking for Alan on 24 January, because he was about to make his proposal. To find the perfect spot for that magical question, he took his Eva high up with the Schönleiten Cable Car. He recounts: “It was a beautiful, sunny day with crystal-clear visibility. We had gone skiing with friends and family and, as planned, I faked a fall to catch Eva’s attention. Not knowing a thing, she rushed over to me to help me up when I suddenly took out the ring proposed to her. Our friends had been informed in advance and filmed and photographed the whole thing. Of course, she said yes! We don’t have a wedding date yet — but who knows, maybe we’ll even get married in Saalbach Hinterglemm!” 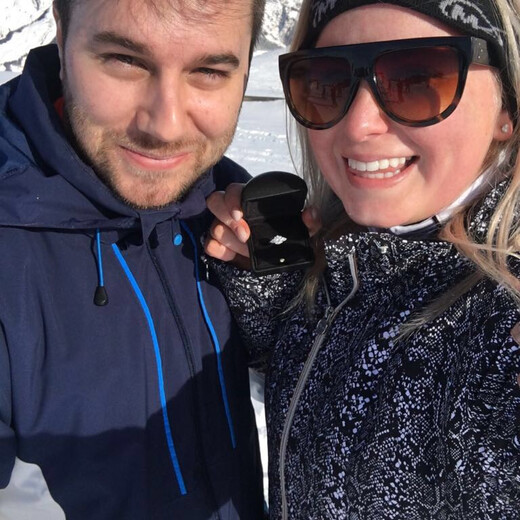 The newly engaged on Schönleiten 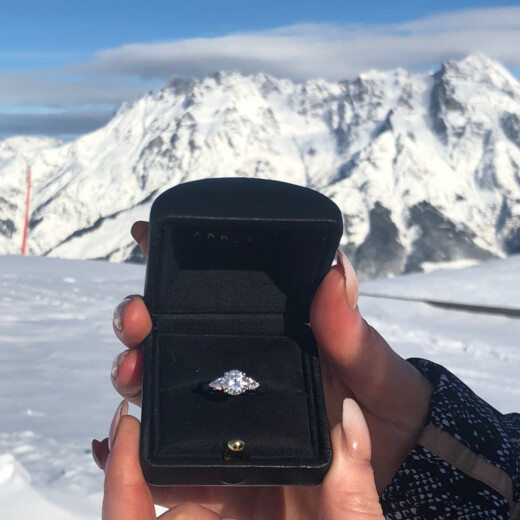 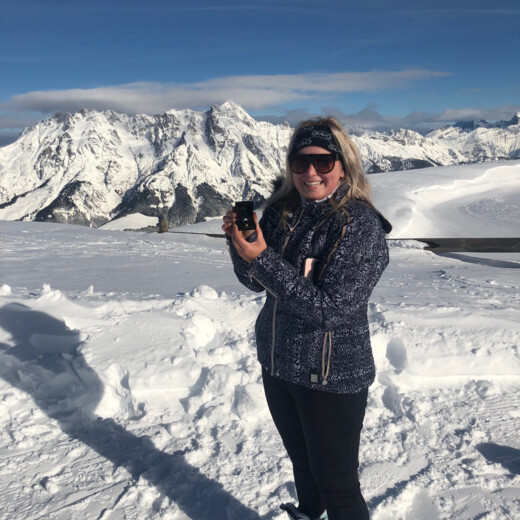