PUMP IT UP - The focus on reservoirs

What role does modern snowmaking technology play for nature and skiing?

For decades, one spoke of "artificial snow" when one meant mechanically produced snow. But there is nothing artificial about the white stuff end product. However, a certain amount of art, a wealth of technical know-how and a little magic are required to turn water into perfect pistes. The majority of this water comes from our reservoirs. In this story we take a look behind the scenes of modern snowmaking.

It's the mix that matters!

The requirements of modern skiers concerning the piste quality in our ski area have changed fundamentally over the last 30 years. Many factors play a role in the creation of the "perfect piste". The ideal basis is a balanced mixture of natural and artificial snow to achieve perfect results in terms of preparation, durability and skiing experience. Due to the different grain sizes, the compact machine snow compensates for the deficiencies of natural snow, while the airy structure of the natural snow crystals provides the necessary lightness. 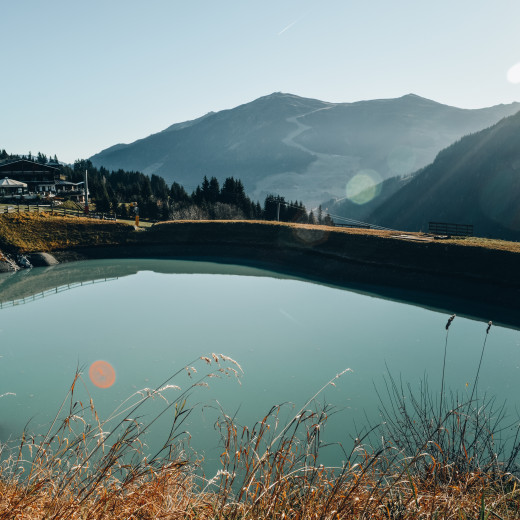 The first reservoir of the resort - built in 1992 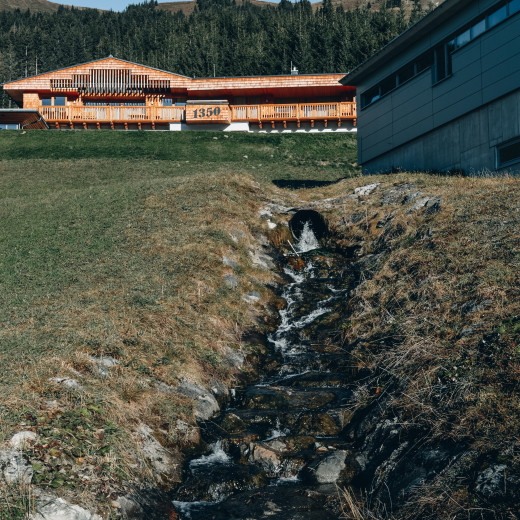 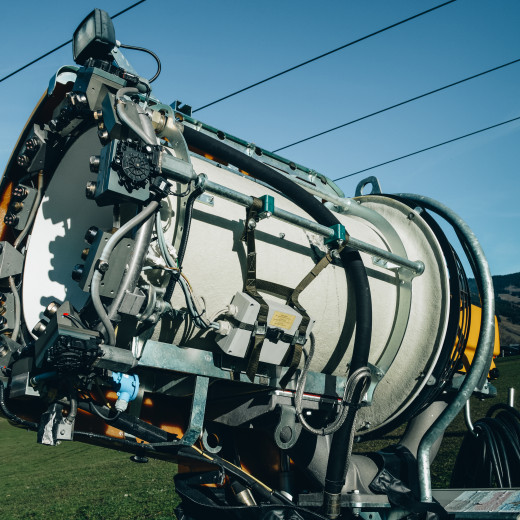 Inside a snow machine

The water supply for the snow machines is provided by pumping systems and pressure pipes. Wherever possible, gravity is used in an energy-efficient manner to develop the necessary pressure. However, before the water reaches the snowmaker, it is stored in one of the numerous reservoirs in the ski area. After the winter, a large part of the snow is fed back into the reservoirs in the form of meltwater. Thus yesterday's snow fills the reservoir for tomorrow's snow. The cycle begins over again and the water is returned to the reservoir in a controlled manner.

The role of reservoirs as flood protection

The reservoirs also play an important role in flood protection. On the one hand, drainage systems located along the pistes drain water from the slopes into the reservoirs, which prevents the soaking of the soil and thus reduces the risk of landslides.

On the other hand, the reservoirs act as buffer zones. If heavy rain falls within a short period of time - for example during storms during the summer - all of the water that accumulates on a mountain would flow rapidly downhill. This can lead to water sources such as the river Saalach reaching their absorption limits very quickly and, in the worst case, to flooding. Reservoirs counteract this by taking up some of the water, holding it on the mountain and then letting it flow off in a regulated manner - controlled by weirs. 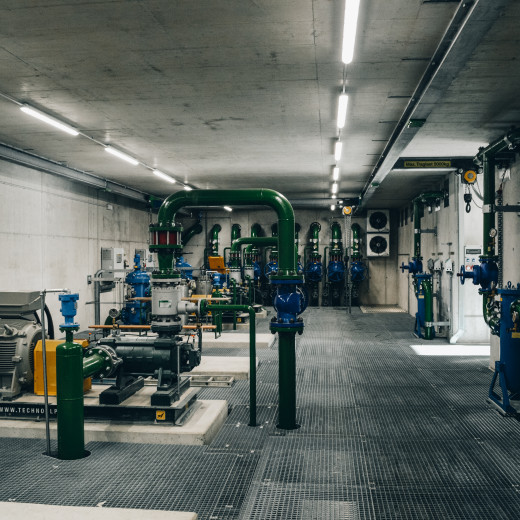 The pumping station of the Hochalm reservoir 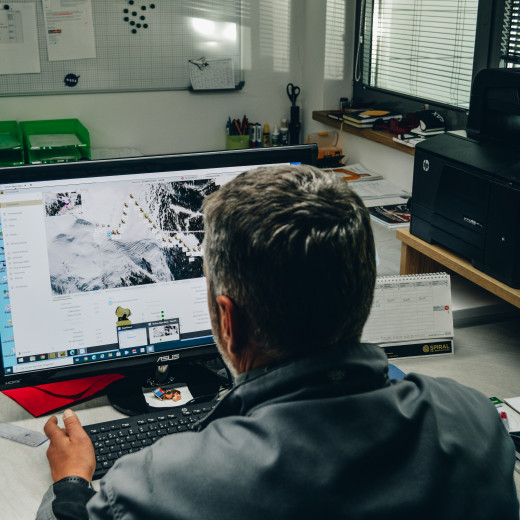 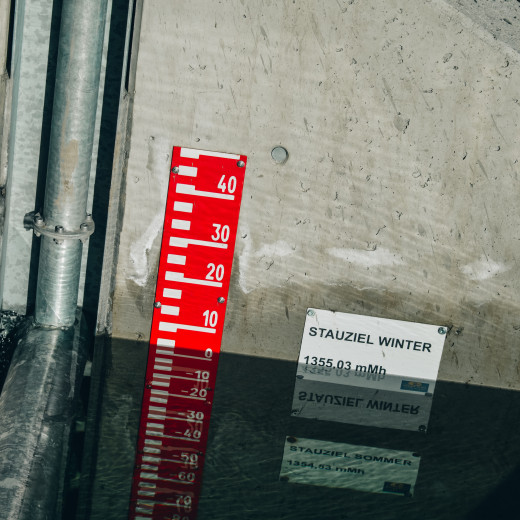 And the ecological aspect?

There is no question that the reservoirs created and the entire infrastructure such as pumping stations, pipelines and snow generators represent an encroachment on nature. Everyone who works in this field and plans and implements projects is aware of this. It is in our own interest to keep nature intact and to minimise the impact of tourist infrastructure. Ultimately, we ourselves live in, from and with our environment and it is our quality of life that is at stake.

Before a groundbreaking ceremony can even take place, a multi-layered process has to be passed through. Besides the elaborate planning with geological and water law aspects, environmental compatibility plays a major role here. Independent bodies such as the Salzburg Environmental Advocate play a key role and assess any effects on the local flora and fauna. If plants or animals worthy of protection are restricted or even threatened in their habitat by the planned project, the matter is off the table.

If there is nothing standing in the way of the project, special attention is paid during construction to creating a balance of give and take. For example, shallow water areas will be created in the reservoirs, which serve as habitats for amphibians and insects. Already in the planning stage, great importance is attached to ensuring that the reservoirs blend into the landscape as harmoniously as possible. An important issue: the topsoil and vegetation are carefully removed and then replaced within a very short time. The "Wasen" (roughly speaking, giant grass tiles) can thus be relocated together with the plants. This approach ensures an immediate renaturation of the built-up areas, thus restoring the habitat for amphibians, birds and small animals as quickly as possible. 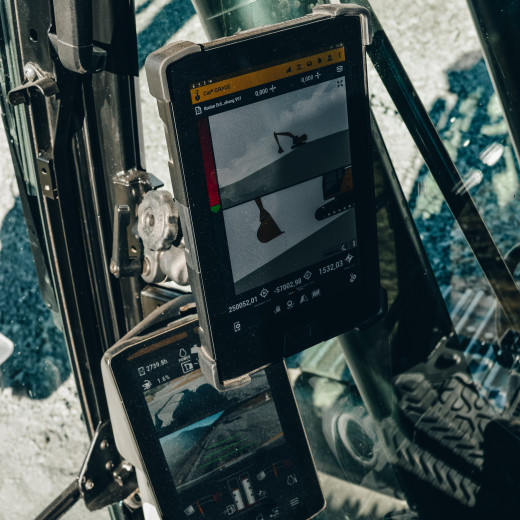 Inside the dredger: 3D plan and GPS support 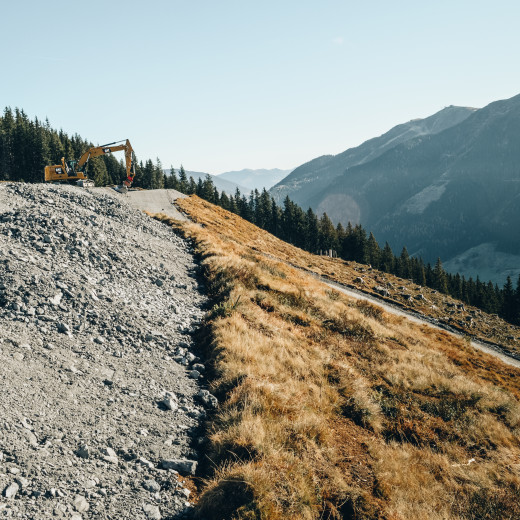 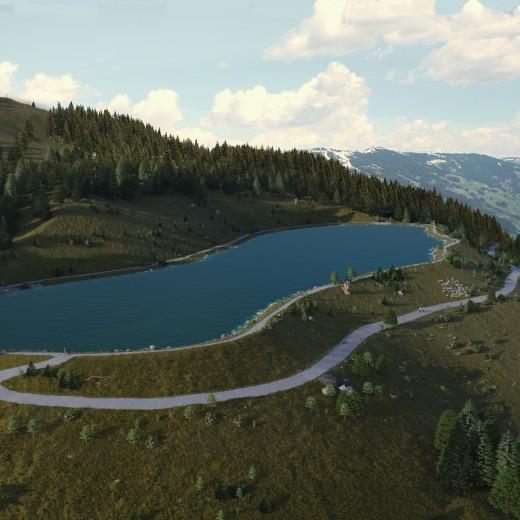 Visualisation of the new Rosswald reservoir

A huge project with short distances on the Reiterkogel

High above Hinterglemm, the new Rosswald reservoir is currently being built over a two-year construction period. The dam on the valley side is being built exclusively with rock material which is being mined at the mountain side and crushed on site. The already mentioned "Wasen" (grass tiles) are also simply moved 100 m as the crow flies in this area and cover the outside of the dam with greenery "in real time". Thus, the distances are short and hardly any material for the dam construction has to be transported from the valley to the mountain.

The new Rosswald reservoir will be used as an all-year storage facility to cover the annual water requirements of the snow-making facility on the Reiterkogel. Several diverse replacement and compensation measures are being implemented in the landscape ecological design. For example, a 200 m² large, near-natural pond (Himmelsteich) will be constructed as a new habitat for water-dwelling animals and plants.

Data and facts about the new Rosswald reservoir