The familiar sound of "cuckoo-cuckoo" in spring is followed by a deep sounding "Roaaararararroar" at the beginning of June. The dark sound of thick exhaust pipes, sees a knowing smile appear on the faces of the locals of the Glemm valley: "summer cannot be too far away - the bikers are returning to the valley! Come over and check out the Harleys”

For more than two decades, the humming sounds of the Harleys has led to a sudden awakening from the interim season at the beginning of June, transforming Hinterglemm into a pulsating Harleyglemm. Up to 8,000 highly polished machines rock up for “Biker Mania” and on a daily basis, 10.000 visitors populate the party mile of this legendary bike festival. Visitors come from as far afield as the USA, Australia and Dubai, with some shipping their machines to this event. Those who think that Harley meetings are only for hard-core motorcycle freaks should think again. With free admission, visitors of varying ages flock to this event to marvel at the chrome polished machines, enjoy a drink and visit the marquee and chill out to the rocking sounds of live bands as well as try their luck at the raffle, with the main prize being a custom bike from the German manufacturer, Fred Kodlin, a raffle that transforms a surprised visitor of today, into a proud Harley rider of tomorrow. 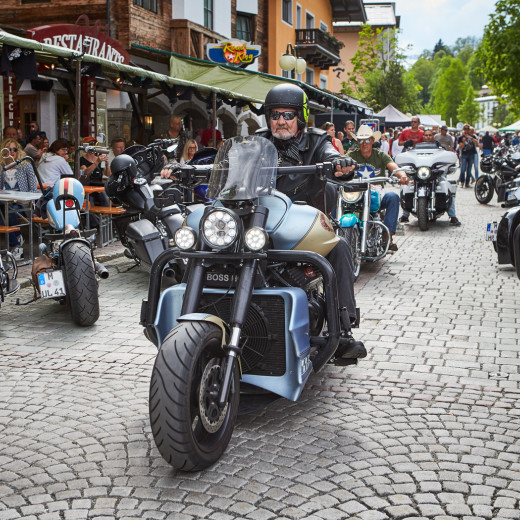 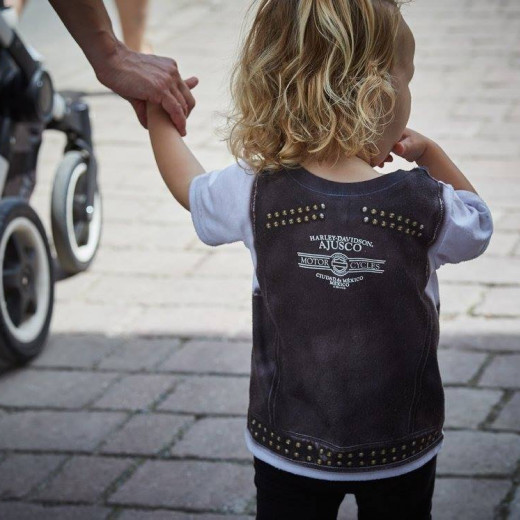 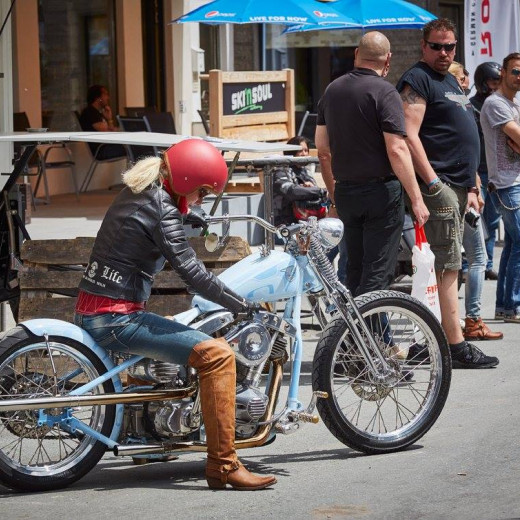 The Harley-Davidson is more than just a motorcycle – it’s a way of life! A stern poker face is just as much a part of the style as the black leather, black-orange shirts and biker boots. But this cool outlaw image also plays a role in the Harley-Davidson lifestyle. For a long weekend from 8th to 11th June 2017, Saalbach Hinterglemm will be transformed into a hotspot of the biker scene for the 21st time. This event has long been a benchmark for all Harley fans and after more than 20 years it feels like one big happy family gathering for many participants. The idea of Biker Mania came about on a winter evening in 1996", explains Florian Breitfuss-Wolf, who is now the director of the festival. It was his father, Thomas Wolf, who at that time was sitting together with members of the Vienna Chapter in the newly built "Road King" bar - the "Harleybar". At this cosy social gathering, the concept of the first Harley meeting emerged. 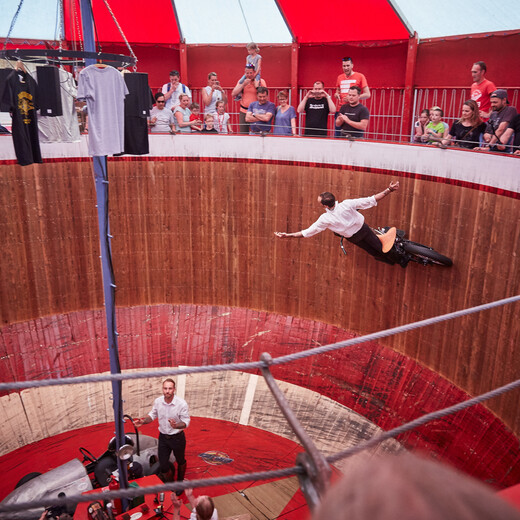 Action in the Wall 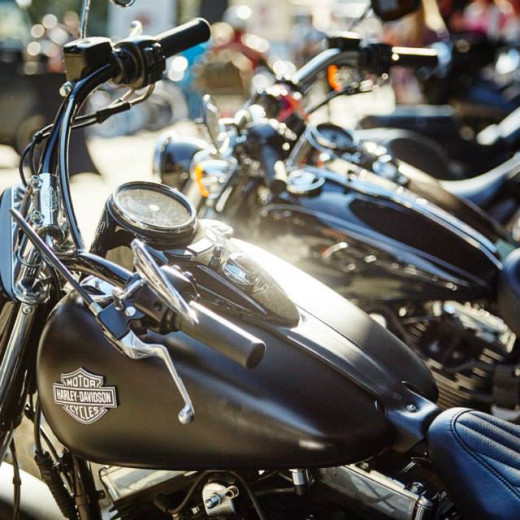 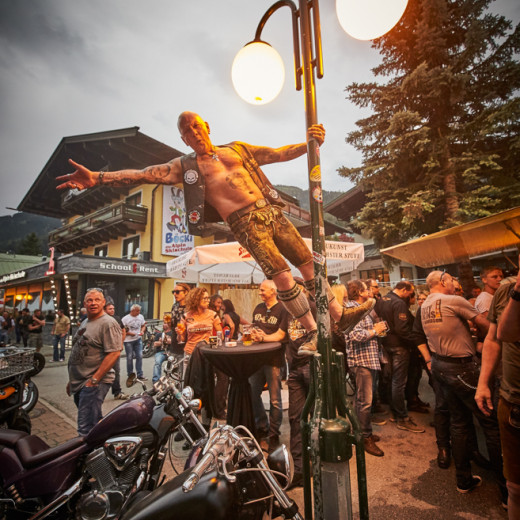 Live Musik in the festival venue

Florian Wolf-Breifuß was only 16 years old at the time of the first meeting in summer 1996 and remembers “I worked as a waiter in the marquee on the weekend and was really impressed by the number of cool people, who were celebrating together in a friendly and peaceful manner. It was overwhelming just how many visitors and bikers attended the first meeting – since 1996, the event has become somewhat larger, with around 1.200 bikers gathering in the Glemm valley for the meeting. However, the original flair and spirit of the event, as well as the passion and comradery is today the same as it was in the first year. As well as the feeling of familiarity, quality is important to us. Our offer is pure quality – from accommodation to the dishes on offer in the marquee”.

Seven years ago, Florian, who is naturally himself an enthusiastic Harley driver, took over the organisation of the event from his father and together with his family – wife Manuela, father Thomas, mother Christl (Hotel Glemmtalerhof) and brother Jörg, Hermann and Heribert rock on at this annual event. “Tanja Miksch and Reini Windisch have also been part of the organisation since the beginning, and in total around 100 people are part of the team that help out with preparation in the run up to the event – once things are up and running and the guests are celebrating, I can relax and greet longtime friends along the one kilometre long biker village, and there are many of them.” laughs the 37-year-old. 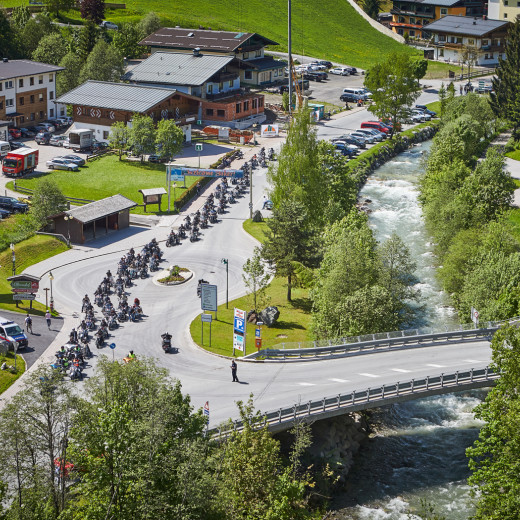 The big parade on Saturday 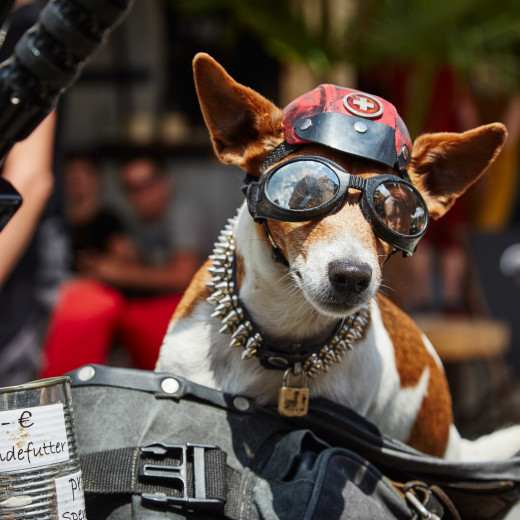 A four-legged frequenter at the Biker Mania 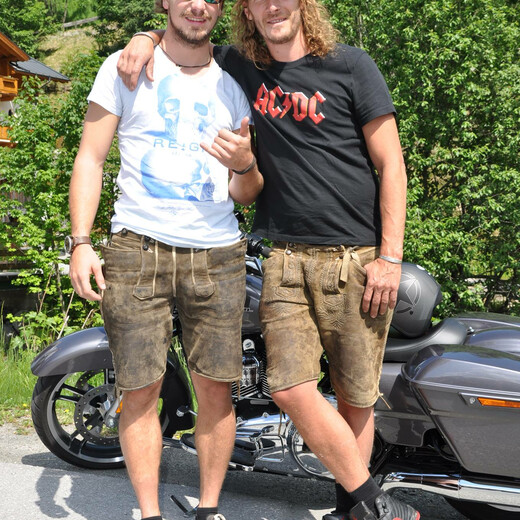 Florian Breitfuß-Wolf (right side) with his brother Heribert.

Harley-Spirit in the center of Hinterglemm

When I ask Florian what his personal Biker Mania highlights are, he promptly answers „The legendary parade which takes place on Saturday, where the bikers gather together and ride out of the valley in a convoy – this year they will ride over the Gasteiner Alpenstraße to Sportgastein. As the bikers ride out of the village, spectators line the streets and look on in wonder. For a pure adrenaline rush, it’s great fun joining the spectators at the “Motodrom” – where stuntmen entertain the audience by riding up steep walls, but I’m also looking forward to the AC/DC cover band on Saturday night. The band will perform in the marquee and go all out to provide a really crazy stage show”.

There are also many other highlights for participants and visitors on the programme, such as helicopter flights, bike awards, guided excursions, poker tournaments. This year, once again, the roar of engines herald the start of Biker Mania. Come on over and check out the Harleys”!

A genius on wheels