Music Made in Saalbach Hinterglemm

Covering the Glemm valley music scene, an assortment of music from the rhythmns of rock, jazzy beats and punk accompanied by lyrics that are guaranteed to get you on your feet and singing along. The Glemmer band scene is varied “The lässigen 3” or “The lässigen 3 +1”, as one of the musicians makes up not one, but two of the bands. We asked a representative from each of the four coolest bands in Saalbach Hinterglemm to grant us an interview.

The four-piece dialect band from Saalbach Hinterglemm were founded in 2009 as a solo project by Stefan Schipflinger. Since 2012, Happy Hoagascht has appeared as a 4-man band. They write their own music, with humorous lyrics full of gusto. In the "My Stage" band contest at the Spielberg Musikfestival, they played as one of the top 12 bands last year with their song "Schmus ma amoi”.

Stefan, which role do you play in the band?
I am the song writer – responsible for guitar, vocals and management. I guess I am the ‘Daddy’ figure of the band.

Where can the readers of Saalbach Stories watch you perform live?
You will find actual gig info on our homepage.

Do you write all your own songs?
Yes, all of our songs are originals and composed and arranged by ourselves, mostly up on the Zirmkogel summit where we seek inspiration!

Is there an audio sample online?
But of course – for example „Engelbert Strauss“ or „Schmus ma moi?“ or „Pofesn“

Where & with whom would you like to be on stage?
Hmm, I have to think about that. Mario would say, with "Slayer" in "924 Gilman Street - California", Ludwig probably "Tame Impala" at the "Oxford Hotel - Sydney", Flo probably at the "Guca Festival in Serbia" with all the artists who would perform there and I would say With "Bob Dylan" at the legendary "Gaslight Cafe in New York".

Is there a song title from your repertoire which has a special place in your heart?
„The legendary Baufirmenschmusa from 2009“ – because we have played the song at every performance since the beginning.

How do you feel at the start of a performance?
I am always thinking will everything be ok with the guitars, and that hopefully none of us will forget the lyrics and that after the performance no-one comments that we are perfect casting show candidates.

A little anecdote from your musical career:
We once played a concert at „Cafe Carina“ in Vienna. Towards the end of the performance, a gentleman came into the café to use the toilet (we didn’t notice this at the time). The next day we were playing at the “Shakespeare” in Salzburg and after the concert, the gentleman and his girlfriend approached us and informed us that they had especially travelled from Vienna to Salzburg to watch our concert. Apparently, whilst in the café toilet the previous day, he liked our last songs so much that he wanted to experience a whole concert. Of course we were extremely flattered.

The future plans of Happy Hoagascht?
As each year passes and we become older, our interests and lives vary (friends, family, work, etc.), but we would like to continue making music in the hope that people will attend our concerts in the future as well. Perhaps we can motivate youngsters (especially in the Glemm valley) to form a band of their own and that in the future Austria's radio stations will promote and play local music more often. Especially dialect. This is something everyone understands!

Tobi, how did the band CANTONA form in 2010?
We found each other through our similar taste in music. After a few funny nights together, the band hatched. We were extremely motivated at the time and often performed back to back for four or five days in a row.

What has been your most legendary performance?
That was in August 2013 in the Salzburg Rockhouse with "The Flatliners" and "Face to Face".

Where can one listen to your music?
We haven’t performed as Cantona for quite a while in the Glemm valley, as for the majority of our guests, the music of our counter band, “Left Hand Right” is more compatible. ;) At present Cantona are taking a break.

You are a guitarist, singer and songwriter - do you write all the songs yourself?
Yes, all songs are written by ourselves. Meanwhile, there are three albums, which you can listen to on our homepage. An audio sample is available under: https://www.youtube.com/watch?v=t_wl9cUPcqU

Can you name one of your songs which is especially close to your heart?
That would have to be the song "Trade". The lyrics were very much influenced by Roland Emmerich's film of the same name. The emotions are also reflected in the song. It's a very powerful song that we are still performing.

Your favourite performance location the Glemm Valley:
The „Lake of Charity” summer event!

How do you feel the moment when the stage lights go on?
Mostly stressed, as we are only prepared at the very last minute. In this instance, the three of us are equally chaotic, but after a beer or two we are ready to go and once the amplifier is switched on, it is only the music that counts!

Cantona - Punkrock at its best

The guys from „Left Hand Right“ don’t take themselves too seriously and in turn the interview is accompanied by a lot of winking! When playing live, Manni Bacher, Tobi Riedlsperger and Christoph Miller create a perfect atmosphere with pulsating rock beats to get everyone into the party spirit.

Manni, which role do you play in the band?
Cajon (box drum), percussion, vocals & comedian

How did the band get together?
We met at a Tupperware party of Miller's Mum. The result of our mutual love of unicorn costumes, Rock’n Roll and many of our jokes being a little below the belt, was us being the last 3 remaining people at the Tupperware party. We played for a long time under the band name of ‘Cantona’, but are today known as “Left Hand Right”.

Where can the readers of Saalbach Stories watch you perform live?
Mainly at the Harley Bar and at almost all major events. Oh, and of course at Tupperware parties. :)

Do you also write your own songs?
Basically yes – but unfortunately no-one can play them.

Is there an audio sample online?
Yes, you can listen to one of our songs here.

Your favourite performance location the Glemm Valley?
The Harley Bar

Words of wisdom from a musician:
Beer before wine, you’ll feel fine! Musicians should not always take themselves too seriously and also learn the art of laughing at themselves. 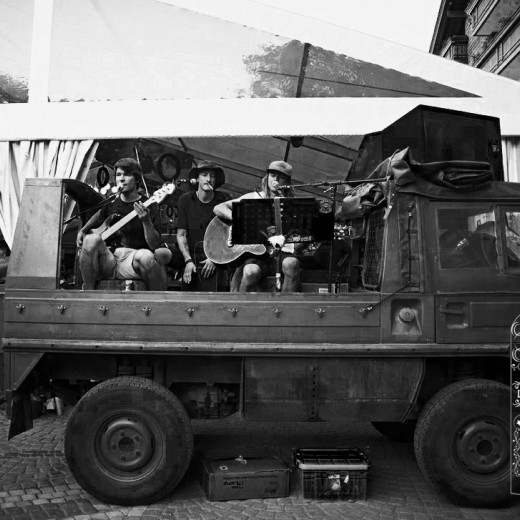 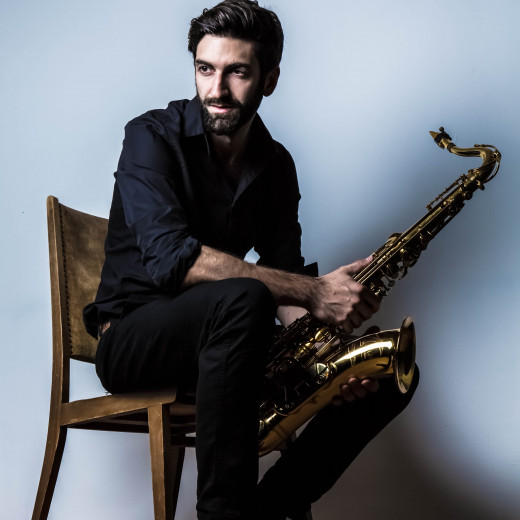 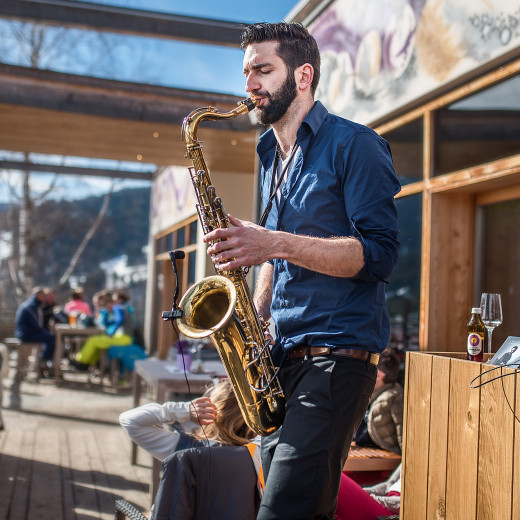 So to say, as a bonus track of this article, we would like to tell you about the solo project of Happy Hoagascht band member, Florian Schawarzenbach and his jazzy side. The 28 year old started out in as a sax player as “Son of Kurt” in 2015 and aroused his audience with live instrumental sessions of House and Deep-House DJ sounds. Florian is however more than “just” a live saxphonist, he combines his music with live DJ’s and experiments with exotic instruments and sounds, demonstrating that the sax is more than just an instrument to spice up the house music in the charts.

Florian, how did your solo project come about?
In December 2015, I had a booking to perform together with DJ Noel at the “Alpin Juwel” birthday party. Since then, I played at many more gigs in Saalbach and further afield.

Where can our readers watch you perform live in Saalbach Hinterglemm?
The next time will be at Biker Mania in Hinterglemm!

Do you write your own material?
Yes, this year I plan to be more involved with my debut album "REFLECTIONS". A great deal of emphasis is placed on authenticity and personal style.

Is there a song title from your repertoire that is especially close to your heart?
„We Will Be Shining“ (see video). That is the last „Pop“ production, I made with the wonderful Raffaella della Gemma on vocals. For the video, I organised a casting for a pair of dancers, the best of which can be found on the video!

Is where you live an inspiration to your music?
Peace and clarity in nature are great inspiration factors for me.

Future plans:
Since there is currently a huge demand for live instrumentals and DJ's in the Pinzgau region and beyond, and I am unable to take on so many concerts. As of the forthcoming winter there will be the "The New Live Collective". These are live musicians on various instruments, together we will rock the Glemm valley!