A hike with the family up to the Tristkogel

Perhaps not well-known as a conventional family hike, but certainly for those who are relatively fit and surefooted, this hike to the Tristkogel at a height of 2,095 m is a great experience for the whole family.

“How much further is it”? OK– it was obvious this question was going was going to be asked at some point, but really after 10 minutes? We keep calm and gently motivate the young co-hikers with a little tickle, an art on a level with that of a lion tamer.

It’s just before 09:00 o’clock when we park the car at the Talschluss and start our tour. We are not in a rush and the temperature is comfortable and the forecast is stable for our planned ascent around noon. The target – the Tristkogel, which is in our sight as we amble towards the Lindlingalm and follow the forest path to the Ossmannalm, where some curious goats welcome us. 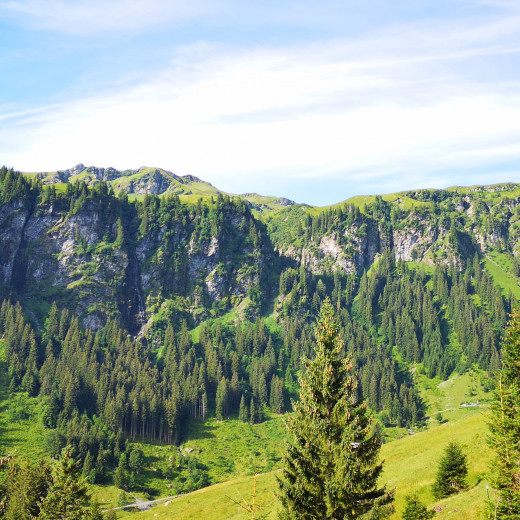 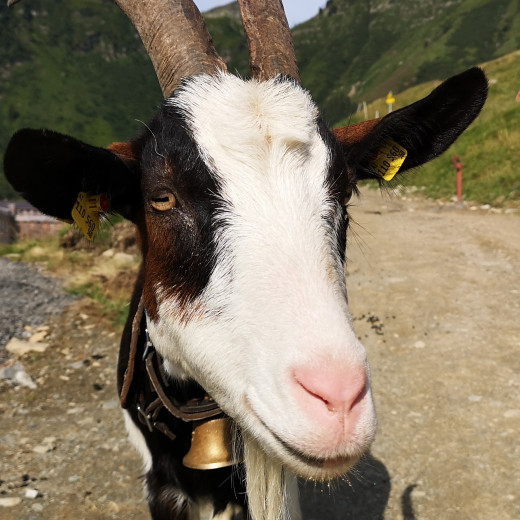 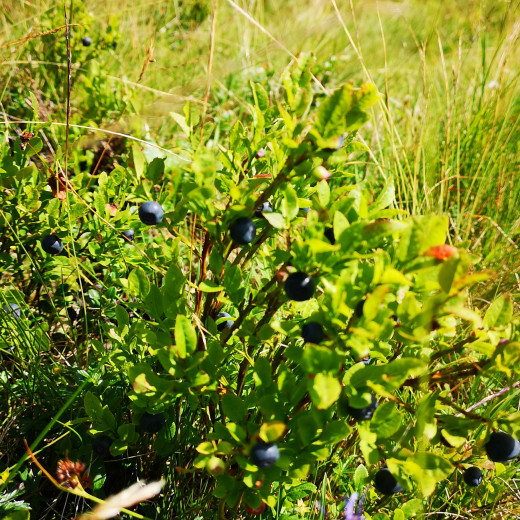 Blueberries along the way

Approximately 20 minutes after the Ossmannalm you reach the Mittersaal. Here the path becomes steeper and more exciting and we all feel the childlike urge for discovery. No-one has complained for a good half an hour, instead we observe interesting plants along our way and listen to the whistles of marmots in the distance whilst discussing is it best to walk with or without the aid of our hiking poles.

At the halfway point between the Mitter- and Hochsaal we take time to pluck some blueberries and motivation levels are at the highest. We give the berries a quick wash and they are eaten on the spot. Our tip: Take a small storage container in your rucksack to safely take your harvest of berries back home.

Once you have reached the Hochsaal area you will already be able to see he summit cross of the Tristkogel. The walking time from this point is around 1 hour and 15 minutes. Halfway point = snack time. The views are impressive, one side to the Staffkogel and the other the towering Geißstein.

In the area of the Hochsaal, the Saalach river rises, which eventually merges with the Salzach river around 105 kilometres further near Salzburg. 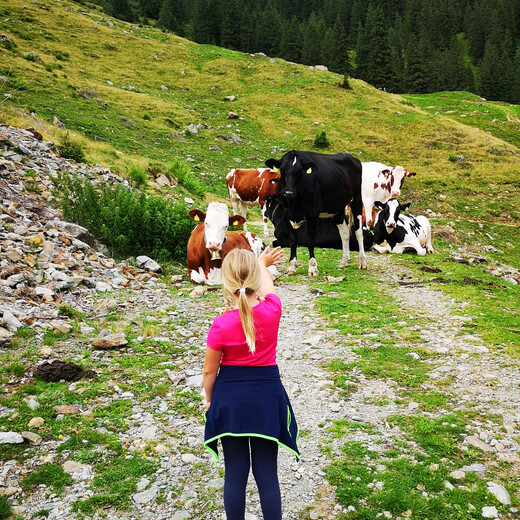 Thanks for the safe passage! 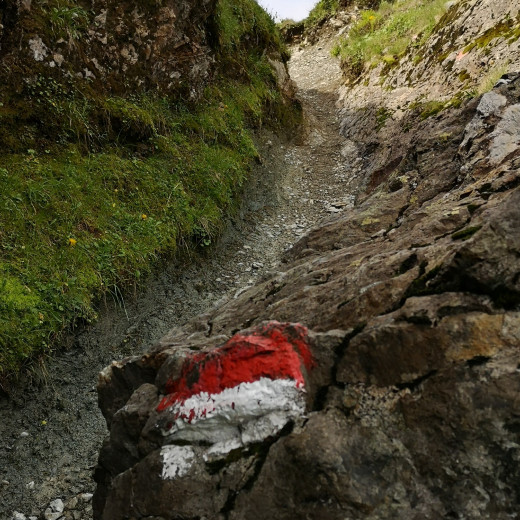 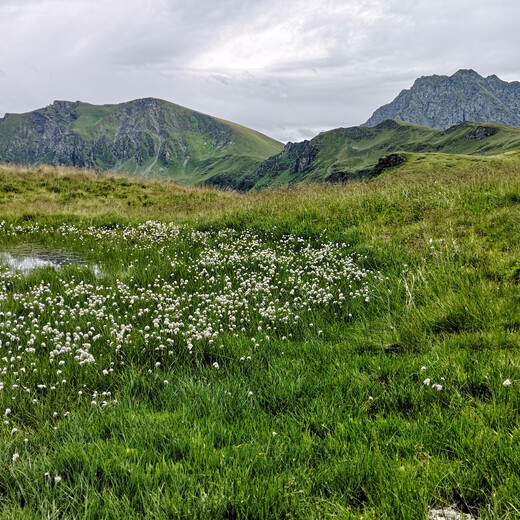 Freshened up and highly motivated, the tour continues from the Hochsaal towards the Saaljoch, where one crosses the border between Salzburg and Tyrol. Along the trail you will find small swamps, fields of cotton grass and lush Alpine meadows. Cows and horses aren’t upset by hikers and families and continue to graze at leisure.

Driectly after the Saaljoch, the path branches off to the left and leads along a mountain ridge behind the Tristkogel suumit. Here you have to decide between a direct descent and a normal route to the summit. The direct ascent is steep, narrow and partially exposed meaning only those who are surefooted should attempt it. The normal route is twice as long and takes you around the back of the mountain towards the summit and is the much easier option.

As 85% of the @saalbach_com Instagram Community voted for the short route in a spontaneous survey in the Stories, but mostly due to the fact we trust our children can climb the direct route, it is the one we choose. After only a few metres, the path winds steeply towards the summit. High steps, some unstable terrain along with grass slopes to the left and right prove that the “surefootedness required” sign wasn’t put up for nothing. With a burst of concentration we hike the last metres and congratulate each other when we conquer the summit.

The children swiftly forget their efforts as they touch the striking summit cross of the Tristkogel and enter their names in the summit book. The summit plateau isrelatively small and exposed, so caution is advised and for safety reasons, romping around is a No Go.

By the way, thanks to our forefathers and long before the digital era, a selfie-friendly summit cross was erected on the Tristkogel. Perfect for selfies on one side and panoramic photos on the other. The engraving of “Tristkogel 2095 m” is readable in all conditions without a mirroring effect ;-) 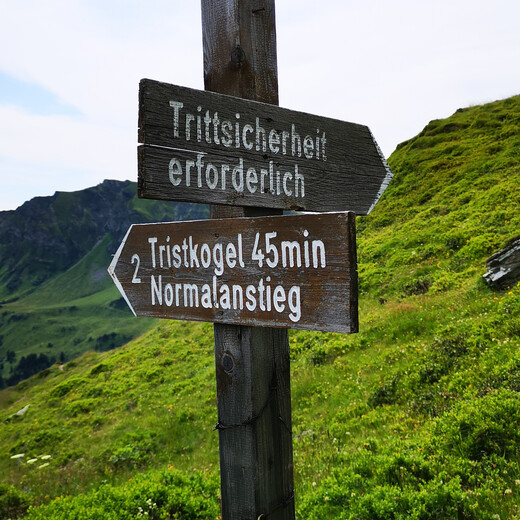 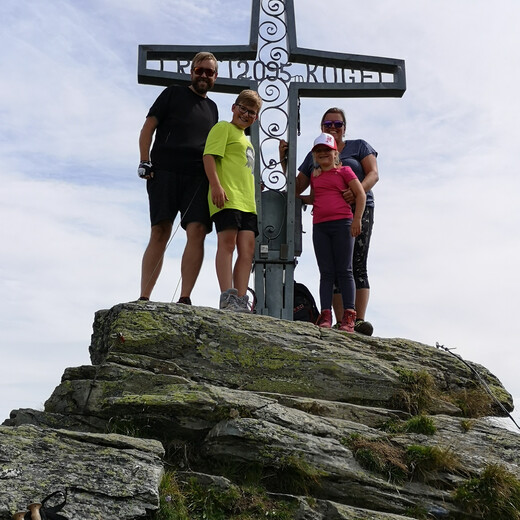 The summit is ours!

Thousands of tadpoles in the Hochtorsee

For our descent we choose the easier route from the back of the Tristkogel, which offers an impressive view of the Gamshag. We take the opportunity to climb a further 25 minutes to the nearby Hochtorsee. This detour should be part of the hike. The lake is a dreamlike, mostly deserted place, where you can refresh tired legs. At the time of our tour (mid-August), there were thousands of tadpoles cavorting on the lake shore, which are of course closely monitored by naturists.

From the Hochtorsee one has the choice between two descents:

Due to uncertain weather conditions, we choose the well-known first route for our ascent and three hours later find ourselves once again in the car park in Lengau.

With children we suggest you allow around 6 hours for the complete tour.

On this hike, you will find various Alpine flowers and blueberry bushes. We were lucky enough to see goats, cows, horses, two marmots and a viper (thankfully in a hurry) along with thousands of tadpoles.

You can also take the noddy train between the car park and Lindlingalm (first outward journey 09:20 h, last return journey at 17:40 h). By doing so you save your legs for around 4 km as well as a couple of metres in altitude.