25 years of Rave on Snow

For 25 years, the electronic music festival has been setting the mountains of the pre-Christmas Glemmtal valley alight. From 13 to 16 December, fans of electronic music will come together again at Saalbach Hinterglemm to dance and party on 10 floors to the tunes of 80 DJs and Live Acsts for three days long.

While elsewhere the candles are flickering festively on the Advent wreath, the techno & house fans have their Christmas party in Saalbach Hinterglemm with a wild party mood and the finest electronic sounds. Saalbach Stories invited ROS co-founder Thomas Kleutgen to an interview and went with him on a journey in time to the beginnings of the festival, finding out about standout moments and extreme weather events in the process 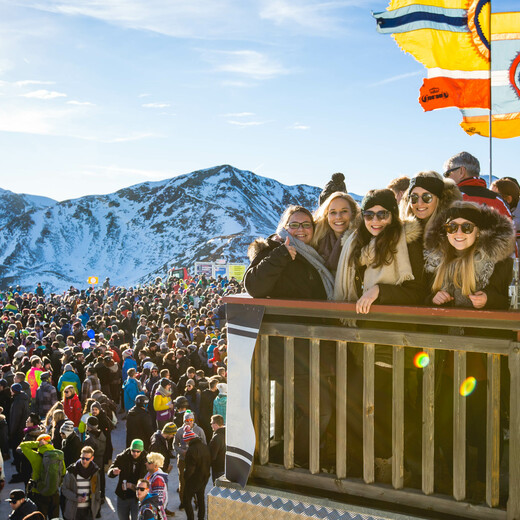 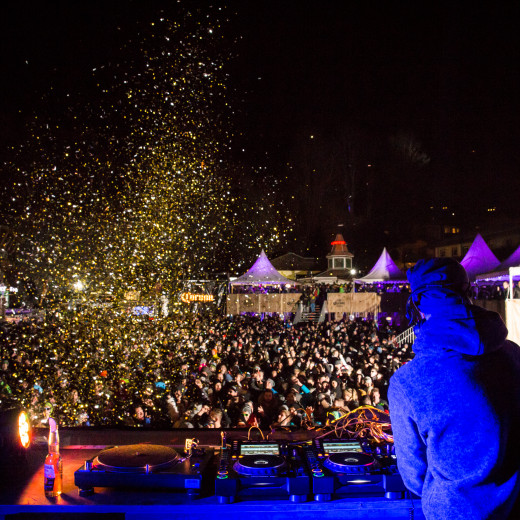 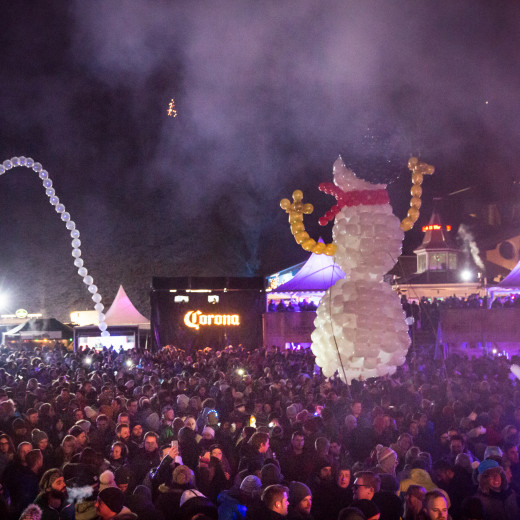 I still remember well my own very first Rave on Snow in Saalbach Hinterglemm in 1999. Colourful guys, electronic music to which you simply have to dance and a very cheerful mood – that was my first impression of this festival. These things have not changed over the many years, and yet Rave on Snow – the Christmas party for techno fans – has grown up over more than two decades. Berliner by choice Thomas Kleutgen, who, together with Bob Shahrestani and a well-attuned team, has been writing the success story of ROS in Saalbach Hinterglemm for many years, is now in his fifties and well remembers the beginnings of this unique festival.

Thomas, 23 years ago ROS relocated to the Glemmtal valley. At that time, after two years in other tourist destinations, you came to stay.

Yes, a winter party trip with 50 friends and DJs quickly developed into something big. It was not at all planned at the time. Today, 80 DJs and live acts play ten different floors for three days. Even though the music has changed somewhat over the years, the original spirit has remained intact. ROS means partying to music outside the mainstream and the EDM headliners and the feeling of togetherness when friends go on a partying holiday together. It is still almost like a school trip. 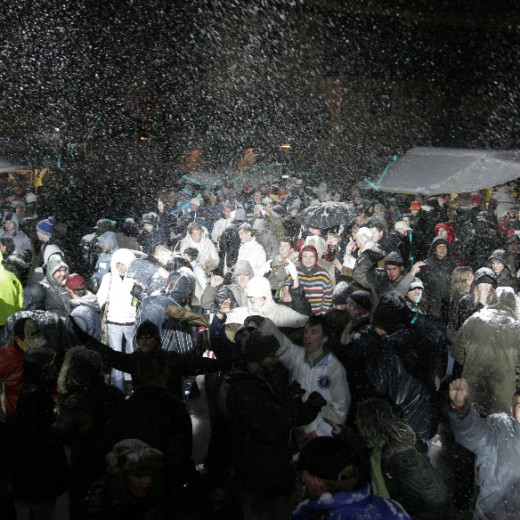 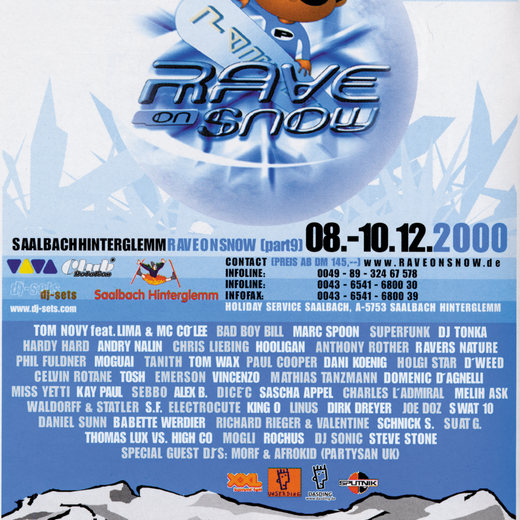 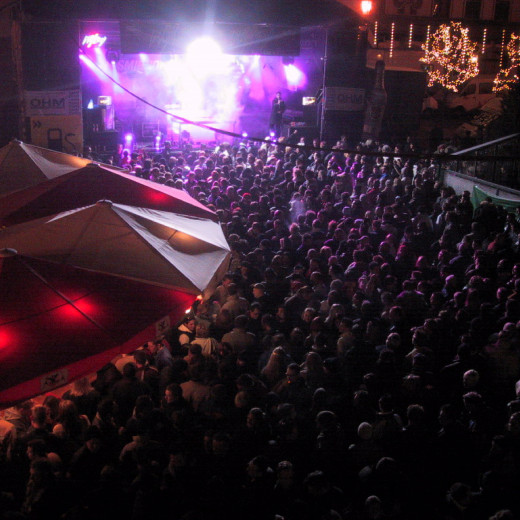 Mainstage in the center of Saalbach in 2002

Over two decades of loyalty to Saalbach Hinterglemm. Some relationships do not last as long. You must have experienced quite a bit at the place.

Oh yes. In terms of infrastructure alone, quite a lot has happened! New lifts and hotels have been built. And some of the hotelier children who I met when they were kids in my collaboration with the hotels are now at the helm themselves at the 4* hotels. That now gives the place another boost of youth. Only once, when the multi-purpose hall, one of our most popular party locations, ceased to exist, did a hint of a relationship crisis come up between Saalbach Hinterglemm and ROS. However, Saalbach quickly unpacked the silverware and presented us with a perfect alternative in the tennis hall in Hinterglemm. The secret to the many years of good collaboration and the loyal partnership: never change a winning team!

In the lineup I find a few DJs who have accompanied you since the initial years. Are there also a few faces in the audience who have “grown up” with Rave on Snow?

Absolutely! There are many attendees who have been loyal to us for more than 15 years, and 60% of our guests are repeat guests. Some fans who were with us right from the start could even take their own kids with them to the festival today! We are also noticing that the demand for 4* hotels has increased considerably in the last few years and that many are increasingly using the weekend for skiing and snowboarding as well. Among the DJs, Domenic D’Agnelli and Pascal Feos have accompanied us on our path for many years. 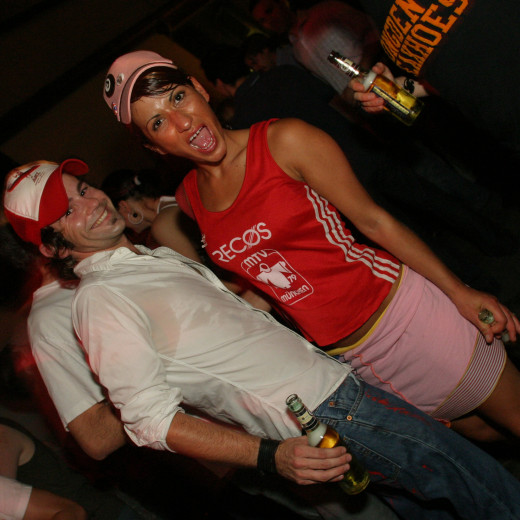 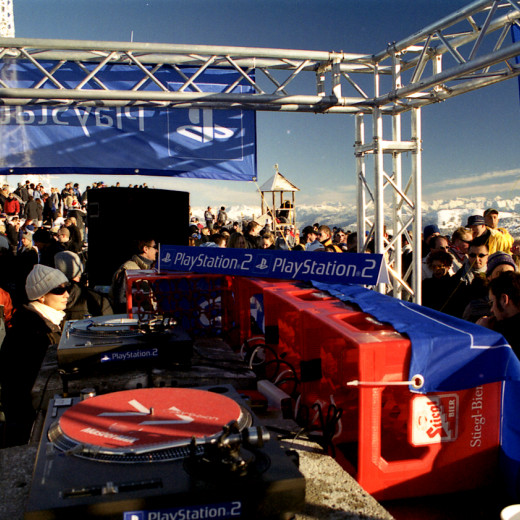 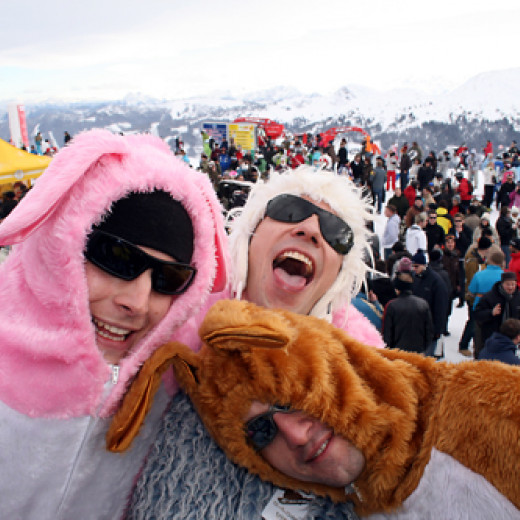 Extreme weather events and personal highlights – what in particular has stayed in your memory?

When it comes to different weather conditions, we have had everything in two decades: onsets of winter with nearly a metre of fresh snow on the day of arrival, minus 23 degrees with icy rain, storms, persistent rain and autumnal green slopes. However, the weather never affected the party mood. An absolute highlight moment for me was Paul Kalkbrenner’s appearance at the summit of the Schattberg. The location was almost bursting at the seams, but despite the bad weather the atmosphere was unbelievable! But I actually get goosebumps every year when I go onto the stage in the village square in the evening and see the crowd dancing and partying. And when the DJs are performing their sets at the Schattberg and the sun is shining and the mountain peaks are covered in snow, as a city boy, my heart leaps.

What is the event like for you personally after a success story that has lasted 25 years?

We in the production team may have grown up, but the atmosphere is louder than ever. Even if I now personally fall asleep at the Schattberg because I have not made it through the whole night as I used to – the good vibes and the basic idea of the event are still the same as they were at the beginning. And, for our team, travelling to Saalbach Hinterglemm for ROS is like coming home. I am already looking forward to the day when the stage in Saalbach Hinterglemm begins to be set up for the 25th edition of Rave on Snow and the team comes together again.