Of hunters, nature and gamekeepers

Given its 47 per cent share of forests, Austria is considered a very densely forested country - and the Glemmtal is no exception. The raw material of wood has always been one of the most crucial income sources in the Alps. In addition to forest management, there is a second, essential aspect - the hunting community`s hunting and conservation measures. We talked to Camilla Schwabl - local landlady, mum of two children and passionate huntress - about traditions, interesting facts and the Glemmtal as a habitat for wild animals.

The hunting ground of the Glemmtal

The hunting area, which is managed by the “Schattberg Hunting Society" which, in addition to Camilla, as the only woman, includes her husband Hannes and six other hunters, is located on the over 2,000-metre-high Schattberg in Saalbach. The Alpine habitat is just as naturally suited to roe deer, deer, chamois, marmots, black grouse and capercaillie as it is to eagles, foxes, badgers, and hares. One major difference to the hunting region in the Großglockner area, mainly managed by Hannes and a colleague, is that the hunting areas in Saalbach Hinterglemm are located near the ski lifts, pistes, and hiking and biking trails. Therefore, it is even more important that we all abide by the rules of the project "RespekTIERE deine Grenzen" a project that tries to minimise the conflict between mountain sports enthusiasts and winter sports and wildlife population in the Austrian Alps. 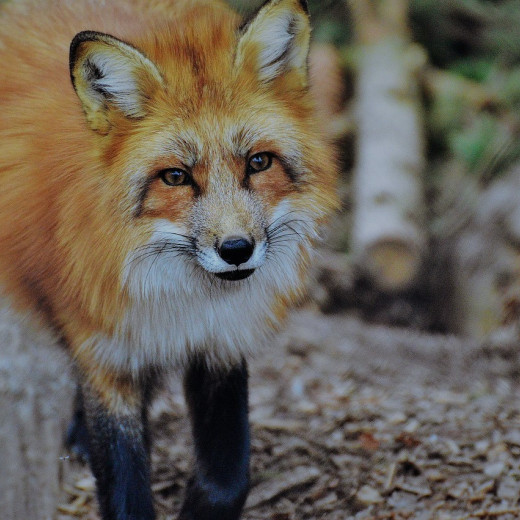 Foxes are smart and adaptable 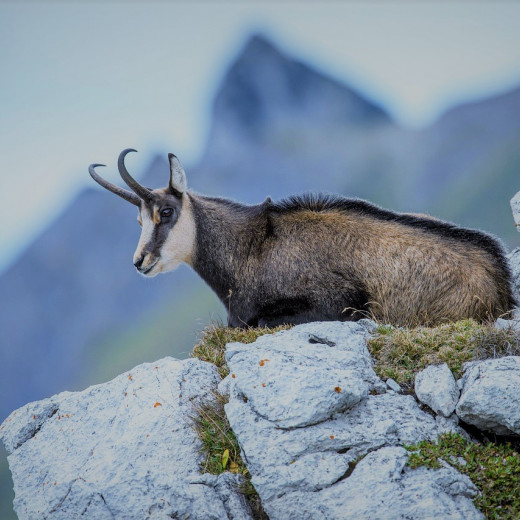 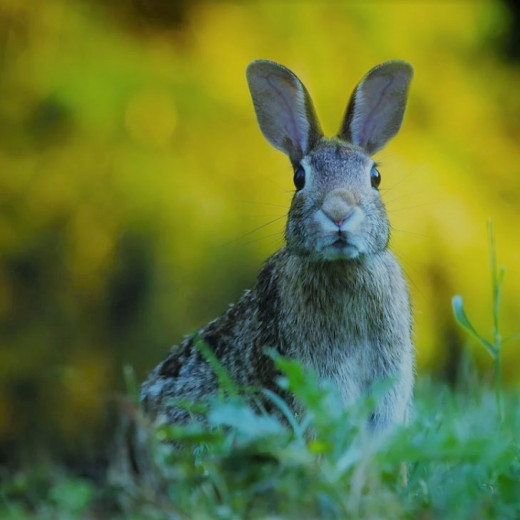 Many rabbits live in our forests and fields

The Hunters' and Huntresses' Tasks - within the yearly cycle

The generic term for the tasks of the hunting community is "Nurturing and- und Maintaining". This philosophy is carried out with the various task throughout the year which requires a high level of passion for this vocation.

...is a particularly challenging time for wildlife. The cold, the snow and the sparse food supply make life difficult for the animals. During the cold months, deer enter a sort of metabolic dormancy. The heartbeat and the organ activities are decreased, and the animals require a lot of rest while they are in this condition. Any non-essential activities are instinctively avoided.

The greatest plea to winter sports enthusiasts: respect the resting areas and resting times of the wild animals. There are protected areas designated for the animals in winter as a vital retreat and recreation area. Please respect these areas and use the publicly accessible spaces for winter sports. The animals' attempts to escape - especially in deep snow - can lead to life-threatening states of exhaustion.

Thus, feeding stations are set up in the hunting areas, which are co-managed by Camilla and Hannes Schwabl. The wildlife population is safeguarded. The forest is protected from game damage with the regular feedings, which begin shortly before the first snowfall and last until spring. There is no hunting in the vicinity of the feeding stations - in addition to monitoring the animals, the area is used to conduct a population count.

The hunting season begins with the restoration of the elevated hides distributed throughout the hunting region. This task is incredibly time-consuming and labour-intensive after a winter with heavy snowfall. The hunting vantage points are erected with local wood in purposefully chosen places perfectly integrated into the surrounding landscape. 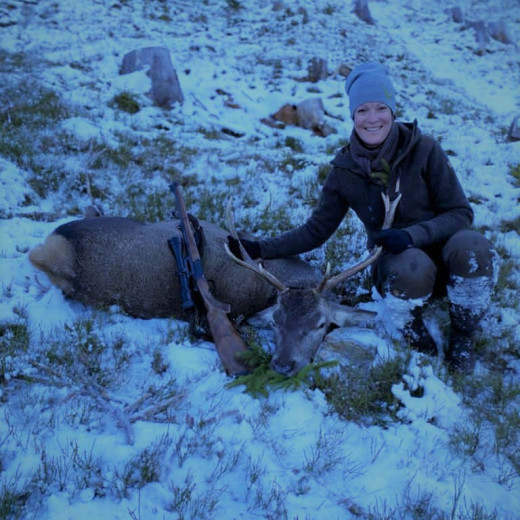 After the successful hunt

Throphies are registered with relevant data 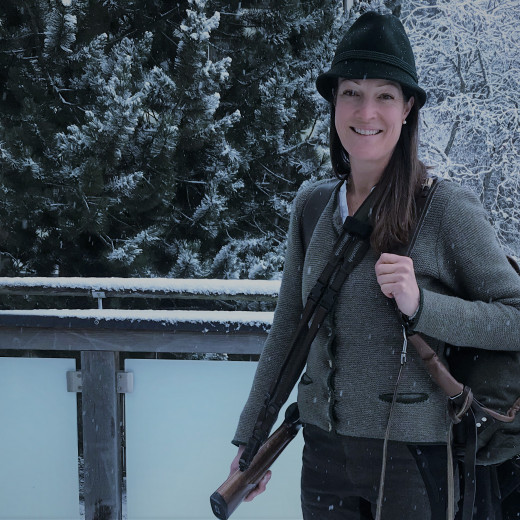 The official shooting seasons for the province of Salzburg for different game species commence. The hunting regulations govern the necessary measures to keep the eco-system in balance. The animals' cycles such as rutting, gestation, birth and rearing are considered not only in the regulations but also in the various circumstances of the hunting regions. Game stock management regulations are necessary to preserve the natural fauna and flora. Young trees need to be protected from peeling, and an excessive population of animals leads to diseases and epidemics.

The wildlife feeders are loaded with hay. The often-deep snow during the winter months makes it more difficult to reach the feeding areas - for this reason, the dried grass is already placed there in autumn and only needs to be replenished in winter. The feeding of the deer is gradually introduced in autumn.

With the dense settlement of humans throughout Europe, also the behaviour of animals has altered. Several centuries ago, deer selected the mild meadow areas as their preferred habitat - with the development of these regions, deer and many other wild animals retreated to the mountains. With the extinction of natural predators such as bears and wolves and the harsh winters experienced in the Alps, the responsibility for the economic balance in nature falls to man. For this reason, care is taken to maintain a healthy population - with feeding in severe winters and with carefully controlled hunting. All trophies (antlers, skull, and jawbones) of a hunter are checked and evaluated annually.

For Camilla and her husband Hannes, it is crucial to prepare the venison themselves. The meat is processed and prepared to the very highest quality in their hotel and restaurant. For years, one has been aware of the increasing demand for high-quality products with more sustainable origins - people are paying greater attention to the responsible and respectful treatment of animals. 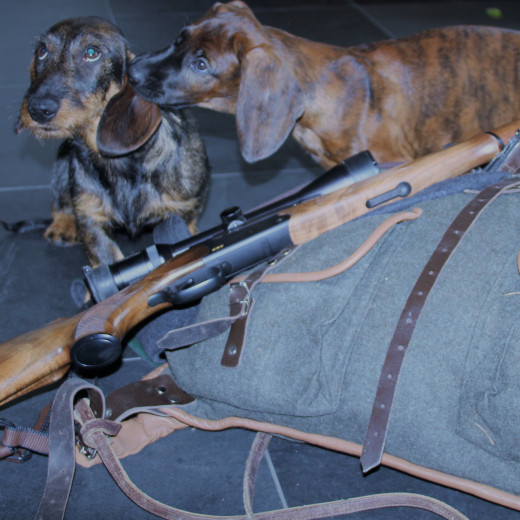 The dogs Viggerl and Django are ready 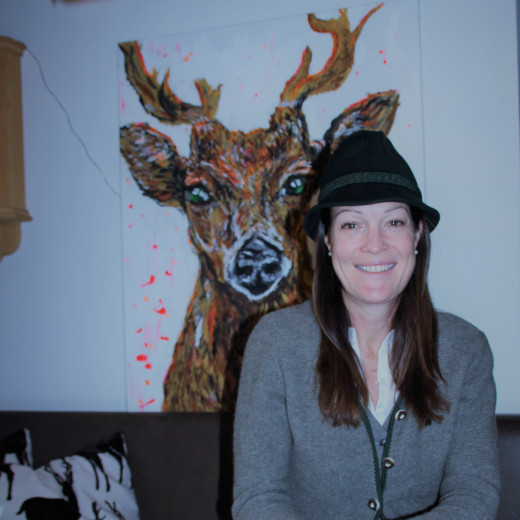 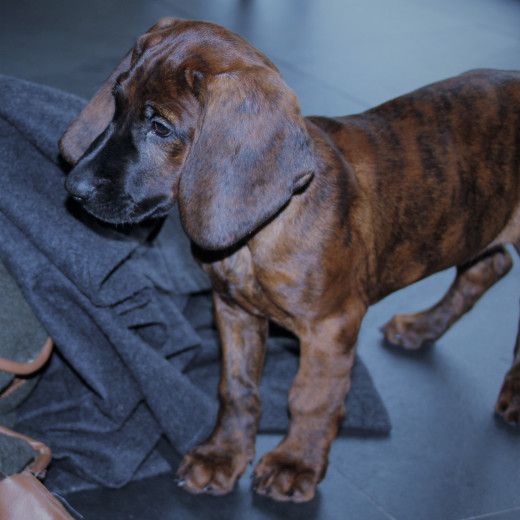 Django is going to be a hunting dog one day

As experienced dog handlers, Camilla, and Hannes Schwabl work with specially trained hunting dogs. The dogs are fully integrated into the family and assist with the tracking during the hunt thanks to their excellent sense of smell. A couple of weeks ago, wire-haired dachshund "Viggerl" and Hanoverian bloodhound "Django" joined the family - and will shortly commence their training as hunting dogs.

Camilla Schwabl considers hunting more than just a hobby - it is a passion and an important role. Her grandfather was a professional hunter - so perhaps this love of the native forests and connection to nature is in her blood. As her husband Hannes is also a dedicated hunter and spends every minute of spare time in the forest, Camilla decided in 2012 to take the hunting examination and enrolled for the long-term course, which lasted six months. Her most important message is that if we all follow a few simple rules, nothing stands in the way of successful and relaxed co-existence.