A hit in the huts: Kasnocken

Savoury, tangy and an unmistakably cheesy aroma — that is how we love our favourite hut dish from SalzburgerLand. Served in the typical cast-iron pans, “Pinzgauer Kasnocken” (small dumplings with melted cheese from the Pinzgau region) makes for a perfect boost of energy right before getting back to hitting the slopes in the Skicircus Saalbach Hinterglemm Leogang Fieberbrunn.

With or without onions? When it comes to Kasnocken, this is where people go separate ways — there are those who insist on them and those who don’t want them near their plates. And thus, each and every cook has his or her very own approach when it comes to making the traditional dish. Nevertheless, there’s one thing they all have in common: the low-fat, flavour-intensive beer cheese from the Pinzgau region and the unmistakable “Prinzn”, which is the treasured crust that forms on the bottom of the pan while cooking. Lois Riedlsperger from the Pfefferalm mountain pasture hut in Hinterglemm is quite happy to show how to cook this culinary holiday hit at home. He’s the second-generation hut chef at one of the oldest ski huts in the Home of Lässig, which celebrated its 300-year anniversary in 2017. Whether on the sunny terrace or inside with candlelight and an open fire after a fun but exhausting sledding session — Kasnocken is very popular amongst the Pfefferalm’s international guests. 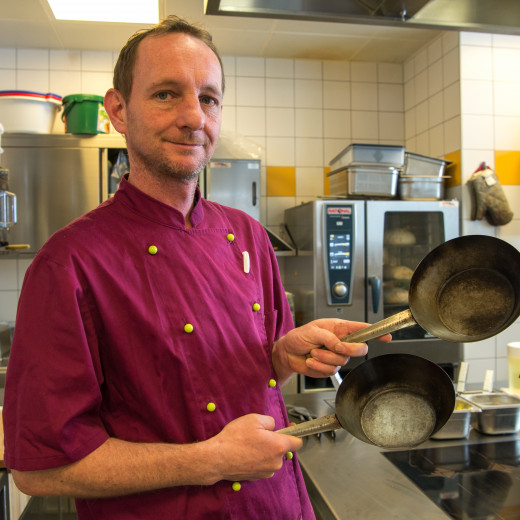 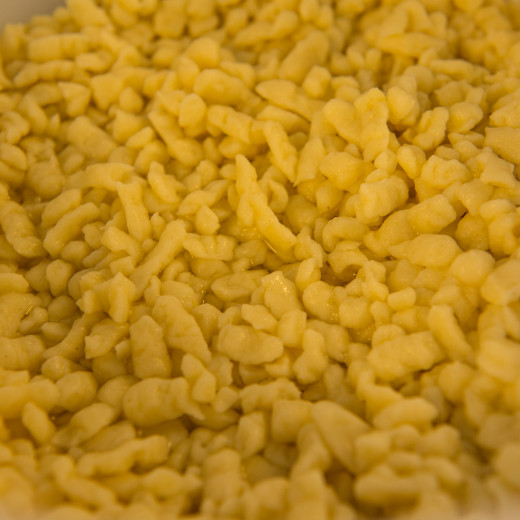 „Nockerl“ are stored in cold water 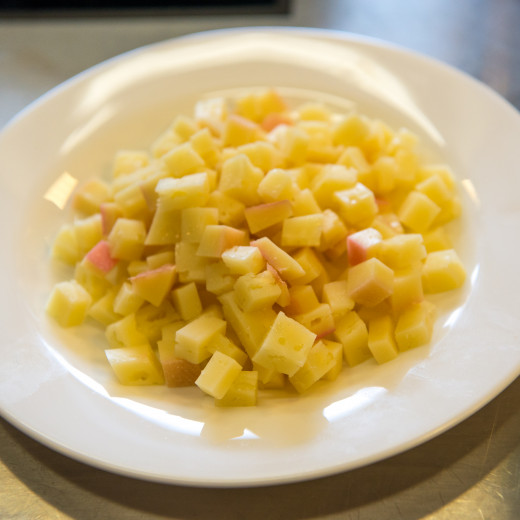 When it comes to the dough, trust your gut

So, why is Kasnocken so popular on the Pfefferalm, which, incidentally, was built near the Reiterkogel mountain in 1717? Lois and his wife Susi are in full agreement and laughingly reveal: “Because we make the dumplings by hand and with love, and because each portion is made freshly in the iron-cast pan before serving it.” Susi, a Hinterglemm native and responsible for around 3,000 portions of Kasnocken every winter season, is happy to show how to make the perfect dough for Kasnocken. “First, mix the soft flour with eight whole eggs and a little salt and nutmeg, then add enough water until the dough starts to drip off leaving little strings. If it is too hard, the dumplings also end up too hard. If it’s too liquid, then the dough falls apart into a mush. Listen to your gut. But after some practice, getting the consistency right gets really easy!”, ensures Susi as she slices the dough into the boiling salt water with the grater, adding, “Preparing the dumplings by hand does require some time and effort, but it pays off in the end!” 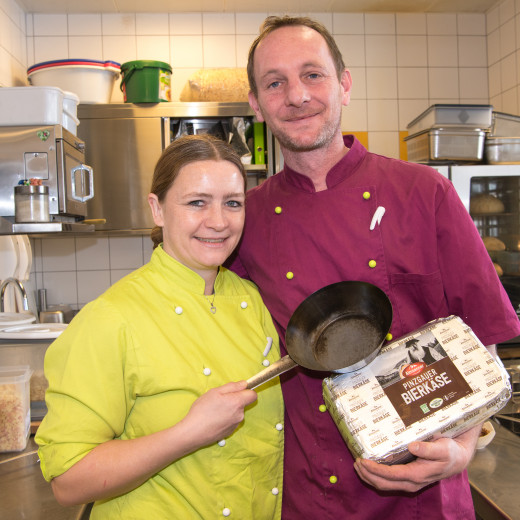 Susi and Lois in the kitchen of Pfefferalm 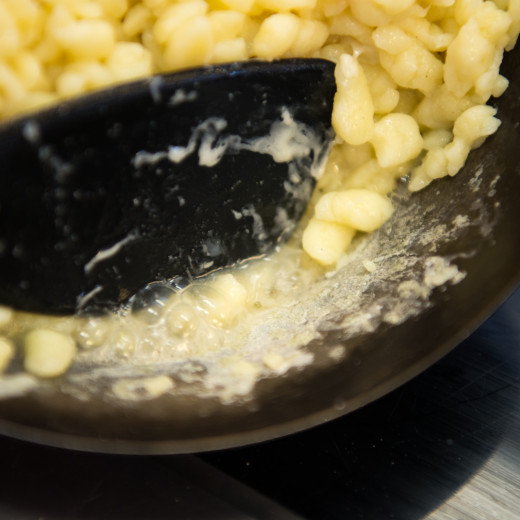 The „Prinzn“ forms on the bottom of the pan 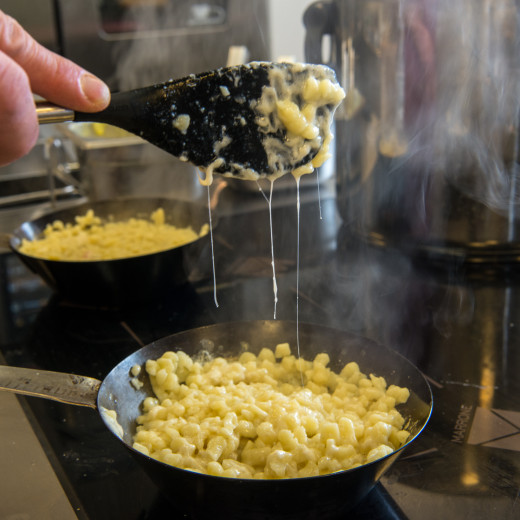 Susi boils the dumplings for around five minutes. Then she drains them and rinses them with cold water. “That’s important because they keep on cooking and get way too soft otherwise,” explains Lois who, in the meantime, cuts the Pinzgau beer cheese into small dice. “The cheese is from a dairy in Pinzgau and is made from milk from around these mountains. The ‘Pinzgauer Kas’ is very low in fat and thus also low in calories. To make sure that the dumplings don’t stick together, pour a little bit of cold water into the pot first. The wet dumplings are then added to a hot cast-iron pan without oil — they won’t burn. Once the dumplings are heated, add the diced cheese and stir everything at high heat. If the cheese starts sticking to the sides and the bottom of the pan, it means that the popular ‘Prinzn’ is being made. Now, all you have to do is make sure that the crispy coating doesn’t burn. Pour some butter that has previously dissolved in a separate pot over the Kasnocken — butter is a flavour carrier and makes the dumplings even more creamy. The finely chopped chives that are added over the Kasnocken at the end are, incidentally, from our very own mountain pasture garden. Now, all that’s left to do is to season with some salt and pepper and the Pinzgauer Kasnocken from the Pfefferalm mountain pasture is done. If requested, we are, of course, happy to serve the dish with home-made fried onions.” 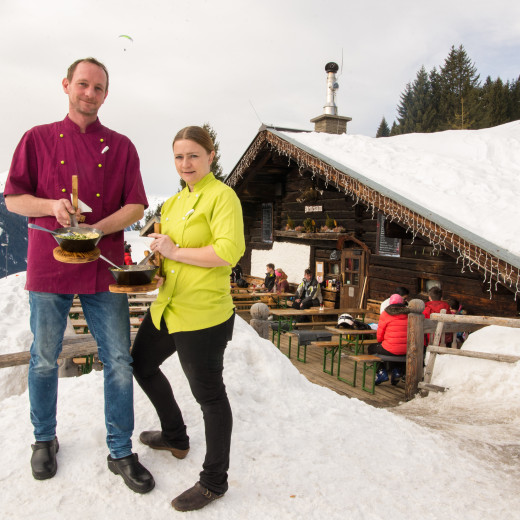 Lois and Susi in front of the 300 year old hut.

Yoni and Kees enjoy the Kasnockn 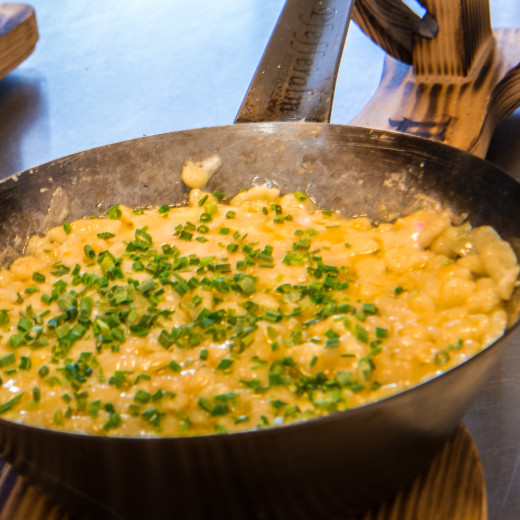 An aromatic scent is in the air and announces the dish — which happens to be completely vegetarian — on the sunny terrace. There, Yoni and Kees from the Netherlands are already excitedly holding their cutlery, for Kasnocken is among their favourite holiday dishes. The two won the Ski Challenge 2017 and have been regulars to the Skicircus Saalbach Hinterglemm Leogang Fieberbrunn for the last 10 years. And they just can’t get enough of the local classic: “Kasnocken provides plenty of energy for a day out on the slopes in the Home of Lässig.” As they dip their spoons into the creamy dumplings and the stringy cheese, Lois explains to me, laughingly, “Kasnocken should never be eaten with a fork! It’s simply impossible to get the hard cheese off the forks when cleaning the cutlery!”

Pinzgauer Kasnocken from the Pfefferalm mountain pasture hut
Ingredients for 5 to 6 people: